Satan's Slaves and the Straight Satans

In doing a little research on both the Satan's Slaves and the Straight Satans I learned that they were two different motorcycle clubs.  Both are said to have been 1%er clubs.  The term 1% comes from the idea that 99% of motorcycle riders are law abiding citizens and the remaining 1% are outlaws.

Informally, in the 1950's, there was an agreement among the 1%ers to agree to certain guidelines, regardless of club affiliation, concerning stealing from one another, rat-packing, etc. and to be committed to biking and brotherhood not as a weekend activity but as a way of life.  The Hells Angels originally went along with this but soon decided that they were committed to no one except their fellow Hells Angels.  This put them in a class by themselves leaving the remainder of the outlaw motorcycle clubs to be known as the 1%ers.

I was able to find mid '60's articles on the Satan's Slaves which legitimizes them as true 1%ers, using the same logo over the years until they patched over with the Hells Angels. 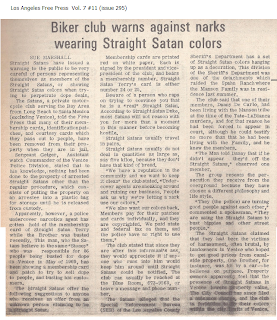 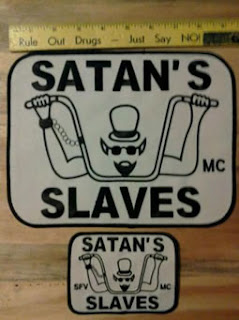 "Satan's Slaves. MC SFV. We do know the Slaves were a well known outlaw club from 1960 till New Years Day 1978. Then they patched over. My ole man got these around the 50th anniversary of the club. They are a memory collection item. Produced around that time.

"A one chapter hard core outfit. Some called them a club. Others called them a gang. A big part of the history of the 1%er. 'Any thing you heard about them is likely true.', one of their ole ladies told my ole man.

"Selling my ole man's collection. He was injured by a violent act but is recovering."

I just read in some book ( maybe the Garbage people?) how the Straight Satans came to the ranch and were gonna tear it up and Sadie said something like "We will take care of the Straights like we did those 5 piggies",,,

Candy,
Was that the time the Straight Satans went to reclaim Danny DeCarlo?

I think so ya orwhut

I just listened to the Fido tape today, en he said Danny DeCarlo was a Satan's Slave.

Candy,
Thanks. I think Vince said the girls lured some of the bikers into the bushes. I took it that they took care of them in a different way.

Matt: I have it on casette tape. It's A nice listen, although he makes some mistakes. He calls Leno Leon for example.

Danny Decarlo was with the Strait Satans not Satans Slaves

I was the kid that took care of every thing in the fields and cleaned the bikes for several yrs at the corner of Carson and Martin. Skip, Carl, Guss ,Anita, Zipper I was there And I have the storys to prove it....68to 72 Manson kicked me out of there twice I was 12.....

There is apparently a Satan's Slaves MC in England today. I have no idea if they are any relation to the CA club in the 60's http://www.satansslavesmc.co.uk/

What was the name of the guy murdered for impersonated a straight satan. Is he the guy found floating in a Venice Cannal. I know his street name was Fat Rat but I forgot his real name.

last saw you dudes while being led hand cuffed, one night by the Lenox Sheriffs deputies, I was down stairs doing something or another, and while they were leading you down the drive, I yelled out "Hold it I am the manager of these apartments, these guys are ok let them go"! They got cut loose and all of you turned out ok! Ron Tromp
Had access to a ranch in the valley hills (pristine). Didn't know at time about Manson crowed except some went to my high school and Lake family father worked at General telephone company (art and display department) for a while. Me I worked after this for Los Angeles Animal control 11th avenue shelter (now south west) I had a call to pick up dogs at Folgers place but turned down for call in progress, anyway these people had the same kind of dogs as my wife and I. A short time later my shelter was raided and I was warned about the safety (I took it as a death threat) of my most precious (wife) whom had a home in Manhattan beach Ca. I was working sort of under cover (military) and tracked the drug trade to these State police, Never to less they made a law of being in danger of being a drug addict 31.006 WIC and smashed me for 7 years bouncing me back and forth CRC Los Angeles Jail and a dungeon under the Los Angeles court house, The rumor was put out I was dead (suicide) and all was lost, for when I came back TO MY HOME TOWN AREA IT Was gone for Airport expansion, my home in Manhattan whom the Venice beach police dept.'s "Basic Car" dept. I rented it on verbal command for a year but they backed out about 4 months later while I was in Jail (same charges). When I looked into this the doors were missing and ALL THE APLIANCES They racked up charges while I was in and out of jail, never took me to court and made me a target up till to day. I had my home in bay area raided (wife and 3 kids taken out to boon docks "harboring a fugitive "Listening to Merle Hager music at time big joke!

O yea I could not tell of my Military service due to the fact it would of been public and off we go to Viet Nam we stayed state SIDE "one hell of a mess as it was".
Any way if I were to tell this story to any one they would not believe me or think I was nuts. I can and will prove all these things if I knew how, for I have photos, records and news accounts for I was ounce a Headlined "Bonnie and Clyde captured" All we did was go into skyways café and buy coffee, the news used my sister in laws first name and my last name for Bonnie. Mr. Ron J Trompeter of Los Angeles.

So I was listening to one of the common Manson YouTube interviews yesterday, and kind of out of nowhere, Manson mentioned something about the Hell's Angels, and that the reporter didn't know about it and wasn't ever going to know about it. So I searched "C.M." & "H.A." and ended up here. Still doesn't explain his statement.

the reason it does not explain his statement is that he never had anything to do with the angels, just more of his pathetic attempts for attention and grandiosity.seriously... you tube interviews. too bad you did not meet him like i did way back before he started murdering famous people.

why are all these manson followers so obsessed with all of us who were either 1%ers or those associated with them. their little band of moronic girls and guys were little more than a blip on the radar of our lives.

Robert Driscoll a.k.a. "Christmas Tree bob", plead guilty to Involuntary Manslaughter and received Time Served and a year in the County Jail. Which he served in Wayside Max.

Undrstmtmtd : When/how did you meet Manson?

I remember as a young girl(1970ish) when I lived in Marina Del Rey. I used to ride my bike up and down the boardwalk and through the streets of Venice Beach. The Straight Satan's were at a burger place one day and my mom approached them and the guys said 'no worries, we'll keep an eye on her' and then I had no worries whatsoever as I rode my bike, red hair flying. I forget the name of the burger place but remember meeting all of the guys of Straight Satan, remember the shavings on the floor of the burger place and the GREAT burgers... lol Thank you guys for keeping an eye out on the redhead. ;)

Id love to chat with you. You can email me at johnnydamaged@yahoo.com.
Thanks, Johnny

We have people at the highest levels of government who dictate environmental policy on the basis that God (by way of the heavily contrived, edited and fabricated "Bible") has given us dominion over the earth, and that it doesn't really matter what we do because the second coming is just around the corner and Christ will clean up our mess anyways.

There are consequences to belief! There is nothing noble about standing back and "respecting" madness. Acting as if any belief is equally valid because it can't definitively be proven false is itself madness. We must insist upon proof for fantastic beliefs