Back to the Barker Ranch 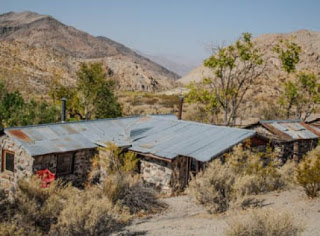 The haunting face of Charles Manson is a tough thing to shake from your memory, even if you"ve only seen it over a television screen. The thought that there may be murders he orchestrated back in his heyday that are unaccounted for is something even harder to digest.

In 2008, the Inyo County Sheriff"s Department and the National Park Service authorized a dig at the Barker Ranch, the hangout where the Manson Family reportedly went following the Tate-LaBianca murder spree of 1969.

The dig was authorized following the request of scientists and now-retired Mammoth Lake Police Sergeant Paul Dostie, whose dog, a black Labrador named Buster, is trained to search for human remains. Buster had alerted on several spots at Barker Ranch, leaving Dostie and others to believe there were human remains buried there. At the time of the dig in May 2008, the government agencies only authorized digging to depths of 3-4 feet. Nothing was found, but the questions on many people"s lips since that time has been, "Did they dig deep enough?" and "Wouldn't someone like Charlie Manson know how deep a body has to be buried?"

Debra Tate, sister of the murdered Sharon Tate, has alerted the media about the existence of tapes recorded by attorney Bill Boyd back when members of the Manson Family were being rounded up and charged for the Tate-LaBianca murders. Boyd represented Manson Family member and convicted murdered Charles "Tex" Watson who confessed to the murder of Sharon Tate.

According to an interview with author Tom O'Neill, of which The Sheet has obtained a transcript, Boyd said, "But he [Watson] was — I was impressed — he was extremely candid and he told me about a bunch of other people Manson had killed …"

Boyd clearly stated, however, that Watson did not implicate himself whatsoever in these murders. They were murders that Manson had committed or orchestrated, but Watson was not involved.

Boyd died in 2009, but the tapes remain. There are reportedly 20 hours of tapes. Currently, however, the tapes are tied up in bankruptcy court in Texas. When Boyd passed away, his son was unable to keep the law firm afloat and the firm ended up in bankruptcy. The tapes, being property of the firm, are being held up in this process.

Debra Tate told The Sheet in an interview this week that she had told the Los Angeles District Attorney"s office of the tapes in the spring of 2012.

"The DA did elicit interest from detectives in the LAPD [Los Angeles Police Department] and they were trying to get the tapes from bankruptcy court," Debra said.

The LAPD subpoenaed the tapes and a bankruptcy judge in Texas declared that there was no reason not to give the tapes to the LAPD.

"They were going to get the tapes," Debra said. "And then a federal judge put an injunction on LAPD until he looked at the tapes and reviewed the legalities."

One of those legalities is attorney/client privilege. Plus, Watson is reportedly claiming a fifth amendment violation if the tapes are released.

"He"s saying he would be incriminated if the tapes were released," Dostie explained.

As for the attorney/client privilege claim, both Debra Tate and Dostie said Watson gave this privilege up years ago to sell a book about his escapades with the Manson Family.

"About 14 hours of the tapes were used in the book," Dostie said.

"You can"t release attorney/client privilege and then take it back, which is what Watson wants to do by invoking the fifth," Debra added.

Debra recently decided to release the knowledge of the tapes to the media because she was tired of waiting on the legal system.

"The LA City Attorney should have filed a suit against the federal court [after the federal judge stepped in], but they didn"t do anything for three months," she said. "Apparently they were looking for a bankruptcy attorney but they didn"t need one when the highest bankruptcy court in Texas had already deemed the release of the tapes OK."

Debra closely watches what is happening with the members of the Manson Family still sitting in prison and attends each member"s parole hearings. She feels the release of the tapes would be useful in the implication of those Family members who may not have been involved in her sister"s murder, but could have participated in other murders. The tapes would also be useful in keeping those behind bars right where they are.

One Manson Family member has been released from prison and a second may be on his way out as well.

Lynette "Squeaky" Fromme was released in 2009. Today, the release of Bruce Davis, a Manson Family member, lies within Governor Jerry Brown"s hands after the State"s Board of Parole Hearings approved Davis"s release.

According to abclocal.go.com, "A judge sentenced Davis, now 70, to life in prison in 1972 for his role in the murders of two men. He was not involved in the infamous Sharon Tate murders.

"After serving more than 40 years in prison, the parole board is recommending that Brown approve Davis" parole. The governor has 30 days to make a decision [which will be up at the end of February]. His options are to affirm, decline, modify or decline to review, which would allow the parole to take effect, an official said."

"These people [Manson Family members] are still communicating and bonded together," Debra said. "They are all still connected to Charlie. It will be business as usual with each individual that is released."

Debra said that she sits approximately six feet from the Manson Family inmates each time they come up for parole.

"Their personas have not changed," she said. "They still show complete sociopathic tendencies. "

"Those tapes could change the climate [regarding parole]," she concluded.

Not first time tapes have surfaced

This isn"t the first time the knowledge of the Watson tapes have been brought to the attention of authorities.

Besides the use of the tapes for Watson"s aforementioned book and Debra"s alert to the authorities last year, Dostie talked about and quoted from the transcript from O"Neill"s interview with Boyd where the tapes are thoroughly discussed, during a presentation to the Inyo Sheriff"s Department and the Death Valley National Park Service in 2011. Dostie made the presentation in an effort to be allowed to dig deeper at the Barker Ranch.

Dostie also contacted Senator Dianne Feinstein"s office about his concerns of bodies buried at the Barker Ranch. Feinstein responded by sending him a letter her office had received from Death Valley National Park following his presentation. In the letter, the Park, under the direction of then-Superintendent Sarah Craighead, stated that after listening to Dostie"s presentation and reviewing additional materials he provided they "found no compelling reasons to re-open the investigation."

The Park Service was assigned to investigate Craighead, who has since been relocated to serve as Superintendent of Mammoth Cave National Park in Kentucky. Other than that, nothing else has been done.

After five years Dostie still believes there are bodies at the Barker Ranch. Why? He and Buster have been traveling the world for the last five years collecting data to prove it.

"We"ve gone around the world and have soil samples from human decomposition sites [that Buster has alerted on]," Dostie said. One of these sites is the mass grave containing more than 40 Marines on Tarawa, which The Sheet wrote about in May 2011 (Casualties of War).

Other sites include soil taken from directly below the remains of murder victims Lynsie Ekelund and Kathryn Barrett.

"Scientifically there is no other explanation than multiple human burials at Barker Ranch," Dostie said. "They didn"t dig deep enough."

Has Barker been rebuilt?

Maybe Buster could sniff around Debra's house and find her father's ashes.

Im sorry Debra lost her sister and what these people did was very bad. But to say they are just waiting to pick up where they left off if they are released is silly. We dont know for sure what anyone will do, but after 40 plus years in a cell, they might just want to enjoy what little life they have left, if released. I also find it hard to believe they are displaying psychotic personas at their hearings. Maybe thats how people act after being locked up for over 40 years. Just my opinion.

i was wondering if these tapes are released and do have info. pointing to other murders and murderers would that make tex a snitch to the other inmates?