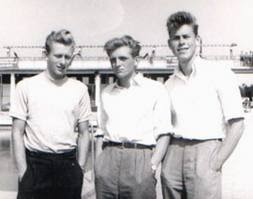 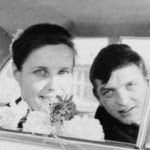 Voytek with his wife

I know this is rude, I know he didn't deserve to die. But according to my research. He was a top shelf scumbag. Gibby could have done much better.

You're right about that, he wasn't a great guy. Maybe that's why the damage done to him was so much more severe than the others.

@ Mandy- are you a fucking idiot or just mentally retarded? The damage done to him was because he was strong and he fought to live. Who are you to judge the dead who you never even met? @ Keith - "according to my research" = "I read teh internets mommy". Fuck right off the two of you.

Quick pile on the Col. while he reloads LOL!

His wife was pretty.

I agree, Carol. Their granddaughter is quite a looker, too. Go to Google images & search "voytek frykowski granddaughter".

I think Voytek had a son, not even a teenager yet at the time of his dad's murder, raised at home in Poland by the mom. The boy looked exactly like Voytek. I think he died young, like his dad, and I also think he was supposed to receive some sort of financial settlement from funds Atkins and others made from book deals, songwriting(?), etc. Does anyone know if he or his mom ever received any of this money?

Just found this article about the money Frykowski's son eventuall received from the songwriting royalties.
http://www.nytimes.com/1993/12/26/us/victim-s-son-gets-manson-royalties.html
There is also information about this under the Voytek Frykowski article in Wikipedia.

Matt,
I had better luck searching for Agnieszka Frykowska. I hope I found the right lady.

Thanks, Matt. I google searched and actually found a picture of Agness on this blog from 2010 under the post "Bartyk Frykowski Son of Voytek."

Keith got so butthurt he came over to my blog to call me a "limp dick fag" and make me cry. Boo hoo homophobe made me cry!

ColScott said...
Keith got so butthurt he came over to my blog to call me a "limp dick fag" and make me cry. Boo hoo homophobe made me cry!

Wipe those tears away Colonel.
I hope your o.k. ;)

Col said: "The damage done to him was because he was strong and he fought to live."

Pretty much. Didn't Watson describe him as "enormously powerful" or words to that effect? He sustained the damage he did due to an intense, vicious struggle in which Watson actually had to fight to kill him. It's a pity Voytek wasn't able to do more damage to that genuine "top shelf scumbag," Tex.