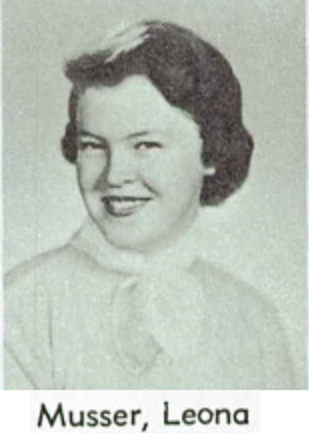 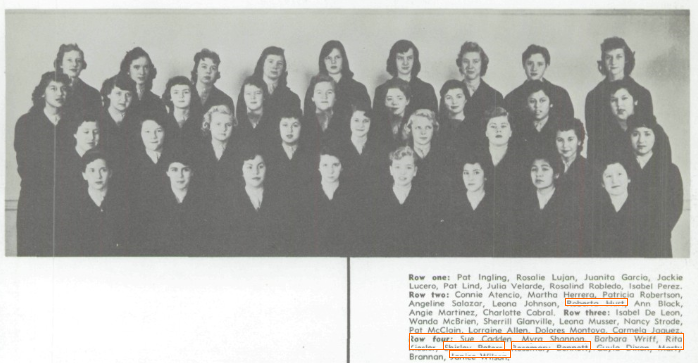 ﻿
The pictures are from Leona's junior year of high school in Colorado.  The year is 1956 and the group picture is the pep club.

Charles Manson and Leona Musser were married in the Spring of 1959 in California.  They had one child, Charles Luther Manson.  I had originally thought that Charles Luther's middle name was probably after Charlie's Uncle Luther but in researching I found that Leona's grandfather was named Luther and both her father and brother had Luther as a middle name.

Leona filed for divorce Jan. 6, 1964. The grounds for the divorce were conviction of a felony, by Manson, and extreme repeated acts of cruelty.  Manson was served the papers for divorce later in the Spring while imprisoned at McNeil Island, Washington.

Leona filed for divorce Jan. 6, 1964. The grounds for the divorce were conviction of a felony, by Manson, and extreme repeated acts of cruelty.

I am sensing a pattern to follow over the years with Mr. Manson and women.

pretty girl...who is she reminding Patty of? Someone from TV...

Married to the Face of Evil for five years!! Leona has gotta have some tales. You wonder what Charlie's rap was like back then - if it was as racist and anarchistic as it was in the late 60's.
And I have read that you have to pay child support even if you are incarcerated. How did Manson escape having to do that once released from prison? Did Leona ever press for it?
Nice job Deb.

Panamint Patty said...
pretty girl...who is she reminding Patty of? Someone from TV...

In the new Manson File book, Schreck states that Leona was her street name. She named herself after her favorite John, Leno LaBianca.

It sounded believable when I read it though.

That's the way that entire book reads. A total 900 page pile of dookie.

Grump thanks for the info. It was an unintentional debunking of Schrek on my part but happy to have done it!

..and so does the Grumpfrompahrump!

Hey Grump,
I saw your name and on a lark, Googled your fair town. You guys seem to have more prosritutes than rain. It must be an interesting place.

Orwhut, don't get him started...

Why Matt? Does Grump like to talk about rain fall?

The Grump can converse on many topics including the weather, but he'd rather "ask them about their shoes." LOL

Is this the mother of Charlie's son who got blown away by a shotgun ?

I would love to see Liz and Patty TRY to walk in those shoes!

William Marshall- No, that was Jed White son of Rosalie, Manson's first wife. Jed was not Manson's son but Rosalie's second husband's son. He was born 4-4-59.

Sad story. Jed, age 11, was accidently shot in the stomach with a 12 gauge shotgun by a playmate also age 11.

Jed was a half brother to Charles Manson Jr. aka Charles Jay White.

I don't see any males in the pep club. Was this an all girl's school?

William Marshall The son who committed suicide was Charles Milles Manson Jr. aka Charles Jay White. He was the son of Rosalie, Manson's first wife. He took Rosalie's second husband's last name and apparently changed his middle name too. Jay, as he was called by his family, committed suicide within days after his divorce became final in 1993.

Rosalie's obituary says that all three of her sons predeceased her. Jed died at age 11 and vital records bear that out. I also have a newspaper article about the accident. Besides Jay and Jed there was another brother named Jesse. I have been unable to find any information about his death, no vital records or newspaper articles. Jed and Jesse were not Manson's sons though.

Perhaps what you read was about a different son entirely.

Orwhut the boys pep club was called something else. Looking through the yearbook, the school seemed to separate the boys and girls in a lot of the group pictures. It was the mid '50's and raging hormones were not allowed, I guess!

Thanks Deb. There seems to be a trend of separating the sexes in education developing again, these days.

Thanks Debs always a great source of information So I take it that it was just urban legend that the son committed suicide after a visit with
Charlie in prison ? Read that on the web somewhere awhile back

William as far as I know it was the divorce that drove Charles Jr. to suicide. It never ceases to amaze me that people feel the need to make up stuff surrounding the Manson saga as if the documented story wasn't bizarre enough.

Generally when I am told something or read something relating to the Family I will do my best to try to verify that info by documented means. Newspaper reports are helpful but not always entirely accurate, though they can confirm if a particular thing happened at all.

So interesting. Whatever became of Leona? She does look very pretty to have been hanging with CM although we all know how girls like bad boys!
Also,what became of Leona's Manson spawn?
Good job, Deb, you are the master! :)
For the record, it has been raining a lot in my town and I am unaware of any prostitutes in the vicinity!

Heidi S said...
For the record, it has been raining a lot in my town and I am unaware of any prostitutes in the vicinity!

Lets see now, witches melt and mogwais turn into gremlins. I wonder what water does to prostitutes?