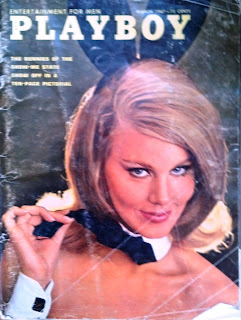 Another cool thrift store find! This time it was Patty and not Mom-Patty who found it. This is the issue of Playboy where Sharon appears "semi nude" (i.e., look close and you can see nipple). The photos were taken by "Polanski" which I found odd, why didn't they use his full name? Is he one of those people who only need one name, like Beyonce, Prince and Cher? Whatevs.

The pictorial is obviously promoting "The Fearless Vampire Killers." You have probably seen these before, and wondered where they came from. Also there was a huff a while back when someone said Deb Tate said her sister was in Playboy when in actuality, she never was. Well, here she is. She is not the centerfold, maybe that's what the stink was about. Sharon's photos are fairly tasteful while Deb's Oui spread was not as, shall we say, demure. Can't post that here without a big yellow happy face over her business end.

Sigh. Patty digresses yet again. For your enjoyment, "The Tate Gallery" from the infamous March, 1967 Playboy Magazine! 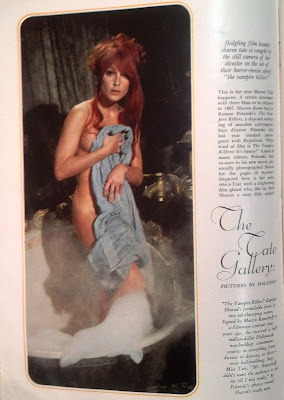 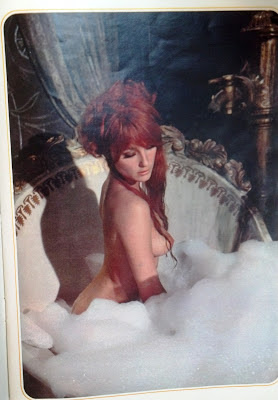 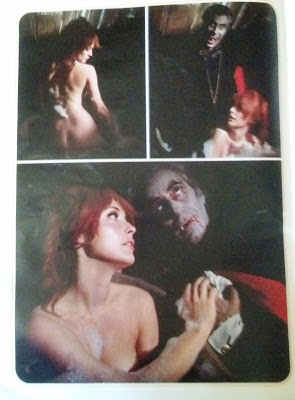 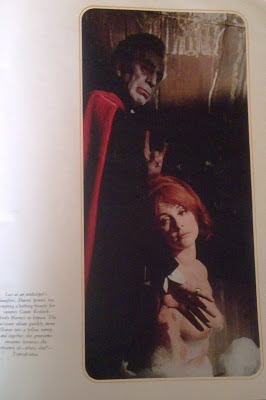 She was incredibly beautiful.

I would think even gay men were attracted to her?

Her beauty is timeless. Every time I see a pic of Sharon, it doesn't hit me right away that it's Sharon and she's long gone.

If she were alive today, no doubt, she would be stealing all the covers on the rack.

Who's occupying the rack these days...hmmm...someone who's first and last name starts with 'K'...?

It's very sad what has happened to pop culture in this country since the '60s and '70s.

Nice find Miss Patty I remember reading in Restless Souls Col. Tate was none to happy over these pics can't imagine what he thought of the sisters pics in Oui there pretty hardcore

With red hair I think Sharon resembles the young Debra. Debra was a real beauty in her youth.

Great find, Patty! Your right, the layout was just more advertising for the movie.

I found the text in Debra's layout just about as dreadful as the pictures.

She was beautiful but these pics are TACKY! She was better than this. I think Roman cheapened her.

I remember lusting over these pics freshman year in high school (after "borrowing" the mag from my neighbor).

I searched the web for the High Society pics of Debra Tate to no avail. Does anybody know where to find them?

Manson walked out of Terminal Island in March, '67.

I wonder if one of his first stops was to a magazine stand in San Pedro...

it coulda happened that way! not really but...ok lol.

The angry nun is temporary until I find the perfect pic. It's actually a cool little windup toy that shoots sparks when she walks.

Sharon was very beautiful both inside and out.
Just imagine all the photos that would have been taken in the years to come.