From a blog member- This just screams Charlie does it not? 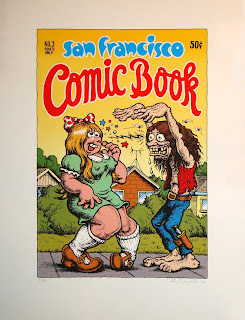 It screams Crumb, Beeocch. Where U at? xxoo

I wonder if that was the same artist who did the album cover art for Big Brother & Holding Company's "Cheap Thrills" record? My parents had that album, and I would always look at it, because if the cool art. It looks like the same artist, maybe.....

Ann,
You got me thinking about my dad's albums. They were 78s.

I bet Ann is too young to remember 78's.

The comic and the "Cheap Thrills" cover were both done by R Crumb.

Crumb is still around having published "The Book Of Genesis Illustrated" in 2009.

I’ve been sitting on this long enough, and decided to add another theory to the menu. This is “MY” theory (yes, I own it exclusively) and will insist on the personal possessive representation of this item from this time forward. I realize this only occurs in certain select (code for: bat shit crazy) subjects and the Manson crimes certainly fit that parameter.

As some people are aware, some of the victims were identified as having consumed some bland food just before their deaths. I feel this indicates they were in fact food users and have found ties to food dealers, and a network which was ripped off. The signs left behind are simply too staggering to ignore, and may take several days to digest, but this should give the more intelligent crowd something to chew on.

According to the ‘LIFE’ magazine article, Patricia Krenwinkel’s favorite haunt was a Big Boy coffee shop. Is it a coincidence that this ‘coffee’ shop’s name is also an anagram for GIbby (drop the O)? Of course not, the odds of Gibby and coffee being associated are simply too profound to ponder, lest one’s cranium implodes. And what was Krenwinkel’s nickname? That’s right, Big Patty, as in hamburger, like Hamilton Burger from Perry Mason, and Mason is a jar which stores…. Food. I’ll give everyone a moment to rub down your goose bumps.

Where exactly was the phrase Healter Skelter scrawled? A refrigerator door. Could this be any more obvious? Helter Skelter is a clue pointing to the White Album which includes NOTHING about race wars, but contains a veritable cornucopia of food references. Onions, pies, and truffles are featured prominently on this album which had percussion performed by Ringo Starr, who is clearly a surrogate for Randy Starr (Same number of letters and sequence of consonants and vowels) which points directly at Spahn’s Ranch. There’s simply no denying these relationships.

What were many of the inhabitants at Spahn’s doing on a daily basis? Dumpster diving for food, food which the grocery stores felt did not meet their standards. After months of eating dumpster food from the wealthy dealers, Manson decided to start a food war and force prices down. He sent the crew to Cielo specifically for Folger. It should be patently clear why Big Patty liked Gibby’s coffee shop so much and now it has come full circle.

The natural choice for the next day’s mayhem would be the LaBianca’s home since they were the owners of Gateway Markets, which controlled the flow of food throughout the Inland Empire. With the combined killings of Folger and Leno, the entire grocery industry became nervous and immediately began issuing double S&H Green Stamps on every purchase.

But before the true motive could be discovered, Bugliosi came up with this harebrained Helter Skelter idea which quickly gained acceptance, in spite of the more obvious, linear, and well attributed food fight.

Well there you have it; spoon fed from a silver platter, and hoping some day ‘The Family’ will receive their just desserts.

You're back! And with yet another great post.
Food for thought, as always. Pun intended. Cheers!

Farf,
I guess you realize that since you've let this out of the bag, the Manson blog world will never be the same again.

Born in 74, and do remember 78's, because my parents have a huge collection of records, including all the Beatles, Rolling Stones, etc. I love looking at them. My parents were hippies!!!! :-)

I failed to mention that Mama Cass, who lived next door (helloooo) to Folger, was suspected of having a substantial addiction to food (unconfirmed), and I believe Pic Dawson may have been her supplier. We will never know since she OD’d on the stuff in London, forever silencing a witness to the Manson food connection.

Shorty Shea had worked for and was going to work again at Leslie Salt, when he was killed. No doubt the constant reminder of salt (used as an ingredient AND condiment for food) clearly displayed in a glass, topped with a perforated cap, was too much for Manson to endure. Manson believed killing Shorty would have disrupted the fragile and limited salt supply in the US, further amplifying the discourse in dining.

The connections are there for anyone to observe, who is pure in spirit, and open of mind.

Who is the farflung?

I'm a huge advocate of comic relief and I'm nominating you for class president!

You have a great chance of winning as we don't subscribe to electronic voting around these parts.

Max Frost said...
Who is the farflung?

Farf is a masked man who makes us laugh and think, and then he disappears.

We should get in the habit of leaving some chocolate milk and cheese on the kitchen table - maybe he'll stick around...

Suddenly I'm hungry I don't know why. Makes about as much sense as some of the other theories out there.

As both CMM and the great R. Crumb were both residents of Haight-Ashbury in the summer of 1967, I've wondered if they ever crossed paths. That R. Crumb comic indeed has reminded me of CMM.

Matt,
Does Farf have a friend with a raven on his head?

While you guys are discovering R. Crumb & his depictions of Charlie ...

Charlie wanted to start a food war? He WAS crazy. (Bugliosi completely missed this motive.) And we all know that "Saki" is contained in the word "Atkins". How about Food Stores threw food out because it was past the expiration date? (I wonder if Bugliosi is reading this.)

The object of Crumb-Charlie's desire appears to be a standard issue bodacious Crumb Girl, like Patty herself. Crumb girl is a readhead, which fits Charlie's MO, but she is also much more curvaceous than what ended up on the ranch. Mebbe they all started out this way before the "dumpster diet."

BTW Crumb has/had a trippy ass brother who could be seen on SF sidewalks in the 1990's perched on a bed of nails, eyes rolled up in his head and asking for a bit of spare change. What a character. Patty wonders if he's still around?

A wee bit of perspective and history on LA in the 60’s.

I blundered upon this video which illustrates some of the varied and rich history of Sunset Blvd:

This two minute journey begins at roughly Sweetzer Ave, heading east, and facing south. You can see the address of 8272 at the beginning, so follow the timeline and enjoy a journey from 1966.

(0:12) According to the sign posted on this building, there is a “Talent Strip Contest EVERY Sunday!” Yep, nothing like getting naked in front of an appreciative audience on the day of rest. Done it, done it many times. Let’s continue…

(0:30) The Tudor themed building was among other things, a pub with a happy hour and ‘late dinners’.

(0:45) The Do-Right emporium is easy to spot with a rotating moose, holding a squirrel waving a pennant. So… 45 seconds into this journey and one passes a strip-tease club, Tudor tavern, and a spinning ruminant holding a rodent; and some people still felt a desire to drop acid.

(0:54) The Plush Pup represents that uniquely American architectural statement known as ‘Googie’. Saw tooth rooflines, round stepping stones, and turquoise colored, lily pad-esque umbrellas announced something good would be found at this location. I believe there was even a genre of Googie music, or what I associate with these restaurants:

(1:18) OK, up to this point you have been immersed in the mid 60’s culture, music, and commerce; you’re welcome. But what lies ahead is a ground zero example of just what made hippies such targets of fear and loathing, watch and remember.

(1:30) This post apocalyptic motif was once the site of Pandora’s Box night club. In spite of the existing taverns and nudie bars in the area, Pandora’s Box drew the ire of local residents who complained about the constantly loitering tribes of damned, dirty, hippies. The hippies responded with protests and ‘The Man’ responded with eminent domain. This action left the club condemned, graffiti clad, trash strewn, and occupied by those dirty filthy hippies. At this point, the average person may have considered a different place and cause to hang their hat upon, but not the hippies. By the end of 1966, Pandora’s Box was razed and replaced with a long needed….. traffic island. As one can see, the nostalgic 60’s, filled with peace and love already contained the seeds of its destruction as early as 1966.

What is that woman selling at the street corner? Could it be issues of the Freep? Her easily distracted demeanor, hair dithering, and general sensory overload appears little different from many a contemporary lass today, except meth won’t give one the drive to sell newspapers.

That is all, you may return to your texting so you can make a reservation at an Olive Garden.

I'm VERY familiar with that clip farflung - thanks for sharing it with everyone.

My friend spent A LOT of time on the strip back then and he educated me (much like you're doing now) on all the hot spots in the clip - including a detailed lesson on Pandoras Box.

Don't know if there are any Phil Dick enthusiasts here, but Crumb also did a short comic on him for Weirdo that I have great fondness for:

Very interesting. I just read that Crumb was on the staff of the underground newspaper the East Village Other with my favorite childhood comic artist, Vaughn Bode (he did Cheech Wizard in National Lampoon Magazine).

I was a strange kid. I read NL strictly for Cheech Wizard.

Patty just went to Crumb's official website. This artwork is a signed, numbered print that can be purchased for $750. It was drawn in 2009.

Originally drawn for the cover of San Francisco Comics in 1970, I've always loved the combination of front & back cover which can be seen here...

It somehow puts it all in perspective :-)

Oh so it was an original cover! The ones for sale must have been PRINTED in 2009. Thanks rice, the back cover is hilarious.