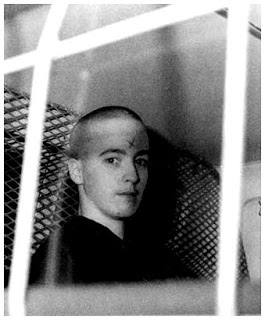 While cruising around the Internet superhighway, I came across a letter from Susan Atkins to Bill Nelson from 1992 where she had answered some questions that Bill had previously asked her in a letter. For those of you who do not know who the late Bill Nelson was, well, he was an author, and self-claimed researcher on EVERYTHING having to do with the Tate/LaBianca murders, etc., although in my opinion, he was more like a stalker than anything else. Anyway, I do apologize for not giving you the full letter. Frankly, it is too long & dragged out with her quotations from the Bible, and ramblings. As everyone recalls, Susan Atkins was a born-again Christian, and every other sentence in her correspondence had something to do with religion. Of course, to each their own in that aspect. I would never judge someone for their beliefs/disbeliefs. This letter is interesting in so many ways, but especially in the Bruce Davis kind of way. Hasn't Bruce Davis told the parole board over & over again that after he participated in Shorty Shea's murder, he was really disturbed, and went off to be by himself for a day or two? Well, according to the Sexy one, that isn't exactly what happened. He failed to mention that he was not only part of the execution squad, but also had a job as part of the clean up crew. This is the first time I have heard about this. I do remember reading that his finger prints were found on Shorty's foot locker, or something to that effect, but didn't know about the other parts. Of course, we all know it is hearsay now, but it still makes for an interesting read. Here is where the letter starts pertaining to her answers to the questions he had asked her in a previous letter:

I’m going to attempt to answer your questions, however, Bill, I really want you to hear me every time you probe me for answers that you think I may have tucked away in my brain from the past, it is VERY painful for me to go back to those awful times. Then I think, well, perhaps I may remember something that may help solve a murder, and isn’t it worth the pain to see if perhaps I may know something that could help someone so, per your request, I’ve probed and come up with the following:

Bill, all of the above is/was very hard for me. If I knew that I knew anything to help, I’d have volunteered information years ago, but I just don’t know anything, and the persistence in questions is extremely hard for me. Please thing about that the next time you get the urge to send me “old” photos, that perhaps would be better for me if I never were to see them. Paul wrote that “behold old things are passed away, behold all things are new.” I’m a new creature in Christ and I really do not like being put in the position by my “friends” to remember the past, the old things, the painful things. My beloved James, who loves me, NEVER even mentions my past to me.

I’m not sure why you felt it necessary to send me “never before seen” pictures of Sharon Tate, but, please, please do not do that to me again. Part of me wonders if you want to induce a reaction out of me, by sending me the pictures that you send me. See, it is YOU who are researching my past, and in so doing, you uncover things that God has already HEALED in my heart, buried and put in the SEA of forgetfulness, and then along comes my precious brother in Christ, wanting to show me what he’s uncovered and it’s like what has been healed is opened up again and it hurts, Bill, I don’t know how else to explain it. I deal with remorse every day I’m alive, don’t you realize that the pictures you send bring the reason why I’m in prison right back into my heart and mind and soul, and I grieve all over again? Is there no end, not even in the ? Am I to never be allowed to let the past rest?


The rest of the letter, and many more can be found at a wonderful site called "Truth on Tate/LaBianca" forum.This forum is two-thumbs up, in my opinion! Here is the link:
Susan Atkins letters to Bill Nelson

Getting rather sick of the Jesus-talk.

Sadie had a weird shaped head.

Lostwithsadie is gonna have a carnival with this one...

OMG! Adam, I can't believe you said that! I thought I was the only one who noticed Sadie's weird-shaped head. I always thought it was a pickle-shape.
Also, I guess most of the people who were in/around Manson at that time (The Family) are all floating on a boat in the "Sea Of Forgetfulness" because none of them seem to remember much.

Her sea of forgetfulness is her self protective mechanism. People do it all the time for much smaller offenses.

Many of them "just don't remember". I'm beginning to believe that. They were very young and the events were traumatic for them. It doesn't make them less culpable, unfortunately.

she DID mean Christian Scientist, NOT Scientologist. I think it's an English thing ... my Mom was one for a while ....

Hell no, they remember everything about it.

Even if they actually do have remorse, all the more reason to have those events in memory at the top of their brains.

I remember van houten in the Dianne sawyer interview in 1994. She was so obviously PRETENDING to have to stop and think while she remembered how many times she stabbed Rosemary.

Everybody's consciousness is subjective. When people say, "If she was really sorry then she would have _____" or "You can tell she's lying because she ________" they are projecting their own beliefs and feelings onto someone else. Reality is not the same for everyone. We form societies so there are enough norms for us all to get along as best we can but nothing is absolute when you are talking about human consciousness.

I know what you're saying but c'mon there's a trend here...

"I have found Christ...I don't remember...it's very hard to talk about."

As far as Van Houten goes, if you see the clip I'm talking about...it's obvious she's pretending to try and remember.

It doesn't mean she doesn't have remorse. Maybe she does. But she's stuck in a game where she has to act a certain way to sell herself for parole to those who have the power to grant it.

Even if she's parole material, she can't just show up, be herself, and say "This is me!"

She's still stuck between certain safe boundaries of how to behave, what to say, what not to say, etc.

It wasn't very smart of her that one time to refuse to show up unless (someone) wasn't there or (the media) wasn't there - I don't remember the specifics. She's the convicted murderer looking for release, and she's making demands? That's probably a big part of why she is now getting 5 year denials.

I would think also that someone with true remorse would know that the worst thing they could do is play hardball with the parole board. Again I don't remember the specifics but I know what I'm saying isn't too far from what happened.

I just remembered a classic moment in an early tex parole hearing.

Tex was putting on the act (the one I referred to earlier) and it blew up in his face. One of the board countered him and said something like "You claim to understand and be remorseful but you are sitting here talking like you're someone from another planet."

He was actually saying "Stop bullshitting Tex. Stop walking the line. Try being honest and telling us the real reasons behind your crimes. Not that we'd let you ought anyway but this shit is getting old and you're boring us to death here - no pun intended."

Hey, regarding the Studebaker, Manson told me that someone gave Ruth Anne Morehouse a Studebaker that was just restored.

I am sure that it didn't last long and was given away by Manson.

I'm really interested what that question-answer was in context to.

The Q&A was just typical random Nelson baiting and probing.

I agree, Max. I think most of them do remember. It was such a big part of their lives, I don't see how they could forget. I would of remembered witnessing murders, getting rid of evidence, etc. I also would of remembered living with a bunch of people, along with banging those same people! It is just something you seem to keep in the "vault."

What I think is weird about Sadie's response is this:

"Then I think, well, maybe I will remember something that could help solve a murder."

What the hell? That is an extremely, strong statement. If they were caught for TLB, then what murder was she referring to? People might of disregarded BN, because he was so annoying, but he did try to stir up these people. Her "Sea Of Forgetfulness" statement was nauseating, to say the least.

I wonder how much time Atkins was allotted to read and answer her mail. I bet she could have spent most of her day doing that. Spent time in group therapy? Therapy for what? Deprogramming and becoming a better person in prison? What a waste of taxpayer's money. She was very lost and damaged before and after.

Everybody's consciousness is subjective. When people say, "If she was really sorry then she would have _____" or "You can tell she's lying because she ________" they are projecting their own beliefs and feelings onto someone else. Reality is not the same for everyone. We form societies so there are enough norms for us all to get along as best we can but nothing is absolute when you are talking about human consciousness.
----------------------------
Very well said......

She isn't talking about Paul Crocket is she? Paul Watkins got along with him very well, but I never read anything about Bruce being friends with him.

Hi, I love Susan Atkins...always have since I first learned of her and I always will! I realize Bill Nelson would write to Susan and visit her....All of the information I have read that Bill Nelson wrote is all wrong about the murders and Susan! Love you Susan Always....Don't let all the Cold Hearted Bashers like Bill Nelson hurt you!

You love her? For what? You love that she brutally murdered a pregnant woman and her baby? You are sick and twisted.

My thought process on murderers finding Jesus is that it you are a true Christian and remorseful than you take your punishment. You should not be thinking of yourself you should be thinking of the pain it would cause the family members if you were released.Any peace you can give them is the very least you can do.