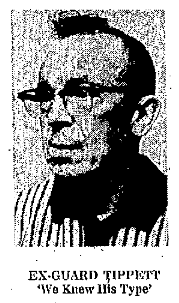 "He reminded me of an old car.... you knew things were going to keep going wrong with it, but you kept trying to repair it."

This was the impression that hippie cult leader Charles Manson left with most guards of the federal prison on Terminal Island and with one in particular Guard Henry Tippett of 2577 Jefferson St., Long Beach, now retired, watched over the self-styled Messiah during his almost three years in the prison.

Manson- apparently a Svengali even in prison, Tippett said- charmed the then associate warden, who made him a trustee.

"The officers who had contact with him didn't agree with the warden," said Tippett.  "We opposed making him a trustee.  If you work in prison long enough, you get to know these things, especially with this guy's background."

Tippett, who retired in 1959- a year after Manson was released- claimed Manson had a tendency to break the rules.

"He was always doing things wrong- anything to violate the rules.  It seemed intentional.  It wasn't because he was dumb," Tippett said.

"Fro example, a simple thing like being assigned to a dormitory.  Manson wouldn't stay in one dorm.  He'd switch around just to annoy the guards."

Tippett said the guards quit "writing him up" because Manson was never disciplined.

"He would have been in isolation all the time if the warden paid attention to the guards," Tippett added.

Tippett, who was previously at Leavenworth Prison, Kansas, claimed the even older inmates who associated with the then 22-year old Manson eventually ended up in "trouble."

"But he apparently charmed one of the associate wardens," said Tippett.  "The warden him on one job, then another- never doing anything."  Finally, say Tippett went before the classification board and became a trustee.

"I guess they felt they could make something out of him," he added, "but most of us - the ones who saw him in action- felt he wouldn't last long as a trustee."  Manson didn't.

Assigned to clean-up work at the adjacent Coast Guard base, Manson got into a locker room, outfitted himself in new clothing, picked up some car keys.

Ironically, he was caught at a roadblock near San Francisco shortly after his escape by police who weren't even looking for him.

Manson was returned to the prison, where he stayed until his release in 1958.

He had a few "followers" at that time, Tippett said.  "Most of the other inmates stayed away from him."  Not so today.

The bearded, long haired leader of the cult suspected of the Tate killings and "at least 10 others" has a following whose loyalty is hard to believe.

Held in the Inyo County jail for 10 days awaiting preliminary hearings on a charge of receiving stolen property, he "still runs his 'family' in jail,"  say the officers.

"'They' are the remnants of his gang in the desert area -- three men in a large cell with him, and one woman in a separate part of the jail.

"We find Manson a model prisoner though," added the officers.  "But he should be by now.  He has been in and out of jail since he was 15."

Manson was first arrested on an adult charge in 1951, in Beaver, Utah, for taking a stolen car across a state line (a federal offense).  He was sent to National Training School for Boys in Washington D.C., then transferred to the federal reformatory at Petersburg, Pa.

In 1955 he was arrested for auto theft in Los Angeles and given a five years' probation; he violated his federal probation a year later in Indianapolis and was sent to the Terminal Island prison.

When released in 1958, he was picked up for a vehicle code violation in Los Angeles.  The following year he was arrested for auto theft, and later in the year for forgery.  In 1960 he was arrested in Laredo, Tex., for transporting women across a state line for immoral purposes (another federal offense).

In 1967 he was arrested in Ukiah for interfering with an officer; in 1968 in Ventura for having a false driver's license.

At his preliminary hearing Wednesday, some of his followers were in the audience lending him moral support; others in jail spoke out in his defense.

Some of his followers have even said they would kill for him -- and they allegedly did.

"His followers." Patty is pretty sure that not all those people thought Charlie was JC. Or maybe Ms. Neiswender is using the term more loosely, as in those who "follow" the Grateful Dead. Even today People ask Patty if she is a "Manson follower" which makes her shudder. No, she just follows the story of Manson, not the man himself. Charlie killed the sixties, you follow?

If Sharon hadnt've been there the crimes wouldn't have been so high profile and we wouldn't be here today discussing it.

Manson wouldn't have had the platform to become so famous if the door hadn't been already opened by the "Pregnant Movie Star and 3 others Killed" headlines that dominated the news from August 9th on.

We never should've learned who that guy was unless we were directly involved in the case.

Could we even imagine how a this story would have dominated the headlines if it happened today with our 24-hour news cycle? It would be unreal!

Vietnam War killed the 60s and nothing else.

That lead quote might be the best quote EVER in this case... I shoulda named my last car "Charlie".
Wow, Matt, so true. There would be no mythologization (is that a word?... My rule of thumb is that if I can use it in a sentence, WTF, it's a word... May have overreached with that one, though) of Manson, NO secrets, & can you imagine if there had been thorough blood typing and spatter, etc. analysis done? I have always wanted, more than anything in this case, for a forensic blood pattern expert to look at this case. But because Granado (maybe understandably) failed to type and sub-type so many areas, it might not be possible anyway.

@non, you are right. Patty will concede that Viet Nam was a much bigger buzzkill than Charlie could ever be. Altamont kinda sucked too. Not that Patty was there because she wasn't so this is all conjecture.

PS Patty is hearing some rumblings that Mr Manson may be featured again by Rolling Stone this year.

Interesting direction they've been going, no? You can only take so much Miley Cyrus and Black Eyed Peas before you need some Healter Skelter...

Vietnam was already happening in the '60s.

The '60s movement was effectively killed by this case.

The message was "all them damn long haired wierdos are gonna sneak in your house at night and chop you into little pieces."

I've known some people who lived through the '60s and STILL have a major hard on for Manson - they blame him for the end of it all.

Got to agree with you on point #2, Max. On point #3, I'm not so sure. While the murders and Altamont certainly put the '60s in a bad light, there was plenty of the culture around until approximately the time the war ended. I think the lack of a war and a draft to protest were more responsible for the end of the '60's than anything else.

It certainly all worked in tandem to bring an end.

It's really about what angle you're looking at it from.

The Manson case was indeed hijacked by "judicial gangsters" (Hendrickson's words) and exploited to cast a very dark cloud over the hippie types and their culture.

I agree with Max, Sharon Tate's celebrity status made this case stand out far above other heinous murders in the same general time period.

Show of hands. How many of you have ever heard of the McCrary Family? They kidnapped, raped, robbed and murdered close to two dozen across the US including California in 1971 and 1972. They were convicted of 12 murders and other assorted charges. Their victims were mainly donut shop clerks.

The sixties committed suicide. Just follow the rise and fall of the haight ashbury scene...anyone remember "death of hippie, son of media" as celebrated by the Emmett Grogan and the Diggers? That was late 1966 I believe. Basically, a bunch of zonked out kids wearing flowers in their hair out for a good time with no skills to sustain themselves showing up en masse in a declining blue collar neighborhood doth not a permanent movement make.

A successful movement also needs a coherent intellectual and spiritual underpinning to be successful. "Free Love"? "Tune in, Turn on, Drop out"? "Dont trust anyone over 30"? Pretty light stuff.

Drugs, crime, and selfish and irresponsible behavior did in the sixties. The sixties needed Vietnam to protest against in order to keep the dream that all of this had some deeper meaning alive. When the Vietnam war wound down, the sixties dream lost its aura of moral righteousness.

Dont get me wrong though, it was a heck of a good party for a while.

Part of that was simple demographics. The baby boom ensured a massive concentration of young people, who can afford to screw around for a few years before they have to get serious.

Their sheer numbers lend their activities an air of significance we might otherwise not grant them.

There was more to the movement than protesting Vietnam. It was protesting the machine. Things were out if hand then (more so now) and there WAS a coherent message coming from many at the time.

It wasn't all about the tune in turn on drop out crowd. There was definitely a meaningful and desperately needed revolution in its infant stages.

People need to wake up, rise up, and do it again - but this time follow through with it.

The difference between now and then is that young people outnumbered old people then. And they were a lot smarter than young people today - much more grounded.

Young people today are too caught up in video games to even know what the word REVOLUTION means or how necessary it is now more than ever.

Deb, check this story out and tell me what you think. I have been obsessing on it lately. I need your big investigator brain.

The young people of today are also kicking Patty's ass in Biology and Chemistry. Scrubs are the new status symbol the way a suit and tie used to be. Brave New World, babee

Wow Heidi that's heck of a story. I question why the boyfriend, Chuck, was not found. Makes me think of both Scott and Drew Peterson with a bit of John List thrown in. I'll see what else I can find to try to get a well rounded picture of the situation. Thanks for bringing it to my attention. Feel free to email me anytime.

Blipcrotch, I agree with a lot of what you say. I lived in the SF Bay Area in the 60s. I remember a lot racism, riots, and not a lot of peace and love except on TV shows and commercials, but then again, I lived in Oakland.
I didn't make it to Altamont, I was too young but my buddy's older sister went and she didn't witness any of the fights between the audience and Hells Angels. The reason, she theorizes, is that she was very far from the stage.
I did witness a riot in Berkeley and fight between a guy with a machete and guy with a crutch in the Haight.
Weird times...... What long strange trip it's been.......