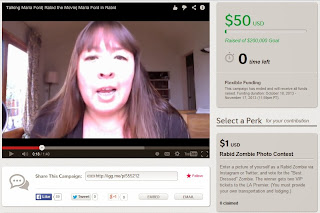 Complaint:
Susanna Lo sold walk-on roles in a movie called "Manson Girls". She sold them for 2,000 each in an Ebay auction in January of 2012. The financing for the film fell apart nearly two years ago and the movie is never going to be made but she refuses to refund the money. She is a shady person and a pathological liar.  Please do not get involved with her or invest money in her imaginary film projects.

Rebuttal:
Susanna Lo, Slomotion Studios LLC (as opposed to "SLOMO" listed in this false claim), and anyone connected to Manson Girls the film, never sold walk-on roles for any of the projectss they are connected to. Jeff Kane, the creator of this false claim, has been blocked and flagged by Facebook, IMDB, Wikipedia and all members of the Slomotion Studios LLC team for breaking into our various websites and attempting to alter the facts on the sites, along with posting defamatory comments not acceptable by these sites. A libel suit is currently being filed against him.

Rebuttal to Rebuttal:
That's not true.  I haven't been banned from any of those sites. I have a receipt from an ebay purchase that proves Susanna Lo charged me $1,995 for a walk on role in Manson Girls even though this film is never going to be made. She recently tried to raise money on Indiegogo for a film called Rabid.  She wanted 200,000 but only managed to raise 50 dollars. She not only scams people out of money but then she has the nerve to lie about them and threaten to sue them for defamation. How is it defamation if I can prove you scammed me out my money?  I welcome a lawsuit. You barely have enough money to feed and clothe yourself, how could you possibly afford a lawyer?

Oh, dear. This is getting messy, isn't it?

You can view a video of Susanna Lo surrounded by opulence and wealth while discussing her new project here. At this site you can also get a walk on role in "Rabid" for the deeply discounted price of $150. $2,000 will now buy you a producer credit. What a STEAL!

She still claims that The Doobies are working with her on a soundtrack.

Tell ya what, Susanna. You give Jeff his money back, you send Liz the T shirt you promised her, and then we let it go. Deal?

"Susanna Lo the author is a Lesbian, which is great, but the man hating kind, which is not so great."

Good Day Susanna,
Your script and writing sucks.
Oops, was that a libel slanderous statement?
Sorry, well not really.

Hi Suze! Patty's never met SLo, so who knows about her being in the she woman man hatin' club. But Patty is pretty sure that she did take Jeff's money, and that means she made money on the Manson story, which is bad karma, no? Patty actually wanted to see her man hatin' movie, and wished that this whole deal had turned out differently.

She couldn't afford the Doobies, instead she can hire the Boobies.

Thanks for posting this. She can't just let it go at scamming me out of my money. She has to accuse me of hacking her websites.

Hal Hartley is doing a kickstarter for his new film, and for 2,000 you get a lunch date with Parker Posey. That would be totally awesome. He actually gets his films made and has talent though.

He's the opposite of Susanna Lo.

shadow, sorry this happened to you. For us 99-percenters that's a real blow to the pocketbook. Hopefully word will get around and this won't happen to anyone else.

Patty, I was just regurgitating what ColScott said in a post. Personally, if she ever does make a film I won't see it unless shadow reports back that he had his money returned.

I realize most folks in the US don't give a hoot about the 2nd largest JAIL in America or that it was run by a GANG of vicious Sheriffs Deputies (just busted by the FBI) BUT the revelance to the Manson Family, back in 1969, is NOT just coincidence. Just the other day, 18 Sheriff's were arrested, including a supervisor. The "officers" not only beat prisoners, BUT "visitors."

In "Death to Pigs" I revealed that Sheriff's Deputies "killed" and dumped the bodies along freeways back in the sixties and apparently the officers violent conduct went totally unchecked -- to the extent-- a GANG has been running the JAIL ever since. They even kidnapped the FBI informat who reported on the GANG'S criminal activities.

PS: It was the Sheriff's Department that busted the Manson Family at the Spahn Ranch AFTER the Tate massacre. Back then they were watching the Manson Family AND even had dealings with the Mansons. ALSO: YOU will NEVER know what the Watson tapes reveal.

Robert, Patty absolutely agrees with you about the Tex tapes. Thereshere's something sneaky going on in Sneakyville.

She is also starting to believe you about "Kevin."

I thought the movie was already filmed. Maybe she only made a "preview" to drum up interest.