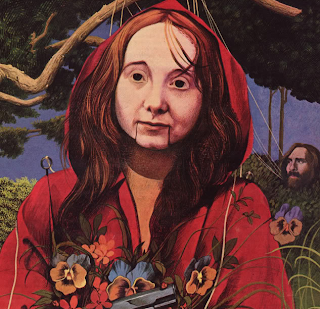 Hello there, dear readers! Are you ready to read Lynette Fromme's juicy account of her "first time" with Charles Manson? Personally, it nauseated me the first time I read this, but, as I always say "to each their own!"

Without further ado, I bring you Lynette "Squeaky" Fromme's explicit account of her first sexual encounter with the man (Manson) she described as looking (the first time she saw him) unkempt & elf-like with a two-day beard, and body odor (yummy):

His hands covered her body, touching every inch, smoothing and massaging until her fear drained away. Like spiders, his fingers climbed, and crawled into each fold, and crevice of her body. He slid down between her legs, and licked, and kissed, finding his way to an undiscovered part of her anatomy, "a tiny, hard supersensitive  thing," she marveled, a part she didn't even know that she had. She knew it was supposed to be wrong. No man ever had gone down on her before, and she never would have dared suggest it. But she always had wondered what it would feel like. Now she knew. She felt, she wrote, like a "princess wrapped in velvet." Now, he was atop her. She looked up at him, at his broad, content smile, and his closed, dreamy eyes. She thought she was evaporating, and that Charlie had filled himself where she had been. It felt good, she thought, so good, too good-too good, and she convulsed in fear. He paused, sensing her dread. "Allow yourself to experience pleasure, Lyn," Charlie counseled. "Allow yourself to let go. To give up. To give up, and love."She gave up.

Apparently, the second time they were intimate, Manson "invited" Mary Brunner in to "watch." Squeaky wrote that she was doing it with Manson, and felt uncomfortable, because Mary was sitting there watching with dreamy, blue eyes and a wide smile. Mary then moaned "It's beautiful!" KINKY!!!

Excerpt from Squeaky: The Life and Times of Lynette Alice Fromme by Jess Bravin

I've read "Squeaky". It seems like I'd remember the exerpt. Maybe I'm getting old.

Yeah, I didn't remember it being in there either, but, alas, there it was.

From what Patty has read, Mother Mary had a real hard time at first with sharing her man. But she wanted to make Charlie happy, so she got used to the other girls right quick. Maybe that big ole smile on her face was her initial shocked reaction to Charlie's brand of aversion therapy. Either way...yuck.

Yeah AustinAnn, yummy. Just goes to prove you don't have to be Brad Pitt to get some. Reminds me of this creepy little guy who was my college boyfriend's dorm mate. Ugly SOB but he had no fear of trying. He went through a lot of girls. He'd just laugh & say it's a numbers game.

Didn't think that was so "nauseating".
"My love for you allows me to pray to the spirit of eternal beauty and tenderness mirrored in your eyes" -James Joyce. Just read the rest of his letters to Nora. Nauseating.

Charlie gave some similar discriptions in Nuel Emmons book. According to Charlie, Charlie is very good at that kind of thing.

The similarities between JFK and Manson are SO bizarre, especially because JFK came FIRST. ALSO, it was the "commenting" about Squeaky that made me tweek on such a strange coincidence. It was Phillip's comment that really made me "look at another side."

I also realize that "leaders" need a WAR to really FEEL their POWER. You can actually go down the list. Even Nelson Mandela needed a "revolution."

PS The Squeaky "love making description" may have originally come from "The Book of the Dead."

Yes, the artwork is really eye catching. Ann, who is the artist, do you know?

I have no idea about artist. I found that pic when doing a search on Squeaky photos on Bing. It is creepy.