Recently, Patty told Brian Davis the story about how she found a scorpion in her house last July 3rd. As she was doing so, she realized that she has never told the story to all of you. Want to hear it? This is absolutely NOT made up.

This past fourth of July, Patty posted on facebook: "Is there any folklore that you are aware of surrounding a scorpion in the house? We had an unexpected and bizarre visitor last night." Her knowledgeable and thoughtful friends had much to offer. One mentioned that symbolically, a scorpion means self-protection, or a need for protection. In Ancient Egyptian legend, a scorpion brings good luck and wealth in the very near future. Native American lore imparts many meanings to the scorpion: it may represent metamorphosis and openness to change. Endurance, tenacity, determination and willpower is another theme that is related to independence, self-possession, fearlessness, forcefulness and intensity. And of course, the scorpion is one of Manson's favored symbols.

He or she was tiny: maybe an inch and a half long. Patty never did get a photo of it because when she went to catch it in a canning jar, she squashed his right pincer. At that point, he was no longer portrait worthy. Patty immediately googled scorpions, and discovered that unless you have a bad allergy, you won't die from a scorpion bite. It will only itch like hell! The sting is far, far worse than a bumblebee, Patty is told. 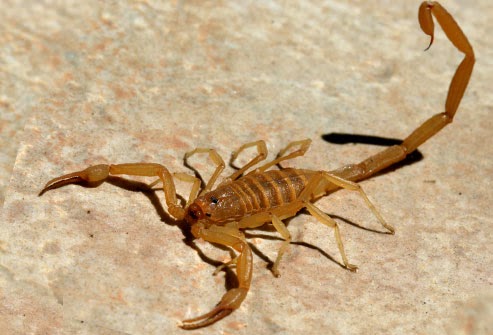 Around the same time, Patty had been communicating with a friend of Manson's whom she had just been introduced to. Patty wrote to him that "you may be surprised to hear (or maybe you won't be) that Patty had a scorpion in her kitchen last night." Manson's friend replied that no, he was not surprised, because these things often happen in his circle. Furthermore, he stated that back in the day, these types of occurrences would scare the crap out of him. Now, he just sits back and enjoys the wonder and the mystery of it all. He said that among Charlie's friends, they call this kind of ooEEoo "myme."

Last September 28, DebS wrote the following to Patty: "There was a scorpion in my laundry tub this morning! I have no idea how it could have gotten there. The laundry room is on the second floor. There is a door out to the deck as well as one into the house in the room but the screen door is always shut. I've seen only one scorpion in the nine years I've lived here and that was outside, where it belongs!"

Patty has wondered ever since then if the two scorpions found 100 miles and three months apart are related incidents. Neither Patty nor Deb had seen a scorpion in years, and they are both long time California residents. Were they put there on purpose? What do you think?

No ooo-E-ooo there, Patty. Scopions used to get in our bed and sting Mrs. Whut. That's just the way they are.

Every "happening" "event" no matter how insignificant, lies behind a plausible explantion. That WE do not SEE as mother nature SEEs only means WE can NOT SEE! And WE cannot SEE because WE are constantly "distracted." Take ALL the "distraction" away and a whole new world opens up. Gypsy's "new" world became TOO intense, even for her, and she chose to return to her old "distracted" existence.

Patty has obviously experienced a "OH, I am beginning to SEE" moment, which can even be thrilling. BUT NO "distraction" can be totally disarming, dangerous AND the ride of a lifetime.

IF you find a Charlie in your closet, it's time to call........Mr. B and his Ghost Busters

The unusual sightings may have something to do with the weird weather in California this past year. But, it makes it easy to see how the ancients and some modern cultures put so much thought into what things "mean." Like, in Egypt during the time of Moses. There was an eclipse, and an overbloom of red algae, and a hell of a bumper crop of grasshoppers. Of course, God must be pissed! And who is to say that they were wrong? ;)

I was going to ask if there is any significance of finding a cockroach but I think I know the answer ;-)

I've lived in both southern and northern CA for 30 years and never saw a scorpion here. I was in Texas for several weeks and not only saw a scorpion but a tarantula as well!

Paths cross with many things though life and whether there's a purpose or reason is up to us to decide I guess.

YES patty, BUT to an Albino the Sun is a curse, and a flood to a shipbuilder is a blessing.

SO exactly what is "Weird"

PS: the last scorpion Patty saw before this incident was the one that crashed Jennifer Howatt's hot tub during her 12th birthday party 30 years ago.

In college in southern Arizona one of the first things I learned was to bang your shoes against the floor before putting them on. Scorpions like shoes.

They get into the house mostly through shower drains left uncovered.

I also vote weather. I have a friend that found one on the ceiling in Temecula, CA recently. I live in AZ and see them about every other year. But in that Manson is a Scorpio, I would say synchronicity.

I also vote weather. I have a friend that found one on the ceiling in Temecula, CA recently. I live in AZ and see them about every other year. But in that Manson is a Scorpio, I would say synchronicity.

I can definitely understand being freaked out finding a scorpion in one's house being a T,L scholar Ms Patty if You ever find one made out of Charlie's underwear then you might wanna keep a loaded 44 next to your nightstand like I do in Jersey
Hopefully your stalker has atleast moved on Ms Patty

I really think it can mean something.

I mean, I think I've been through something similar some months ago;
I really like some of Charlie's music. But every time I listened "ATWAR"(1984) a BIG and very poisonous black/red spider appeared. It just freaked me out, so I had to stop listening Manson's music for a while.

BTW I love the blog!

Thank you, aa11ct9 and welcome to the blog.

word! And thank you William. Since the scorpion was NOT made of Charlie's underwear, Patty keeps a can of Raid by the bed instead of her twelve gauge. ;)

Nice to know Patty support's the 2nd Amendment hope your stalker read that you have a 12 gauge with their name on it if they ever thought of attempting a Creepy Crawl.

Patty probably wont shoot anybody, she will just squish any unannounced visitors with a canning jar. ;)

That is the "MyMe" factor. You should feel blessed to have that. There are very few people in CM's inner circle that even get to experience it.

I was leaving my summer home last week, sitting the porch with my wife talking about CM. It told her how upset I was about him being in the SHU again, and no sooner then the words came out of my mouth we looked right above our head in a tree, and there was a 3 foot talk Eagle just sitting there watching us. We photoed it, walked around it, and it did not move. As soon as one of my children walked out the door he flew off. I experience these "MyMe" moments daily. Truly unbelievable unless you experience it!

Thats what some have told Patty, Ben. Perhaps some people are just more open to this sort of message? Patty doesnt know if it was actually a message, but she cant say that it wasnt. And that's where the ooEEoo comes into play.