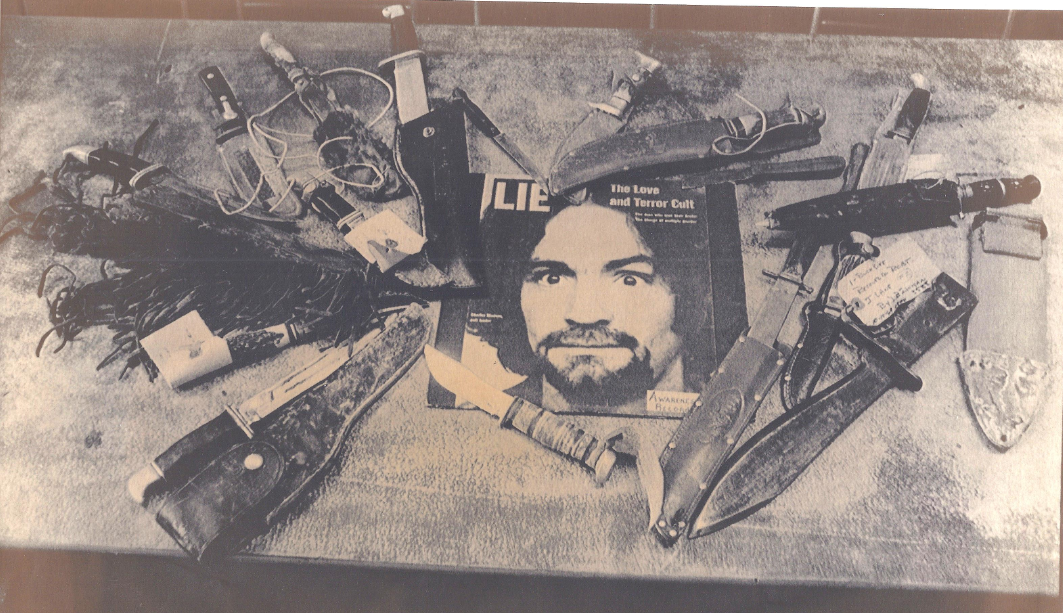 I got a new press photo that I'd never seen before!  This apparently ran in newspapers in 1984, the back is stamped "Received Examiner Reference Library Feb 20 1985"  The caption-

"(LA 11-AUG.9) -- Manson Family Knives-- This is a photo of the various knives, and a record album of Charles Manson's songs, that were seized in a 1969 police raid on the Barker Ranch in Death Valley.  The album was sold by Family members, Lynette Fromme and Sandy Good Pugh on the streets of Independence, Calif. while Manson was in the Inyo county Jail.  (AP Laserphoto) (pjh41400mbr) 1984     SLUG: MANSON ANNIVERSARY

Great find, Deb. I've never seen the picture before either.

Does anyone know whether it was this type of sheath knives that the girls wore on the street corner during the trial or did they wear folding Bucks?

Interesting photo Deb, thanks for sharing. I'm wondering who allowed this to be photographed. Regardless if it was Inyo or LA County, this photo will be extremely helpful to me. I'm guessing the caption is a bit off though. The knives maybe from Barker, but I think it's LA County who was allowing the photo because the album wasn't out until sometime around March and Inyo was long done with Charlie by then.

I wonder if these were the same type of knives that plunged atrociously into the legs of Wojciech Frykowski , Abigail Folger's face, and Rosemary LaBianca's back? Those knives, I know aren't the actual weapons, but they represent, IMO pure evil.