WHAT IS THIS and WHY IS IT SO IMPORTANT? 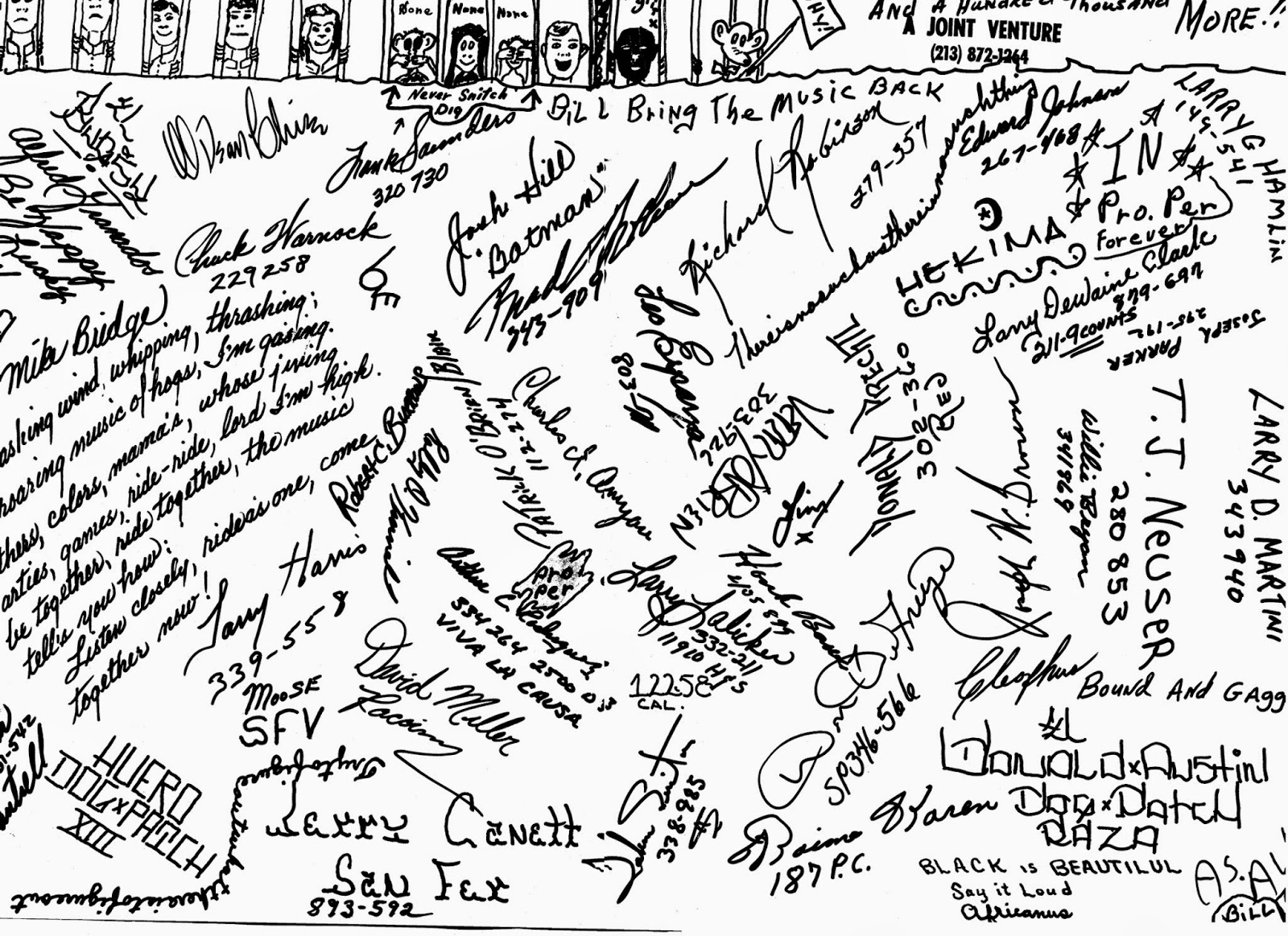 Is that part of the insert in the LIE album?

It's been so long since I've seen one. I sold all my LPs years ago.

Well, I should have guessed Max would recognize where it's from, BUT what is all about and why is it so important?

Note: This insert was included with the first few LIE albums sold by the Manson Girls. A few Hundred were printed, but were later all destroyed by water damage.

Deb, it's going to be a tough one, BUT you are on the right path.

Ok so it's jail-related, was an insert in the LIE album and contains criminal charge codes. Could it be some sort of jail greeting card sent to Manson?

With Max's helpful clue I found that this is was signed by LA County jail inmates who supported Manson. I see some obvious Hispanic names, is it possible that some of the other names were Black prisoners who in spite of the prosecution's "Helter Skelter", race war strategy supported Manson?

I did see what is probably Manson's own contribution, "IN Pro Per forever" surrounded by stars.

Donald DeFreeze Cinque from the SLA

You're on the right road, and the path may be long, BUT OH what a pot of gold at the end of the rainbow.

I'll be damned. Donald DeFreeze IS on there.

That is rather significant!

You also have Satans Slaves Moose from SFV whose charter later patched over to the Hells Angels. Sorry but clueless what is at the end of the rainbow however.

"Over the rainbow" is a programming code for some of the modern mind programming.

"A Joint Venture" which appears on this album insert was also listed on Manson's Union 76 Credit Card application. Was that Phil Kaufman's business? Address listed as being on Chandler Blvd.

The common thread between ALL who signed the poster, including Manson, is that they all are acting as their own attorneys (ProPer)

I just re-read Taking Aim at the President, a book about Sara Jane Moore. DeFreeze is mentioned in it. Has anybody else read it?

GUESS Who is Charles "anyou" and "Bill" ?

In reality Bill, the SLA isn't connected to the Manson Family. However to me I find it highly Ironic that DeFreeze and Manson were incarcerated in the same facility at the same time. History is filled with Irony.

Thanks for the links Patty. It tied up at least one of those loose ends floating around in my brain lol!

Hey, Mr Hendrickson! Can I get a reply as to how I can get the movies sent to Hong Kong now? Really do want a nice DVD copy instead of fuzzy old downloads.

The "Dog Patch" reference may be to the Mexican area in Paramount,CA. Residents of that area often wrote it's name on walls in that same type of printing in the mid to late 1960s.