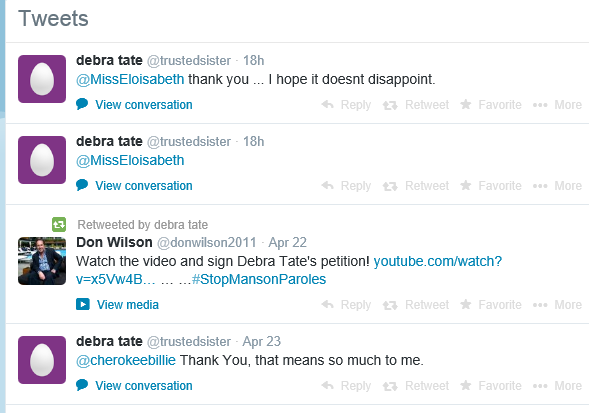 We know most of you are getting bored with this blogs' posts which you feel we present Debra in a negative light but we do want follow up on the last post about Debra.  Since the post ran, Don Wilson's online presence has diminished.  As of this writing he no longer has a Facebook page, a Twitter page, a Pinterest page or a Tumbler page and his LinkedIn page has been revised, too.  Don Wilson is a convicted sex offender, he is posted as such on the State of California Megan's Law website.  His criminal record is available through the LA County Superior Court website.  This is not a case of blog or forum rumors and gossip, it is a fact.

We have an intense dislike for people that harm children physically, sexually or mentally.  We hope that there is a special place in hell for these people.

Debra demonstrated poor judgment by allowing Wilson to speak on her behalf.  She did not exercise due diligence in vetting those that represent her.  If I were a victim's family member I would not want Debra to speak for me. Our opinion is that Debra should back off from calling herself a victims' advocate and focus on keeping the people that were responsible for her sister's murder in prison.  Keep it simple and on point.  Debra has not been an effective victims' advocate, Bruce has been granted parole at his last three hearing in spite of her presence at the last two hearings.

Debra appears to have rectified the situation and has severed any online connection to Don Wilson as far as we can see.  While this should have never happened in the first place we are glad to see that she has the good sense to take action regarding this matter.

The question you can as readers ask yourself as you think about this is, what else was Don Wilson gaining by latching onto what was once a valiant campaign/cause? Was he using it to meet new unsuspecting victims who trust the name Tate and thereby (now) Wilson, to be protected by predators such as himself. Was he ever able to lure an unsuspecting parent to trust him with their child? We'll never know, but I gotta say, I will sleep better knowing that we did whatever we could to expose and shut this guy down and to let him know, we're still watching - so don't fuck up, Don. 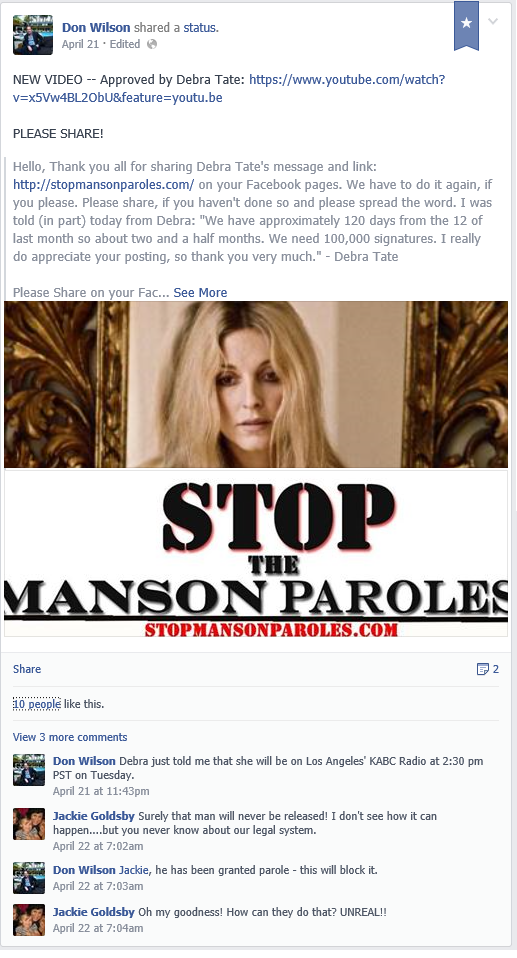 "Debra appears to have rectified the situation and has severed any online connection to Don Wilson as far as we can see."

If this is true, then she certainly deserves "KUDOS" for that decision.

Yes, what you say is correct Chats. We wanted to let people know she has done something about it.

Regarding the first paragraph of your post - maybe some people are getting bored of the DT posts, but I can assure that there are many of us who are not. Kudos to you and the rest of the gang for researching this stuff and bringing it to us here. The stuff you post is honest, and your protective approach to children and their welfare is heartening.

BTW - Many of us have got DT and Barbara Hoyt act as 'victims' advocates' well weighed up. Their fifteen minutes of fame were up long ago.

I'm not so sure Debra made a choice to do the right thing. I think she made the "Oh shit, I'm busted" choice.

Thanks for the info, Matt.

the thing is that DT may have severed any online connection to Don Wilson, but that does not mean to say that she has severed her connection completely. Therefore, she may still be using him in her 'victims' advocate' organisation. We don't know.

I have to tell you that I saw the photographs that DT posed for in 'Oui' magazine back in the early 1980's, and she really should just keep her head down and her mouth shut. Those photos were disgusting, and on that basis, she is in no position to judge others.

Equinox, the only tangible change we can see is what you said, she severed online connections to Wilson. That could mean that she has done the right thing and cut him off completely.

Personally I lean DG's way, but we leave it to you, the readers, to make up your own minds.

As far as Oui is concerned, I don't judge her for posing. She was young & may have needed the money. Thing is (in my opinion) she was attractive but definitely not Oui material. That leads me to suspect she wanted to cash in on her slain sisters notoriety. Is that what still motivates her, or is she a victims advocate who happens to have two child molesters as friends? Once again, the readers can make up their own minds.

It is definitely a case of being busted again. She is very close with this person. She is obviously NOT pro victim in a universal sense

Col, she's not "universally pro-victim" B-B-buttwhahh?
Okay you don't claim a right to make stuff up and generally media whore around, but as far as I know you haven't walked half a mile in her postal issued shoes and I really think this is witch-hunting and am beginning to wonder which witch is which!

Is that the pre-shaped Shape of Things To Come, head Trooper?

Deleted from the Internet but Leslie's attorney and I still have everything. After the original post I did some digging and screen capped everything damning.

Well done to you! Best of luck to both you and Leslie's attorney in your endeavours.

Col Scott,
Nice to see input from you. You are so right about 'not in a universal sense'.

Does anyone know if DT and BH have ever turned up at Charlie's parole hearings?

"Ain't NOONE ever been to any of my parole hearings!"

The reason DT and BH do not appear at your parole hearings is that they know that you are an innocent man, wrongly incarcerated. It is not your fault that everywhere you went, dead bodies turned up.

I remember some interviewer interviewing Manson asking how he felt about Doris Tate showing up at his parole hearings. He corrected the interviewer and said "She's never been to any of my parole hearings because she knows I didn't have anything to do with killing her daughter."

Max, didn't Doris once say they should be called "The Tex Watson Murders" or something to that effect?

Bottom line is she has made a number of statements over the years implying that Tex was more to blame than Manson.

I hate how people always bring up DT and BH's weight HOWEVER her defense of Roman Polanski tells me DT is in fact not entirely anti-child rapist.

According to Helter Skelter, Doris Tate attended most of Manson's parole hearings.

There's no need for anyone to attend any of his hearings, because he has never tried to get released.

Gee, is anyone surprised that Bugliosi lied in his book Helter Skelter?

Leslie, Bugliosi wrote that Doris attended most of the parole hearings for Manson and the others. I guess that's kind of an ambiguous sentence. This was from the 25th anniversary edition of Helter Skelter.

In all fairness Matt, you can be placed on the sex offenders register for 'crimes' that are not crimes. There are children as young as 8 placed on it for 'playing doctor' with the little girl down the street. One stepmother brought in her 10 year old stepson because, in curiosity, he had looked beneath his stepsister's nighty. People have been put on it for public urination. And if you committed a 'crime' when you were a child, with a kid of your own age, the register doesnt reflect that. It simply puts your age now, so it may say Mr X aged 40 and girl of 7, without you ever realizing Mr X was also 7 at the time.
Couple years ago, a young lad of about 16 at a homecoming football game, drunk, decided to do a streak. Everyone laughed and he was the hero of the day. Until the evening, when there was his principal on TV saying how grave it was, how a child had been traumatised by the sight of a nude human and how the boy would be placed on the Register. Whent he boy found out this meant he would be persecuted for life (example, when you move house, you have to send a postcard informing everyone in a 1.4 mile radius of your status, carry a card with SEX OFFENDER in bright red letters, register every six months and pay thousands for doing so, if you cant pay you are jailed...people have literally experimented as kids, been caught by parents and had their lives totalled). he hanged himself.

I dont know what this guy Don did, but dont leap to conclusions. This could happen to anyone. Dont be tempted to take a piss against a tree on the way home.