Blog reader John Tottenham has an exhibit opening today at: 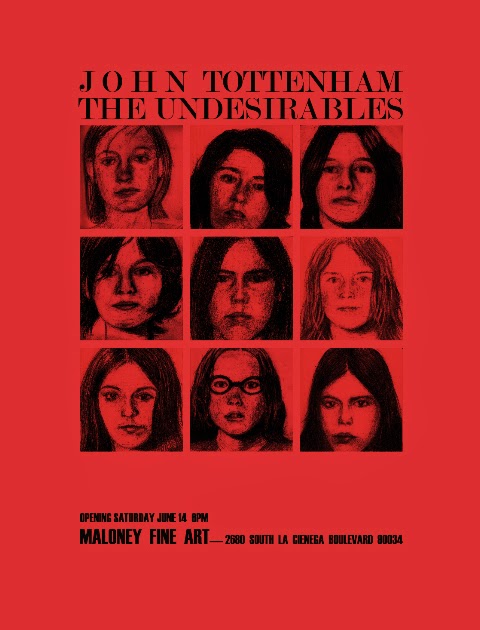 On the subject of "The Undesirables" John writes:

"I encountered the Manson story as an impressionable 15-year-old who had recently been kicked out of one the least notable public schools in the south of England. I was sent to a school for difficult kids but spent most of my days walking the streets of London. I found a copy of  'The Family,' Ed Sanders' colorful account of the Manson murders, and I went round and round on the Circle Line in London, unable to put it down. The atmosphere it evoked, thick with sex and dread, was  intoxicating to a morbidly romantic youth whose voice still hadn't broken. In the evening, after a day of truancy, I returned to the family home in a quaint Kentish village - 35 miles from London but deep in the heart of the country, and very remote insofar as public transport was concerned - where I would read it while listening repeatedly to 'Forever Changes' by Love. Fortuitously enough, I discovered this record at precisely the same time, and it served as the perfect soundtrack, evoking an eerie, damaged, distinctively Los Angeles atmosphere. Arthur Lee's cryptic, riddling lyrics - 'Sitting on a hillside, watching all the people die,' etc, are not dissimilar to Manson's  "No sense makes sense" logic: "Look down at me and you see a fool, look up at me and you see a God, look straight at me and you see yourself," etc. The Manson case offered an exotic and extreme form of vicarious  teenage rebellion, being the complete antithesis of my staid rural colonial upbringing.

After gazing upon the grainy full page shot of Susan Atkins (AKA Sadie Mae Glutz)  in 'Helter Skelter' I became hopelessly besotted. I would stare at that photograph for minutes on end, completely losing myself in it. Her expression was very haunting, very penetrating. What most drew me to the Manson story was the  predicament of the girls. They seemed, in a way, like victims themselves, and they hadn't been much older than I was when they had fallen under Charlie's spell.

I projected most of my adolescent romantic longing onto them, though there was a lot to go around. I wrote a billet-doux to Susan Atkins and sent it to her care of the Frontera Women's Institute. A few weeks later my mother, understandably perplexed, handed over an envelope with a California prison stamp upon it and a complicated series of numbers denoting the sender. Susan had written back, informing me that she had seen the light and recommended I do likewise. After the epistolary letdown I began to feel guilty about my Manson-immersion. I built a ceremonial bonfire and burned the Atkins letter, along with other artifacts, including an original copy of the Manson 's 2019 record on ESP that I had found so affecting, especially 'Look at your Game Girl,' which perfectly evoked the eerie sun-dried lostness of those times.

When I started digging into the case again, I realized that the photograph of Sadie in 'Helter Skelter' was rather a flattering one. She certainly wasn't doing herself any favors when she started showing up in court with a shaved head and unshaven legs: that was a look I couldn't get behind. In hindsight, the Sadie infatuation probably had an unhealthy effect upon the kind of women I subsequently gravitated towards.

My interest in the case had faded by the time I made it out to LA. By then it had become off-puttingly trendy in transgressive circles. But it has turned out to be a constantly revisited fascination. And obviously I'm not alone in it. I frequently  meet people whose early impressions of Southern California were formed by the Manson case. Murder stories often serve as a portal to another time and place. In this case, it served as a window into the Los Angeles of the late 60s, obviously a very interesting time, especially as the idealism and hedonism began to sour. Here was a unique confluence of circumstances - a crucible of chaos in which a bizarrely charismatic ex-con with a messianic complex attracted just the right group of vulnerable and manipulable young men and women on just the right/wrong combination of potent drugs in a climate that facilitated a horrific and previously unthinkable chain of events.

My intention with the drawings was to capture as precisely as possible my most intimate impressions of nature. In this case, feminine nature. I was never interested in the murders as much as the shadows they cast and by the girls who dwelled in those shadows. And what became of them. The drawings are of all the girls in the Family, not just the killers; in fact, some of the killers are under-represented. I used almost every suitable image I could find. There has always been something haunting about a mugshot, especially old ones, and these mugshots are about 45-years-old now.

They started out, as everything seems to, as doodles on post-it notes, and they evolved on to slightly larger pieces of finer paper. Though tiny, some of them took a long time to complete. I wouldn't be satisfied until I felt that I'd captured something, if not an exact rendering of the photograph, then something that evoked.

The drawings are a personal exercise in nostalgia. When I think of the Manson saga I don't think so much of where it took place - and where I ended up - but rather of where I was when first exposed to it; the canyons and deserts of Southern California come sweeping back to me as I first imagined them, borne on the cold autumn wind through the English countryside, while I sat on the sofa in the living room of a modest country house with 'Forever Changes' repeatedly playing on the stereo. I know it's all played out now but it wasn't when I first came across it. It's my attempt to capture what I found so haunting when I first became obsessed with the case.

Nice! I wish that this was showing when we were in LA. sigh

John Tottenham a wonderful 'Foreward' to your exhibit! Which makes me wish it is a part of it, as perhaps an intro or brochure material. What a wonderful writer you are. Precise and evocative. Perhaps you could create a verbal portrait of each of these girls now middle-aged. I was only a little older then when this truly devilish, dastardly event took place, 'married with children' living in Laurel Canyon. A friend's father and step mother had just gone to that house on Cielo as prospective buyers! For years and years drove by on Fairfax what had been Jay Sebring's salon and which was still designated as that.
You as a writer would not have to have lived a life much to write a wonderful memoir. Not many could do that!

Thank you John for your great story. Over the years I have been told by many how the MANSON story has affected them. Now, I wonder how many folks are NOT even aware of just how much the Vietnam War and or the Manson Family story affected THEIR impressionable lives. Those (2) events changed FOREVER how we relate to mass VIOLENCE.

As a child, did YOU rebel against being placed behind a chain-linked fence all day Monday -Friday ?