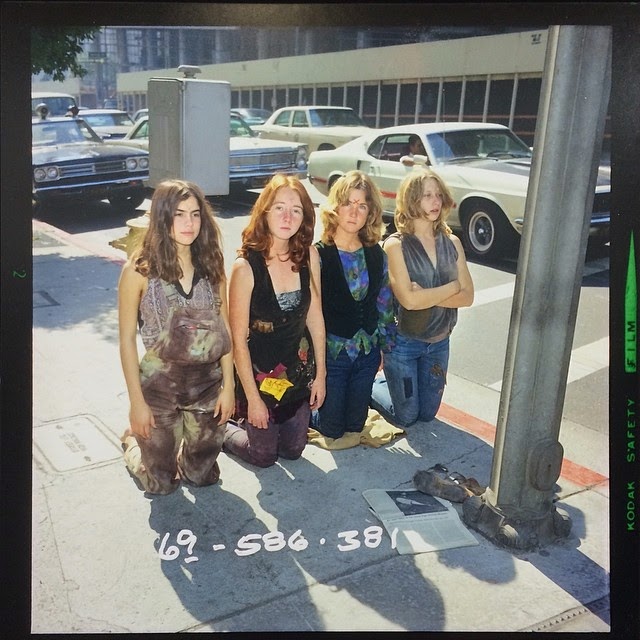 Not bad looking at all! Wven Squeaky had potential. Wow. Manson had a variety of girls. Blondes, brunettes, and his favorite....reds....

Squeaky has quite the sunburn on her nose, it must have been awful for her sitting on the corner in the sun like she did.

Hard to tell from this version, but that white car behind them is a pretty sweet 1969 Mach1

I always wondered how Squeaky survived the nudity in Death Valley thing. Ouch!!

Looks like Ouisch is sportin' a nasty open sore above her right wrist....then again maybe it's dirt.

I believe Sandy is wearing the top half of the court jesters costume she wears in, Inside the Manson Gang. There's bound to be a story about that costume and I'd enjoy hearing it.

I have this photograph and there is nothing on her arm.

My admiration for Ouisch was rapidly declining...

That Ruth Ann Moorehouse is a damn good looking girl. Cappy isn't bad either. The two girls in the middle are just batshit crazy. And that's cute in it's own way, I guess.

I've always wondered what method(s) everyone used when they "X"'d their foreheads. Did those not in custody tend to do it in a collective group? As hygiene wasn't one of the biggest priorities in Spahn and Barker Ranch at the best of times, and things like hepatitis and septicemia weren't exactly bandied about in between bouts of dumpster diving, was it likely they passed around the same implements for communal use?


I seem to recall one method of “X”’ing involved using matches to heat bobby pins and using the pins to brand the “X” on the forehead, but I can’t recall where I read about this method.

I don’t know why I’m so fascinated about this, it’s just whenever I see Family members freshly “X’’d, it piques my curiousity. Whenever I see a group photo like that, I kind of assume they all did it at around the same moment in time, yet in that pic it appears as if Sandy’s “X” was the most prominent in contrast to the other girl’s. I also wondered if there was any level of “one-upman-ship” surrounding members “X’ing themselves from society – was there any sort of “your “X” could be a bit deeper” peer pressure going on in that environment?

I suppose my slightly macabre interest in the methodology stems from the fact that they made such a visible show of having “X”’d themselves out of society but you rarely read accounts of the, for lack of a better word, practicalities, surrounding the ritual.

As for that mark on Ouisch's wrist.....I tried enlarging the pic. I'm wondering if it was a gash resulting from something like a buck knife. At that moment in time, weren't the girls in the vigil renowned for carrying sheathed knives with them (as at the time apparently it was legal to walk round LA with a sheathed knife, or some strange loophole allowing this)?

bucpaul2812, That is actually a close up of a photo that has the girls kneeling on the sidewalk and the mark is absent in the original.

Buckpaul2812,
I think I read somewhere that as the x's healed the girls had to remake them. One of the methods that I seem to remember was to burn them in with a soldering iron.

The ones in gaol burned the xs on with heated bobby pins, then ripped open the scabs with safety pins. The others did it with razors in a group, it was like a ritual and an initiation 4 newcomers. This is according 2 Bugliosi & a few other sources.

Thank you Blythe, and welcome!

A picture taken in the light of day the image clashing with the reality of who they were.Each of them being a part of some murder.

Rare photo is right...I don't think I have ever seen this particular one.