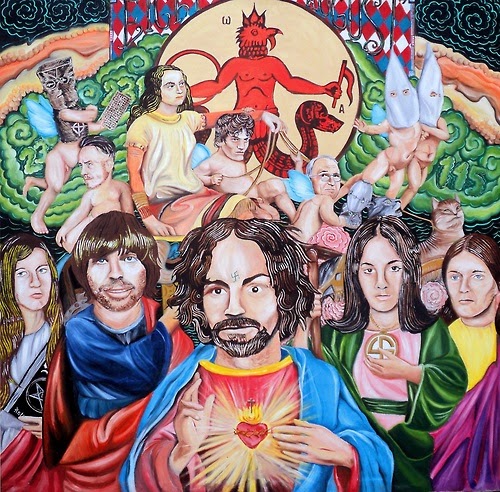 What exactly was it that made people want to spill their guts out (no pun intended) to a man named Charles Manson? How did Charlie become so skilled at reading people? Was it just something he was born with, or was it something he learned in reform schools/prisons? Was he always charming? Back in the days of yonder, when he was a pimple-faced teen, did he have the ability to charm the girls out of their poodle skirts? Did he purposely pick certain people he knew he could dominate? Is he a man, monster, or both? What do you think he is? I don't think the answer is all that complicated. In my opinion, and I am sure I am going to get reamed for saying so, he is an extremely dangerous, unstable man who was nothing more than a clever pimp. His ability to get people to do stuff on his command is what makes him dangerous. That, and his opinion that human beings other than himself had no rights to their own lives & money. Their money was his money, according to the Gospel of Charlie. He always talked against being materialistic, but he was always the first one reaping the benefits of other people's goods. Manson loved the benefits of money more than he has ever let on, and that, right there makes him more human than ever! You didn't ever see him turning his nose up against all of the material possessions, luxuries & comforts that Dennis Wilson's money provided, did you? Hell no! He's no fool. The following excerpt from Paul Watkins book is an extremely good description of CM:

Later people would ask me how a man like Charlie Manson could ever be considered Christlike. How could he ever get that close to people, so close that they spoke his rap, and thought his thoughts. The answer is simple, really. He listened to them, each of them. He concentrated on what they said. He sympathized with their problems, knew their idiosyncrasies. He allowed them to express all their fears, hopes, aspirations. Seemingly, he did not judge, he merely listened, and focused all his attention on them. He became friend, brother, lover, and father. He gave himself in a way that, perhaps no one else ever had, particularly in the beginning. Ironically, few people ever really pay attention on that level. He taught the girls not only to love their minds, but their bodies, and to use them without inhibition. What he had started at Spahn's, he continued at Gresham Street. He was always changing the motion, remaining unpredictable.

He went on to write:

The girls in the Family adored Charlie; he knew each of them-their hang-ups, their likes, dislikes, phobias, their tastes in food, sex, music, their backgrounds-everything. Whenever someone appeared who might cause a problem to our scene-a narc, redneck, probation officer, anyone from the straight world-Charlie knew immediately which girl would be best suited to neutralize that person. He was masterful at this; to do it, he had to know his women well. 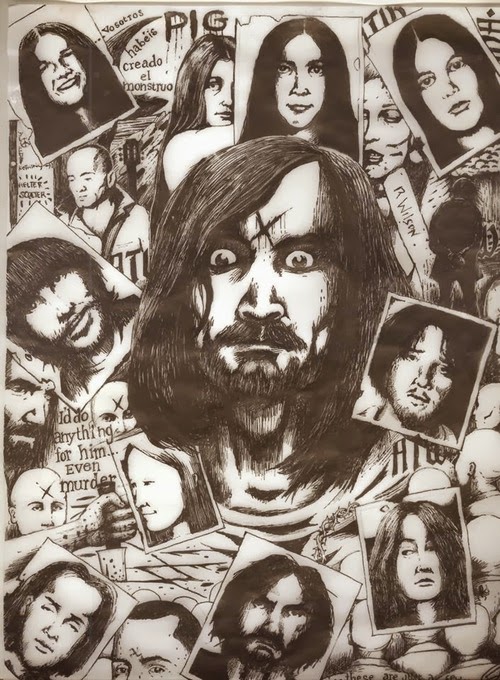 In closing, I would like to add that while I am sure Manson is a fascinating character to know, and to correspond with, he is just too damned unstable to let out. He couldn't just go out into the desert to disappear into anonymity, because every moron in town would be chasing after him, following him around, and trying to recreate "The Family." Of course, I am sure old Charlie wouldn't mind an assortment of groupies following him out there to cater to his every need, but we all know that isn't ever going to happen. While I think Tex Watson is a helluva lot more dangerous than Manson ever will be, I still don't think he is innocent.

The people that attached themselves to him were, themselves, criminals, derelicts, vagrants, criminals, drug abusers, down-and-out, and nothing left to lose. They had nothing, or they were so hell bent on defying mom and pop that they chose to be with Manson because they knew he was an antithesis of what their parents wanted for them.

That being said, Manson became a parent to them and knew they were looking up to him as an elder and he used it, to get what he wanted. No con, just using. To con, you have to first make people think they are dong something for one, valid, reason and in turn doing something in direct opposition.

He got criminals to steal for him. Nothing different than what they were doing before.

He got rich trust-fund kids to ask mom and pop for money – same as they did before.

He got thieves to heist cars, drug-users to procure drugs, nasty bikers to bring in guns and ammo.

He was a criminal, and they were all on the same level.

Mix all of that with drugs, and a bunch of angry kids, and murder is very easy. Women get dumb thug men to kill their husbands for a meager inheritance all the time by using the tools that are there – a dumb criminal who needs money.

People over-analyze the Mansons and give Charlie WAY too much credit for being able to control. He as an asshole and he controlled by being one.

No one wanted to get on his bad side, but wanted to be around him for the above stated reasons.

Sounds to me like someone wants to SEE & TASTE the secret sauce.

Anyone ever SEE what an ultra-violet "Black Lite" can reveal to the naked eye? You can SEE things like every distinct mineral on the earth in total DARKNESS.

A "professional" can detect a "potential" dangerous Charlie Manson at the early age of TWO (2) years old. So, now what? Should we BAN two year-old "defectives" before they cause some serious damage?

Ann and Dooger,
You've given us two interesting perspectives. Thinking about this could occupy my brain for some time.

There is term used in sports to describe the status of a team. Basically it is said that you are what your record says you are. If you review Charlie's lifelong criminal record, that pretty much sums up who the man is. A failed con artist, thief, pimp and lifelong manipulator who stumbled out of prison in 1967 and found a small group of young searchers and outcasts of the antisocial variety in a time of great cultural change and together they stumbled into more criminal behavior and violence. To quote that great sage Archie Bunker "whoop-de-dooh!

I am sorry if I offended anyone with this posting. I know there are a lot of friends/wannabe friends out there that think Manson is a stand-up guy who was framed. I am just not one who thinks he is. I wrote this a while back after I had seen a video with a certain person who claims to be "in love" with
Manson, and I just started wondering what made this man tick. While I think Manson is probably an interesting person, the people that are acquaintances of his now, never had the opportunity to live with him, or to be around him constantly. They don't realize he used to beat the shit out of young people, and be a general bad seed. An overall dirt bag, who used every, single person he met. If I would of been the parent of a teen daughter, or son, for that matter, I would of been horrified if my teen would of been mixed up with a 34 year old bum like Manson. Just think how some of the parents felt, after Manson was exposed. They were horrified, just like I would of been. Just an opinion. I don't mean to offend anyone.

mrgroove nailed it. He was a lifelong loser with great people skills, able to befriend and eventually manipulate disenfranchised young people.

I figured a lot of people would be offended by it, but maybe they just didn't comment, which is a good thing! Thanks, Patty!!

The sticky point with your post is in the first few sentences / questions. They ask the primary QUESTION that should actually be the bi-line for the "Mansonblog" Was Charles Manson something special OR just another loser ? - It is the ISSUE that keeps HIM a mystery and will keep him in the news FOREVER.

To simply call HIM a "loser" or "special" is not unlike casting your VOTE (one way or the other) for a candidate or a ballet measure. You could just say: I am a liberal or conservative. We would then know your opinion, without you actually saying it. IF you want us to agree with you, maybe a few FACTS which actually tend to PROVE your stance would be helpful. But, why would YOU give a shit whether WE agree with you or not. The first few questions in YOUR post exemplify your valuable insight into the MANSON mystique. You made me think and remember WHY we even spend ANY time dealing with a decades old murder case.

In reality, to some extent, WE are ALL losers and WE are ALL special. IF they didn't teach you that in "school" - it's kinda like Ms Obama recently revealed: She graduated from the best ivy-league college in the country, but when it came to feeding her first child, SHE didn't KNOW what to feed HER.

We all know about how effective Charlie's charms were on the cast of characters (aka "the family") but what about all the other hippies and searchers that found themselves interacting with Charlie and his followers circa 1967, 1968 and 1969 who bailed out on him and his scene? If Charlie was so good what about Reverend Jim Jones whose number of followers (in his lifetime anyway) far exceeded anything Charlie ever managed to compile when he was between prison sentences?

I can't help view the Tate/La Bianca murders as being the result of a confluence of a manipulative con artist falling out of prison at the same time a post WW2 baby-boom generation was coming of age with an emergent youth counterculture in an era of great political cultural change, as a draft was being conducted for a war of dubious purposes. All of this plus the addition of an emergent drug culture sweeping the inner cities and suburbs. Charlie's charms worked for a small demographic of those on the west coast, on the fringes of the counterculture who didn't have the where-with-all to find themselves a less psychotic group of people to latch onto. I'm relatively certain Charlie alienated many more with his "charms" than those he enchanted with it.

It was, in effect, the perfect storm.

My guess is that if the 60's didn't happen the way it did, Charlie would have come out of prison and gone back to pimping, thievery and other half-assed attempts at fraud.

Ann,thanks for providing such a thought provoking item.

Dooger - I think you are right on the money with your assessment of both Charlie and those who chose to consort with him. Many of the Family had already been in trouble of some sort before meeting up with CM.

Dooger - from reading some of your previous posts, did you ever meet Manson?

No, thank you, Equinox! It is something to think about.

Y did you delete my comments

rick john, I'll tell you what, you tell me your real name and other names you use so that I can post them. Then I will restore your comments, how's that?

It should be obvious why I deleted your comments.