Bruce's Parole Has Been Reversed Again 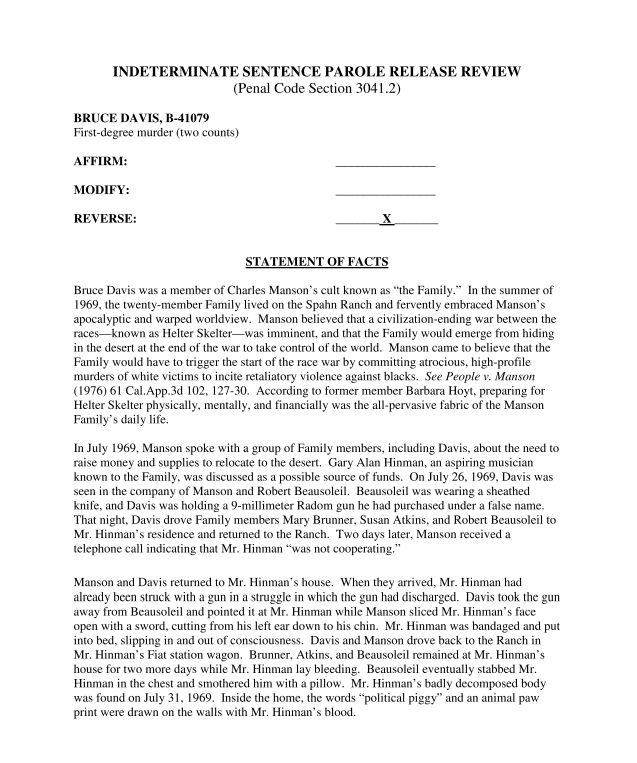 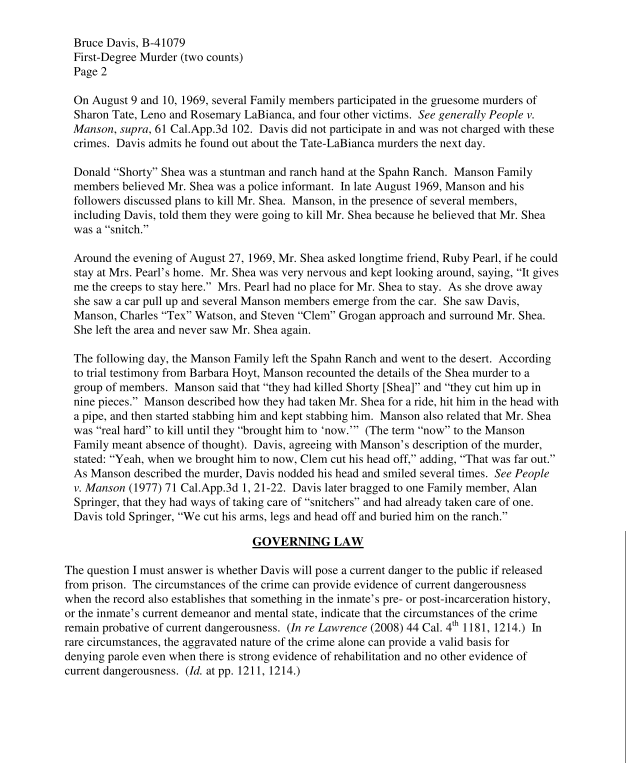 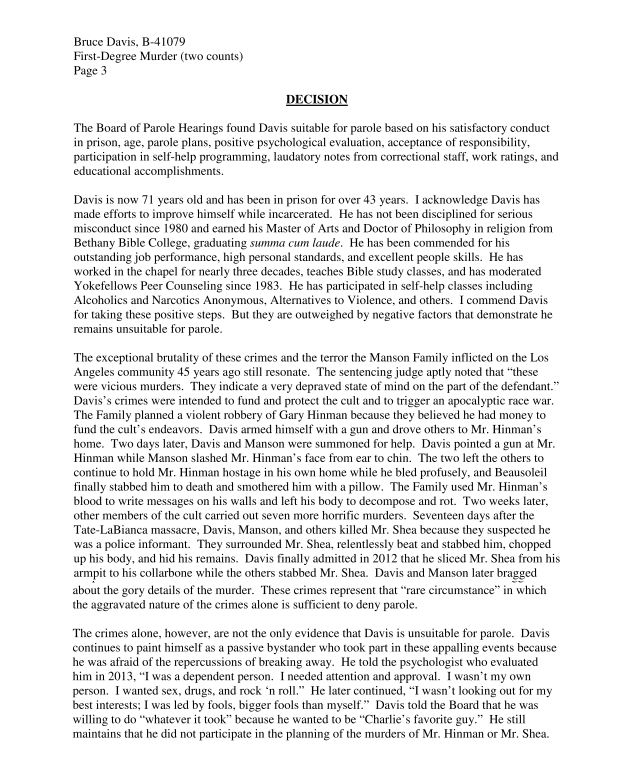 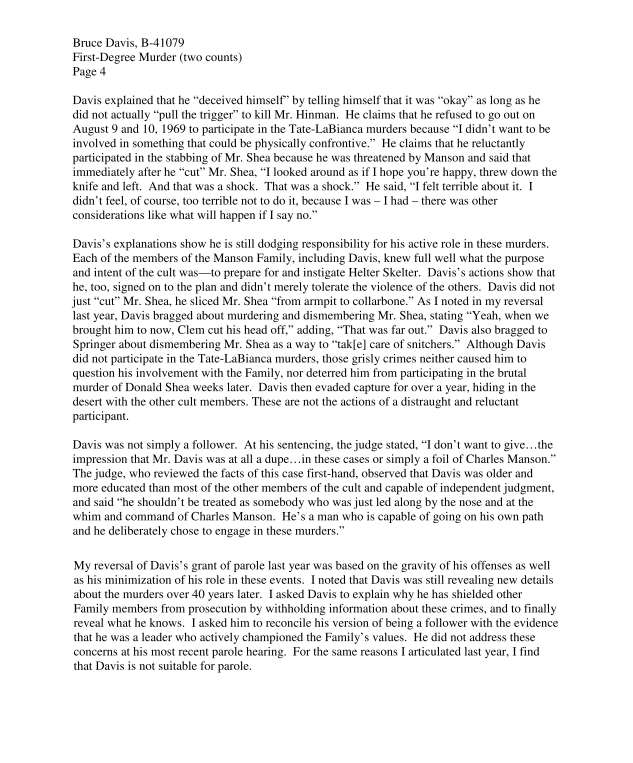 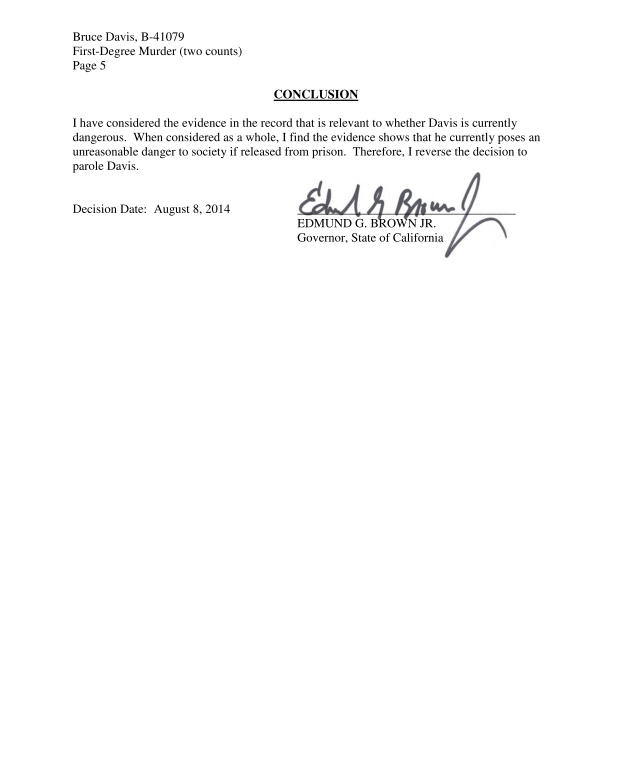 I still don't understand why BD can't get out, but Steve Grogan was released in 1985.

Grogan made a deal. He would tell authorities where Shorty's body was buried and it would earn him eventual release. He did not get released immediately but served a little more time.

As it stood, before Shorty's remains were found, there was a conviction without a body. Given that Shorty lived a somewhat transient life I believe that the authorities wanted to be absolutely certain that Shorty was indeed dead and wouldn't just show up some day so they made a deal with Grogan.

WOW. First off, his reasoning for reversal is understood - but he is citing bunk information (dismemberment, beheading).

Obviously at the time Davis wanted to get away with the crime and hid, but that was 45 years ago.

Brown has released far worse murderers who did far more violent acts. And the fact he reversed it on the 45th anniversay is not a coincidence.

ATTN: Col: Just read the Government's "Statement of Facts" regarding the Manson Family and Bruce Davis and signed by Jerry Brown. I'm through fucking around with those "Socialist's" sacred proclamations. Adolf Hitler was a SOCIALIST, as is Obama. IF it's Helter Skelter they want, it's HS they get. Not much $$$ in "Death to Pigs" anyway.

BTW: It was on August 8 that Richard Nixon also quit the US Presidentcy. That's three US Presidents - ALL fell to the Vietnam Curse.

Very disappointed. I thought we finally would get to see how he and us would react to freedom

Robert and Dooger, right you are. It seems that the powers that be do not feel a responsibility to speak the truth. While they demand complete honesty from the prisoners, over and over, they do not hold themselves to the same standard. It's discouraging as hell.

Remember that photo collage someone uploaded of Bruce and Charlie? Some astute commenter observed that Bruce was like that high school girl who slavishly copied what the most popular girl was wearing. I get the impression that Bruce desperately wanted to be like Charlie but when it came down to genuinely getting his hands dirty on the 8th and 9th he wasn't capable of following through.

This seems to be something of a pattern with Bruce, where he's on the periphery, but not actually in the middle of things as such. He talked a great talk back in the day (like Dooger said re: the beheading, etc) but he seemed to step aside and participated only when Charlie specifically told him to do so. Which, IMO, debunks Brown’s assertion that Bruce was a leader, rather than a follower.

What happens now regarding another Parole Board hearing for Bruce? Will it be in a year? There should be a limit on the number of times the Parole Board's recommendation is overturned by the Governor because it makes a mockery of the Parole Board process.

The other Manson Family members must be feeling dejected on hearing the news. OK, they have all got different circumstances, but it looks like any prisoner tagged with 'Manson Family' can forget it.

Yes, equinox there will be another hearing in a year. A while back I asked Bruce's attorney about the number of times a reversal by a governor for a specific prisoner can be made. There is no limit and he went on to tell me that some prisoners have been reversed numerous times.

It looks to me that Bruce's involvement in Hinman was minimal (driving the vehicle and holding a gun), so if Bobby B thinks he is going to get the red light from the Parole Board in December 2015, he will be disappointed.

I wonder why Bruce was driving Manson back and forth to the Hinman residence? Manson used to drive about irrespective of whether or not he had a licence.

The statement from Governor Brown makes no specific reference to Marina Habe or Joel Pugh, but I wonder if this was brought up by the DA's office. There was a point in time when dead bodies turned up everywhere Bruce went.

Given the success of Grogan's deal, maybe the other inmates should try to make deals with whatever they know about what went on at Spahn and Barker's Ranch.

It does seem unjust that Kasabian, Grogan and Mary Brunner have been walking about free.

If looks could kill Sandra Good should be in jail!

Deb: It's almost sad, and as Charlie said: "You have to sneak to get to the TRUTH !"

BUT it's a necessary government procedure to CONTROL the masses. From birth WE are ALL programed to accept the establishment's "Statement of Facts." In reality, the "establishment" is PROTECTING US from the TRUTH. As Jack Nickolson says in "A Few Good Men" "You can't handle the TRUTH." Once in awhile you have a guy come out of nowhere and say shit like: "Know ye the TRUTH and it shall make you FREE." Like - where did shouting that on a soap box get him. YOU have only a very short time to visit on this earth. So question and investigate EVERYTHING in order to discover the TRUTH, but do NOT cast your pearls before swine. Instead, silently Make IT work for YOU!

The only misused word in that paragraph is "PROTECTING."

When it comes to licenses: EVERYONE there drove. And contrary to Bugliosi's beloved theory, TEX DROVE ON THE NIGHT OF THE TATE MURDERS, not Kasabian!

Sadie and Tex both confirmed this.

And want to talk about injustice? According to Bruce, Bill Vance was standing above Shorty with a bloody knife and he never faced any charges. Shorty punched Bill out, and Bill payed him back (motive).

Larry Bailey was there too.

And Tex stabbed Shorty AND instructed Clem to hit him with the wrench/pipe.

Those three never answered for it.

YET they want to hold Bruce so accountable for this crime, that they won't even let him go based on 45 year old BUNK information.

Manson wasn't lying to Nuel Emmons when he said a handful of people got away with Shorty's murder.

Sorry MAX, they are PROTECTING you and I and everyone from so much ugly TRUTH - we would ALL become mentally ill if we heard it all in "real time" Imagine IF YOU heard every piece of ugly TRUTH coming from every corner of every town, of every state, within these United States in "real time" every minute, of every day. You would begin to think YOU were in some kind of HELL. - and you would be.

According to the link below, Manson has filed the first round of paperwork to marry Star. I wonder if marriage (if it ever goes ahead) is a way of ensuring Star gets his estate after he passes. Perhaps she will be able to benefit from any revenue which he is unable to get due to his crimes.

Note the timing of this announcement - takes attention from the anniversary. Here's the link:-

Bobby B has several Facebook pages. Here is a message posted yesterday. I nearly died laughing when he talks about his 'hectic work schedule' and that there may be a delay in him replying to you due to 'circumstances'.

"I have read a few messages and comments posted to this my personal facebook page indicating some uncertainty about how this page is even happening. First, please be assured that this is really me. While it is true that, being incarcerated, I am not able to access the internet directly, I'm not entirely helpless. With assistance, I'm able to read your posts, receive messages and images, and respond to the extent my hectic and crazy work schedule permits. Assume that there will be some delay due to circumstances; otherwise treat this as a normal facebook page. I am enjoying this way of keeping in touch with all of you.

Yes, it's really really me,
Bobby"

Robert, protection is the last reason in the world for everything being covered up the way it is and has been.

Covering up the truth in order to perpetuate the sick, demented and demonic agenda of the 1% hardly diminishes the degree of hell that we live in.

When the veil is finally lifted (which it inevitably will be) there will be a lot of hell for A LOT of people because they will have to immediately face the fact that they never bothered to look outside of their perpetual fantasies. They never bothered to ponder the idea that something is SERIOUSLY wrong and worth taking a look at.

Which reminds me of a favorite quote by Jung...

"The foundation of all mental illness is the avoidance of legitimate suffering."

This overturn by Governor Brown just underlines what everyone already knows. That the justice system is rigged, due process is two words meaning one word.....nothing. And American society does not believe in, or encourage redemption.

I hear you MAX. Now imagine how frustrated the 1%ers felt when young folks started rejecting THEIR traditional programs, by dropping out and joining communes? AND where does the "middle" class fit in?

They were so frustrated that they used Manson as the poster boy.

Middle class? Yeah I've heard of it. I think it was still a popular song in the '80s.

I've never really been a Bruce "fan" but after reading all he's done during his time in prison, and to deal with the mind f*ck of being approved only to have it reversed several times now, I gotta feel sorry for the guy.

I know he's a killer, and I know he was part of the family and all. But if any part of a jail sentence is for rehabilitation then you have to wonder what else can he do.

He's not a good house painter like Clem - so he has to stay locked up FOREVER.

Further to my above post (off topic, I know) here is the full text that Charlie gave on 28 July:-

You know I didn't break the law. You know you’re holding me hostage. You know I’m a political prisoner.

You’re all a bunch of liars. You’re all lying.
You’re lying for your jobs and your positions. Trying to protect that phony thing you call ‘you’."

I don't know how Charlie knows I'm lying, because I could swear I've never met the old goat.