Patty learned that tourists don't usually stop to photograph prisons in central California on her way to the 45th Anniversary remembrances in Los Angeles. In case you have not already figured it out, Patty doesn't really live in Ballarat: rather, she lives in Northern California about six hours from Chatsworth. On previous trips she has been curious about the women's prison at Chowchilla: aka the Central California Women's Facility (CCWF) where Susan Atkins passed away about five years ago.  This time she decided to drop in, check out the gift shop, maybe have a cup of coffee with the warden. You know, normal tourist stuff.

CCWF is across from the the men's facility (aka Valley State Prison or VSP) on Avenue 24, just east of downtown Chowchilla. Initially, Patty confused the two. The guard at VSP explained that it was part of the women's prison until about two years ago. She was also informed that without permission from the warden, she was trespassing in the parolee pickup lot and would have to leave. It is legal however, to photograph the prisons from the county road he added, though anyone doing so would likely attract a lot of attention. Boy, he wasn't kidding! After taking her photographs, Patty noticed a state vehicle tail her all the way back to the freeway presumably to ensure that she didn't pick anybody up from the surrounding orchards and vineyards. Boy, is she going to give them a bad review on Yelp!

Anywhoo, here are some pics she took: 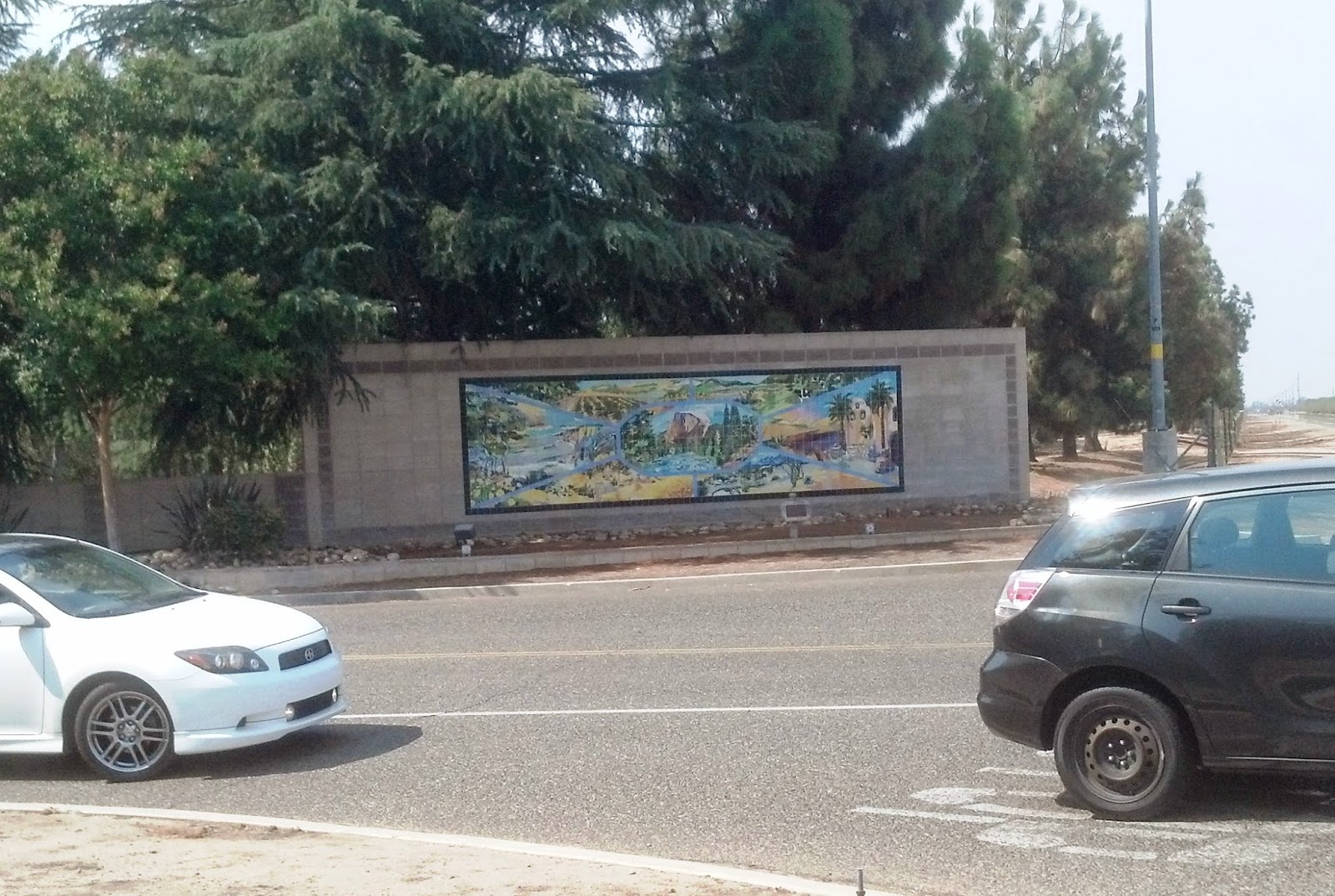 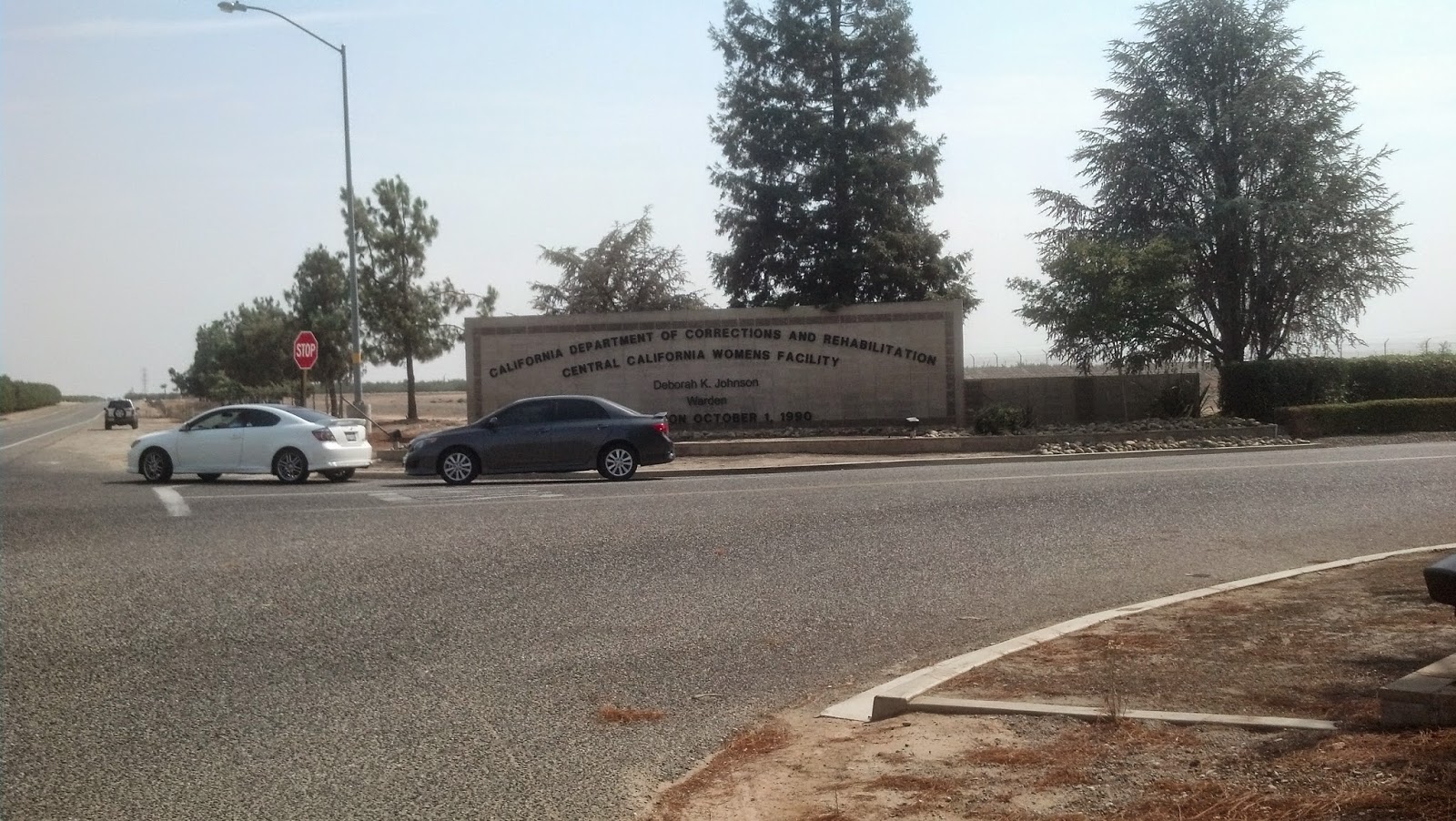 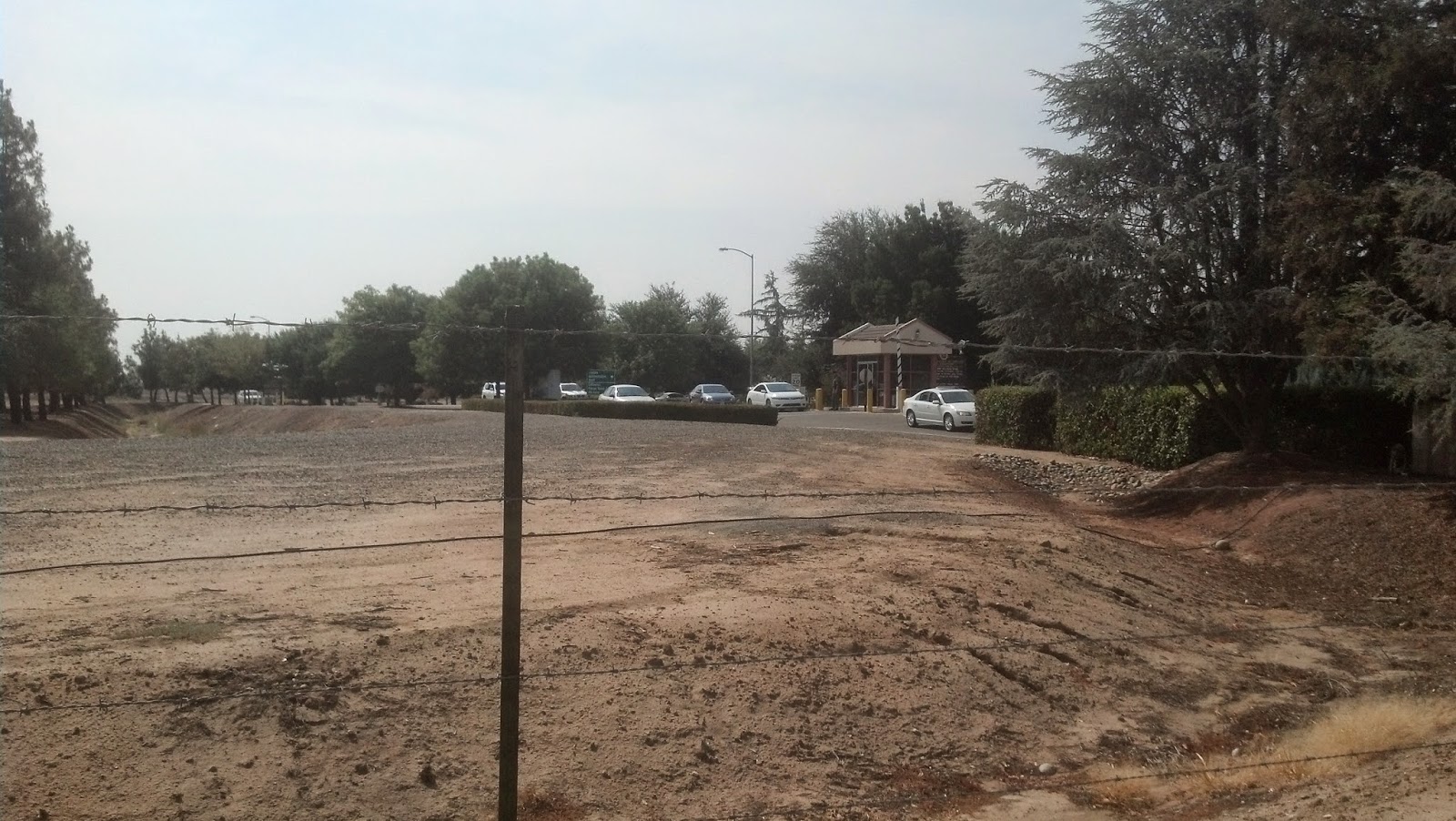 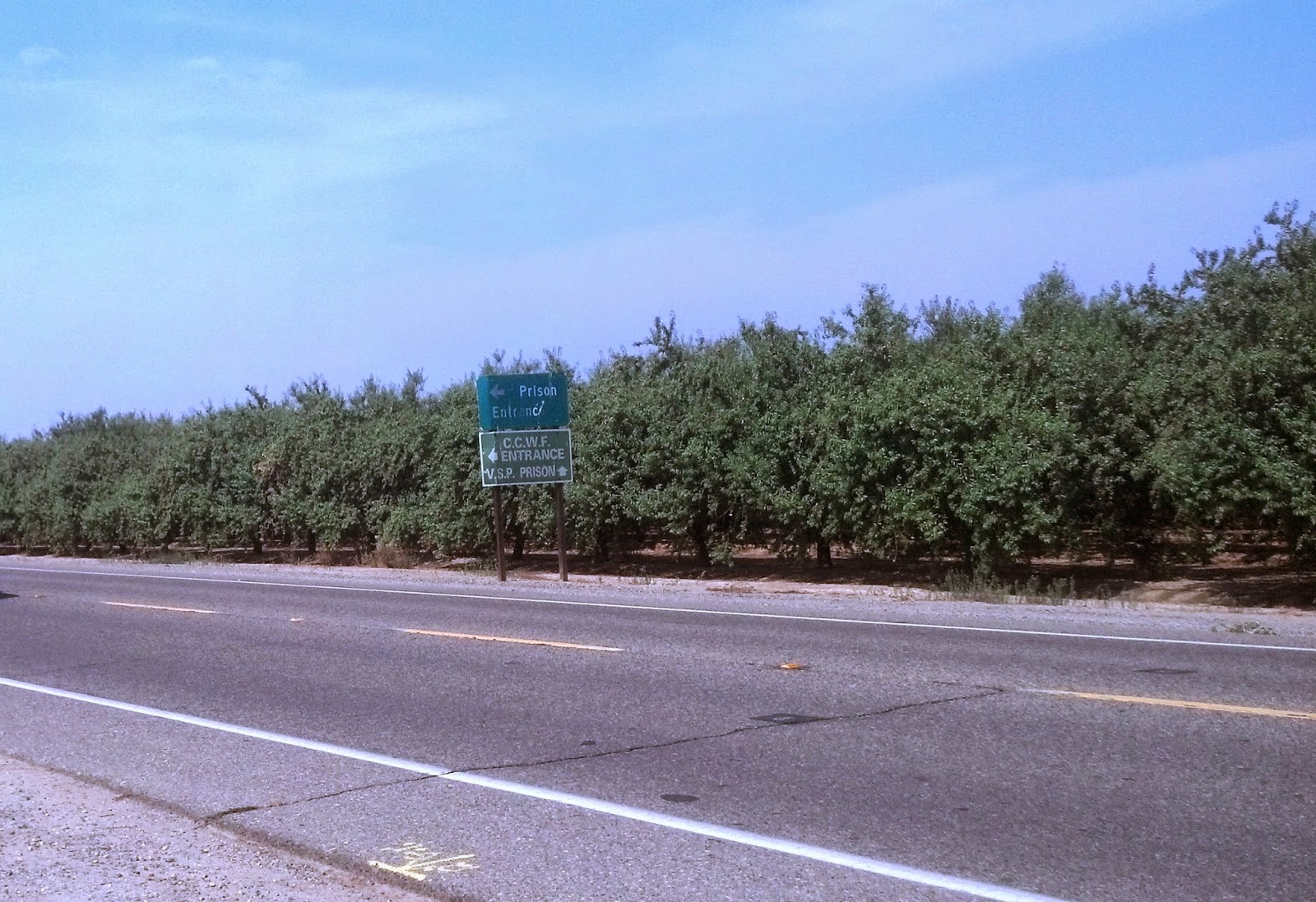 As "Sexy Sadie" from the White Album played in her car, Patty thought about Susan's passing there, how James Whitehouse worked so hard to get a compassionate release for her in her last days. Besides the obvious fact that she took a life, that she had no compassion for a woman and her eight month old fetus forty five years ago, Patty finds James' actions odd because at CCWF, Susan received state of the art care for her terminal condition including what were probably really fucking good drugs. Isn't that compassionate enough? Maybe, some would argue, TOO compassionate. Patty remains ambivalent.

Tsk tsk. Not even in LA yet and already stirring up trouble.

She's just begging to be waterboarded, isn't she?

Patty,
If you give the prison a bad review, nobody will want to live there.


Yet another story has been put on the web about Star's mother objecting to her daughter's preparations for marriage to Charlie.

A bit of a coincidence that this brief interview has been released on the anniversary date. Here's the link below:-

In life there is ONLY "Freedom" and "incarceration" The secret is: How do you "understand" one - without "experiencing" the other ? It sure is nice for someone to provide images, BUT it is THEIR "experience." It's kinda like having a picture of someone fishing in a stream on your wall vs actually going fishing. With ALL the photos on the internet, maybe someday man will NOT even need WATER any more. Then EVERYTHING will have an "anniversary."

Robert
Instead of your crypto Charlie speak, tell us why the murders happened.

Does ColScott need a nap???

Where is the prison?

All I see is a damn field.

I reread the autopsy reports of the victims last night, and I did not know that Sharon had fingernail scratches all over her neck. She was trying desperately to get the rope off her neck, because it was choking her. I got chills up & down my arms reading that. Susan Atkins deserving a compassionate release would of been a travesty, in my opinion. These people made the victims suffer so very badly. Why? Like, for instance, why did they have to terrorize them first, stab them in the face, etc? What could possibly be the motive for being so cruel and vicious? Gary Hinman suffered, Shorty suffered, and not only was stabbed, but had chop marks on his skull. Why didn't they just shoot everyone? I don't understand the reason they stabbed. And I don't care what LVH says about her part. She stabbed a human being. All of them did. Rereading those autopsy reports just reaffirmed my strong opinion of no release, ever!

Max, Patty wasnt allowed to get any closer without written permission from the warden.

The first time I read her autopsy report after ordering it, I felt literally nauseous when I read that and realized the implications. There's a photo of her, taken in those last days, that shows Jay blowdrying her hair. She has a look in her eyes, & her left hand is up, & when I look at it all I see is how she looked trying to get that rope off. Watson, Krenwinkel, &
Atkins while she was alive, can all go to f*cking hell. They're murderers with multiple counts, and liars who still feel sorrier for themselves than the victims (Again, I'm referring to Atkins while she was alive).
Another picture that destroys me is the one on Cielo's site of the orange cat by the garbage cans the morning after. And I was only ever able to watch the video of the removal of the animals from the premises the next morning once. That poor black kitten with the pretty red collar Sharon had gotten him. F*CK Watson, Krenwinkel, & Atkins!!! And Linda Kasabian, too.

Aaaaand, on a lighter note: Orwhut, I'm still laughing at your comment. A classic!

Oh yes, Patty, definitely...American prisons arent bad enough. In addition to the mindless brutality and lack of rehabilitation, we should definitely leave prisoners with cancer untreated and screaming in agony.
Ambivalent? Are you serious? You see, this is what shocks the rest of the civilized world about the US: this kind of appalling statement. To be 'ambivalent' means that you might think it right to deny pain relief to a prisoner. Pain relief for cancer. Patty, this amounts to torture. No matter what that prisoner has done, condoning torture by the State, in whatever form, is not worthy of civilized people. This attitude is why you have all the problems you have: this utter lack of compassion. This attitude of refusing to share money, refusing to 'pay for someone else's health care' and above all, the total complete lack of concern for what happens in the unbelievable horror jails of the US. Prisons for profit which are basically slave camps; prisoners being fed on rotten food bought cheap; prisoners raped and brutalized...in Riker's Island, the guards do this in the medical unit because there are no cameras and the medical staff stand by. Half the prisoners in the US are mentally ill and should be in hospital.
And here is Patty, 'ambivalent' on torture....