In 1992 Eclipse Enterprises published a few sets of trading cards one of which is titled Crime and Punishment.  There are 110 cards in this series which was drawn by a courtroom sketch artist who worked for ABC television.  The artist, Bill Lignante, previously had been a comic book illustrator and comic strip artist for The Phantom, he also worked as an illustrator for Hanna-Barbera.  The LA Times did a story on Lignante soon after these cards came out.  The person who wrote the text for the cards was Bruce Carroll who also worked for ABC television.

There is always someone who gets their tits in an uproar about these types of things and of course there was a law suit to try to halt the sales of the cards brought on by one New York community in which Editor-in-Chief of Eclipse Enterprises Cat Yronwode deftly prevailed.

Cat Yronwode is no slouch in the business world.  She currently owns a thriving Magick/Occult store in Forestville CA, right next door to the town of Guerneville in Sonoma County.  For a truly Witchy experience visit her website or brick and mortar store Lucky Mojo Curio Co.  Cat puts those Manson girls to shame when it comes to Witchy, but in a good way!

Here are all 26 of the Manson Trial trading cards from the Crime and Punishment series. 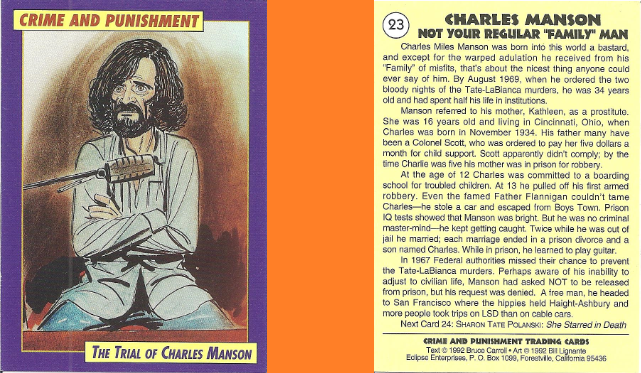 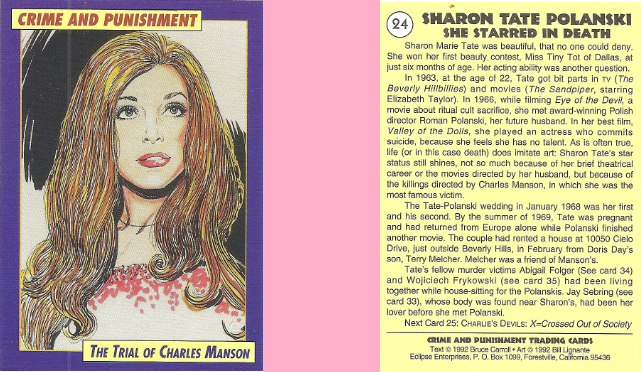 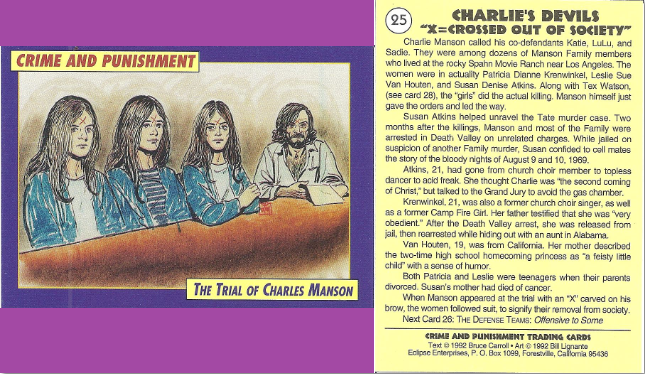 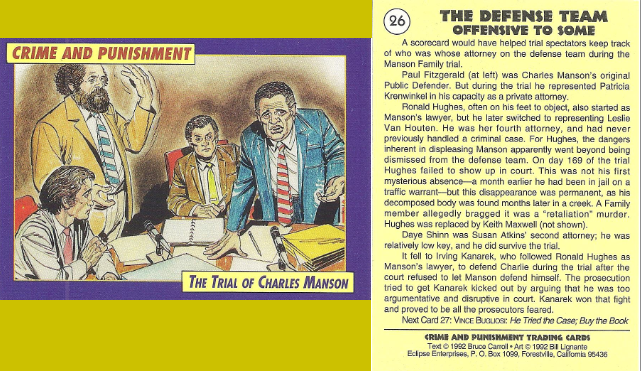 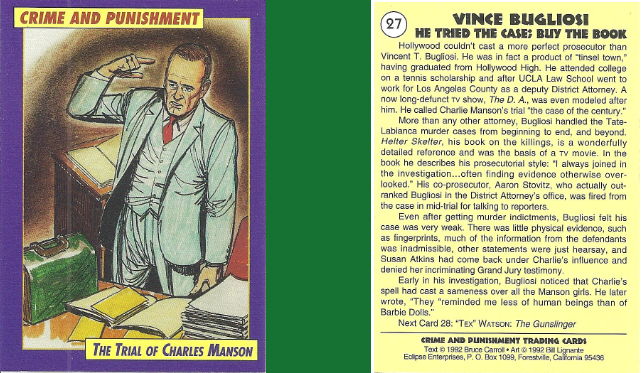 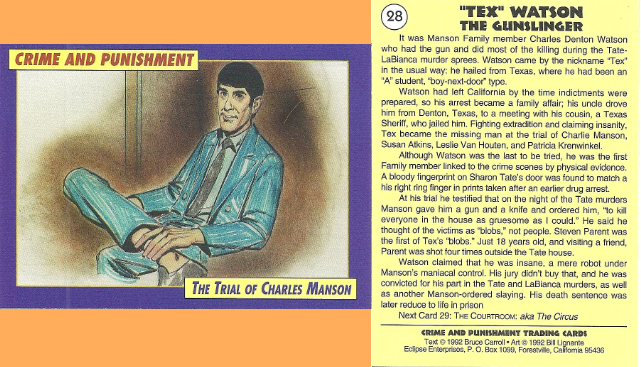 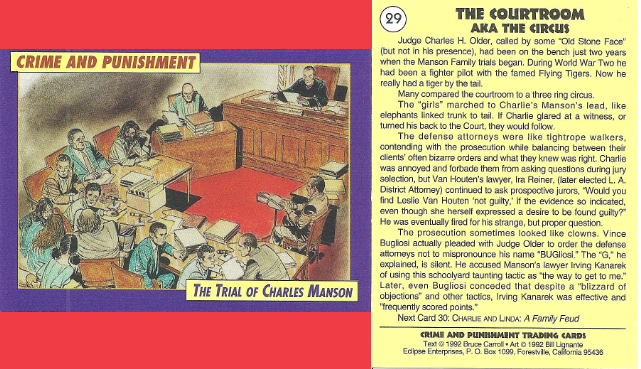 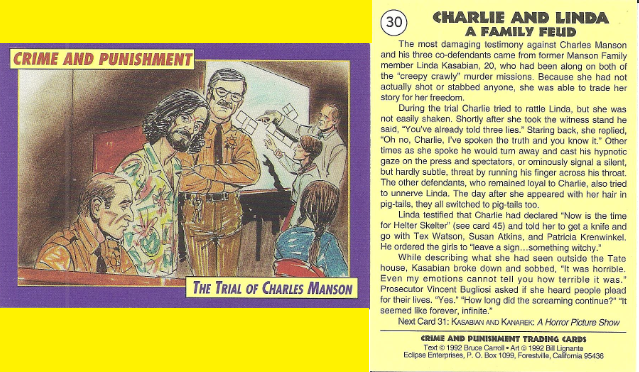 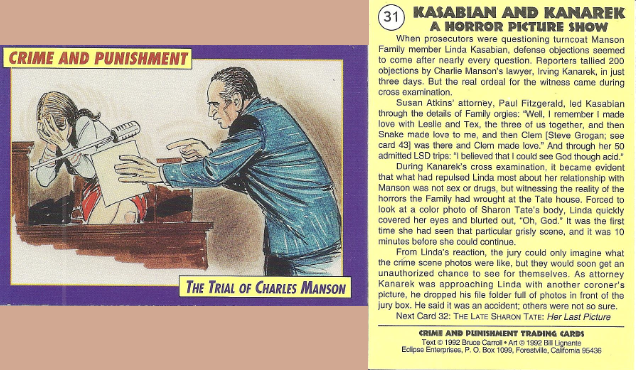 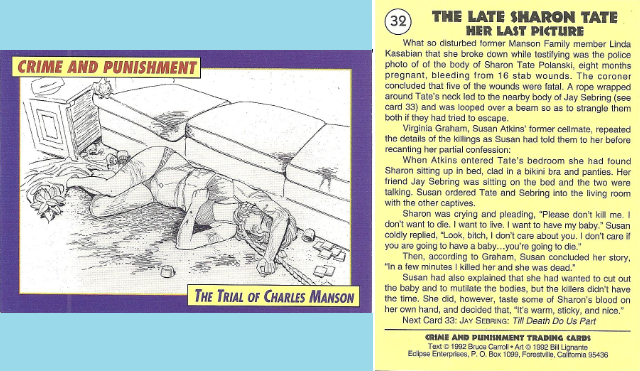 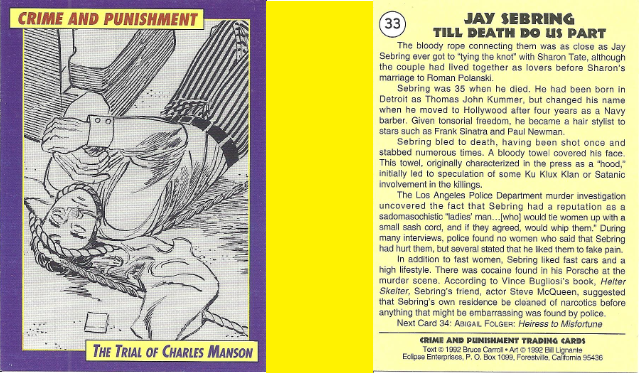 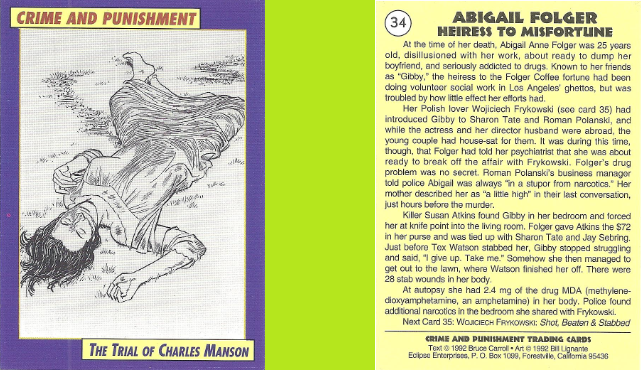 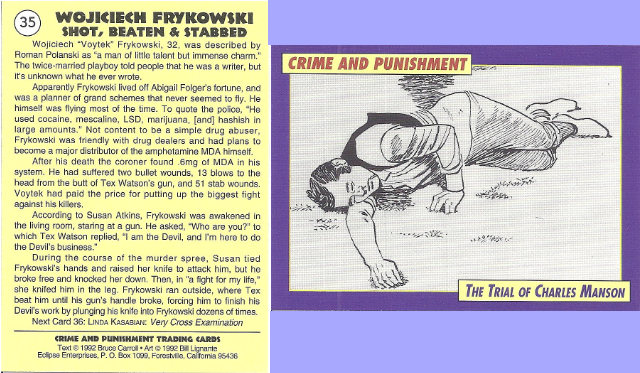 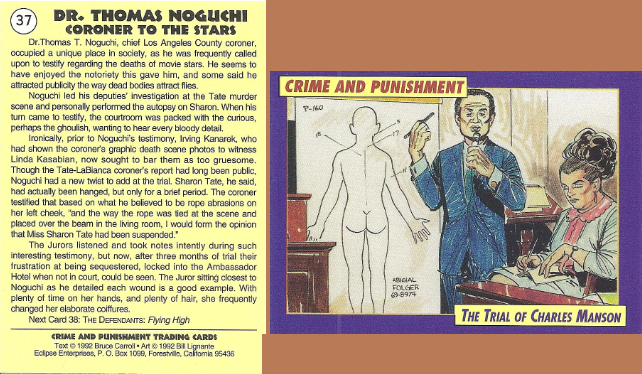 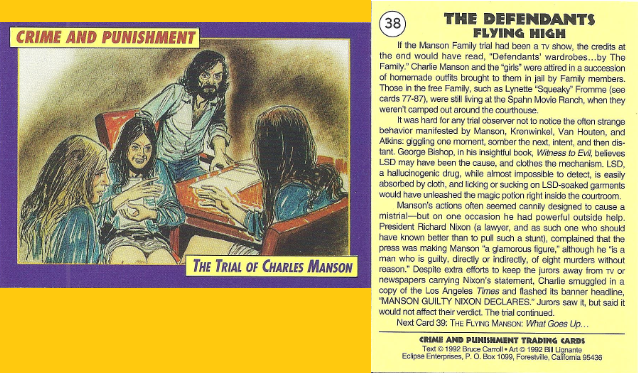 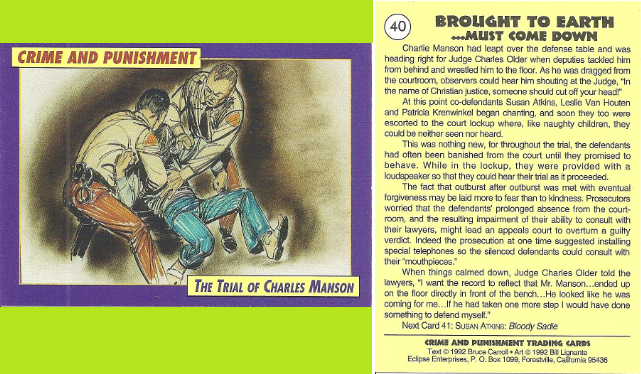 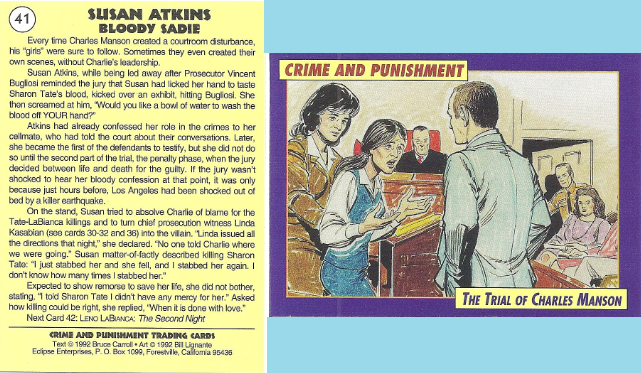 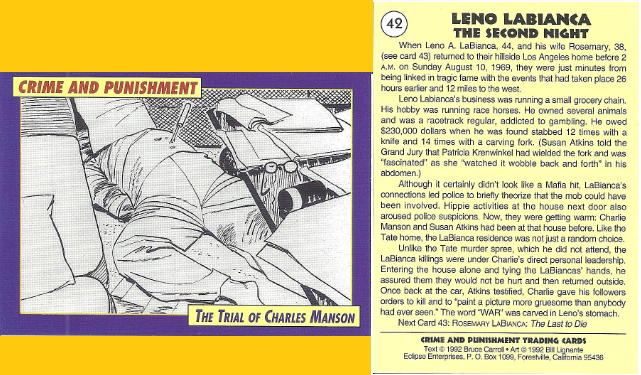 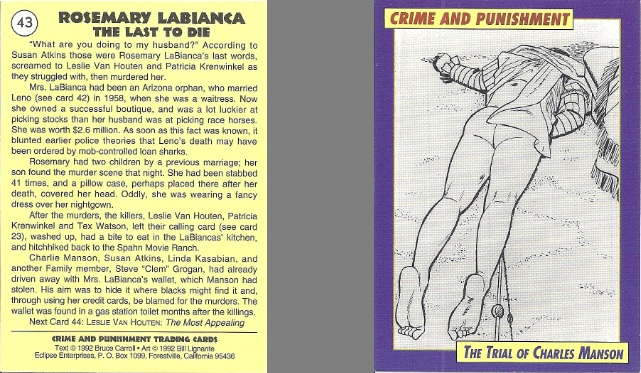 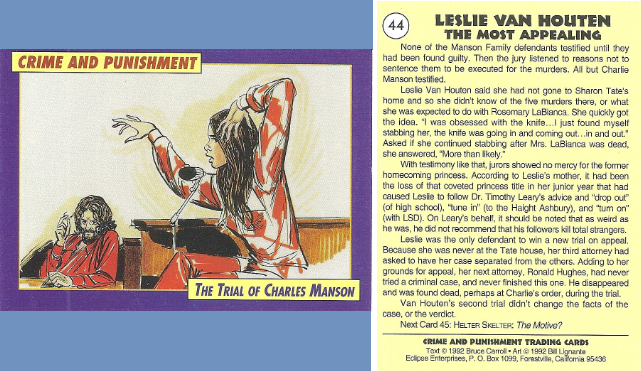 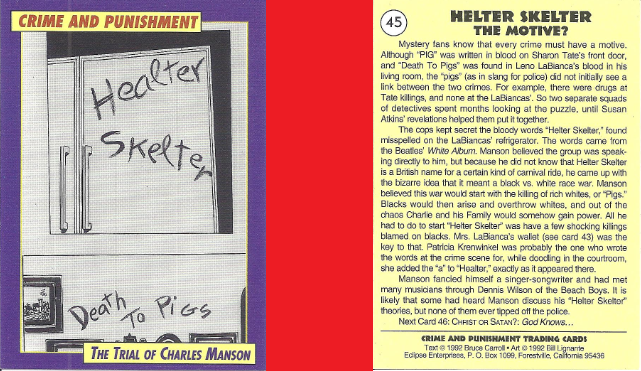 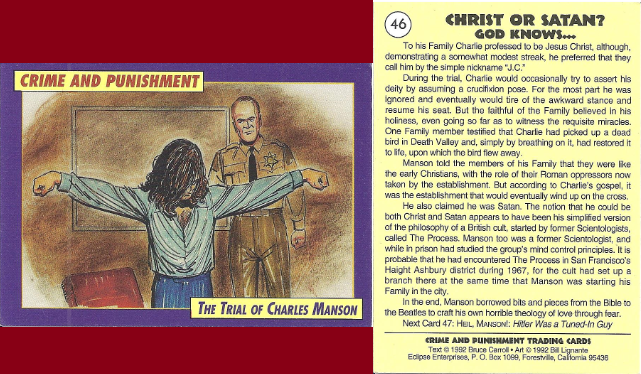 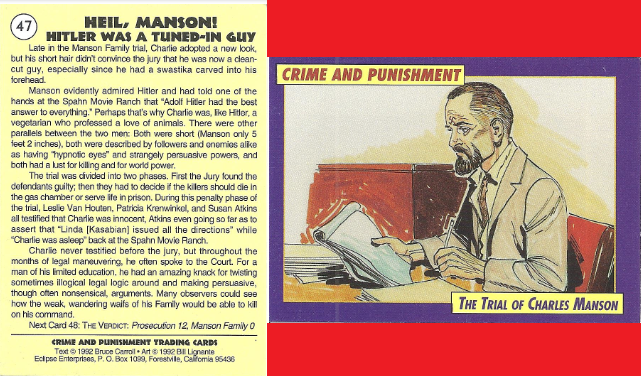 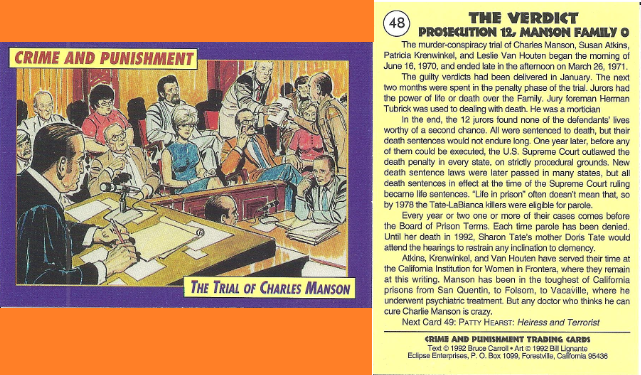 The drawing of Tex reminds me of Mr. Spock.

The victims didn't ever get any dignity at all, did they? Whoever made this, seemed to treat it like a storyboard for a movie.

I seemed to remember controversy over someone printing murderer trading cards back in the early 90's. They got pulled from production. I was able to find an article from the time period:

Very interesting, IF a government agency EXPLOITS a crime or tragedy it's cool, but IF a private enterprise EXPLOITS the very same "crime" it's automatically in "bad taste."

Today a major headline is " Evil ISIS terrorists earn $1,000,000 a day. Watch - when that number reaches one hundred million they will be accepted into the United Nations.

Ok, so which one of you nutjobs bought the sealed box for $19.99 shipped off ebay yesterday????

Full disclosure......I was the idiot who bought the 10 unopened packs. oo-ee-oo

Hey Chats, let me know if you get a Rae Carruth or an Aaron Hernandez. I know somebody that's been looking for them and they'll pay good bucks.....

LOL!
I have a whole sheet full of OJ's somewhere!