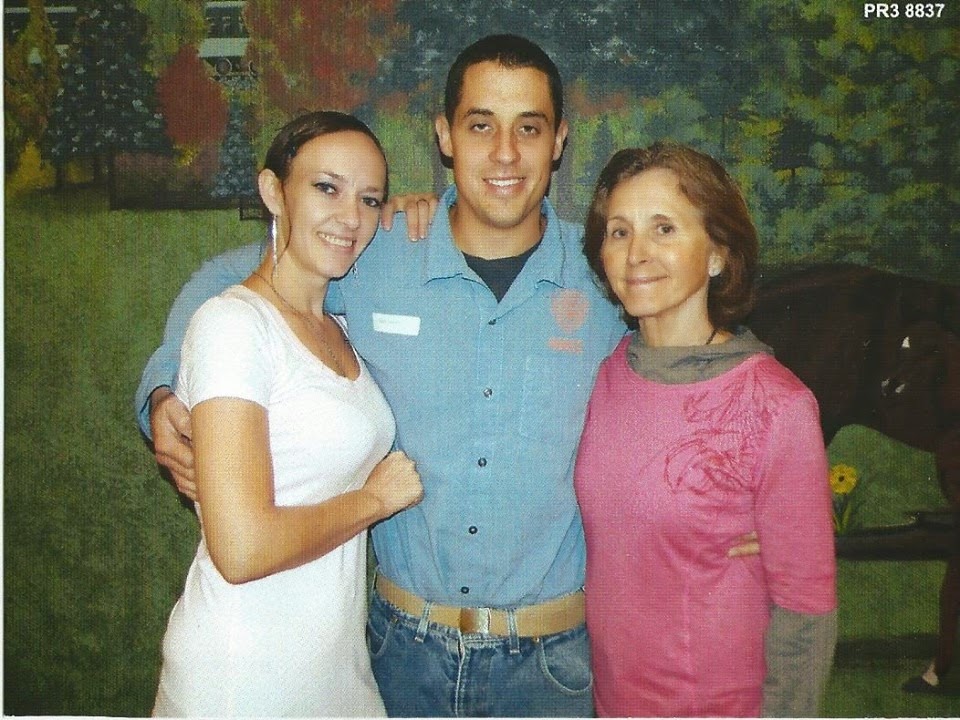 Is that a prison visit photo? If not it sure looks like it.

Looking at Nancy's old photos I'd guessed that her long chin would have curled up toward her nose by now. She surprised me and I think she's held up amazingly well.

Thanks Matt, I guess everyone grows up eventually. I wish some more of them would write a book. I'd be most curious about the process each of them went through to get to where they are. The internal conflicts and how long it took to get back to "normal"

Hump, in those three sentences you have captured the essence of this forum. I couldn't have put it better myself.

It always amazes me to see a new picture of a former family member in the NOW. She looks nice, it would be fascinating to hear the stories she can tell...But would she be willing to remember them?

That has to be a prison visit photo. Ironically, Nancy looks the least scuzzy out of the three. A book by Nancy or Gypsy would be better than any of the others because they were so hardcore.

Speaking of Gypsy, whatever happened to that book she was writing? I seem to remember hearing a while back that it was near completion or actually complete but there were publishing issues (or something along those lines).

Could it be that publishers/authors are holding on to these books till Manson dies?

I am assuming that that is one of Pitman's sons with Monford.

Beauders who is Monford?
Max she must have had to go through a lot of Cable plans to find Combat! Or maybe she likes Duck Dynasty now because of their traditional values.

It is her son with Monfort. His name is Orrin Monfort and this is from prison.

Monfort was an Aryan Brotherhood member that Pitman married, had children with, then divorced. He died in prison.

I'm thinking with those ears and just enough headwind that that girl could become airborne.

Three young Bend men, one a juvenile, were arrested late Monday night in an assault and robbery involving two other teens, one of whom had his wallet stolen, police said.

Shortly after 11 p.m., police responded to the area of Southeast Second Street near Scott Street on a report of a robbery. Two Bend teens, 16 and 18, told officers they had been assaulted and that the 16-year-old’s wallet was stolen, said Lt. Gary Mack. One of the victims reportedly identified one of the suspects, a juvenile.

Officers located Kevin D. Sernett, 19, and Orrin Michael Monfort, 18, and another person in the area of Southeast Railroad Avenue and Heyburn Street, Mack said. Monfort and Sernett allegedly admitted their involvement in the incident, while officers determined the other subject, a juvenile, was not involved.

The juvenile mentioned by one of the victims was located and taken into custody at his home, Mack said, and the wallet – minus the cash – was recovered in the trash at a nearby residence.

Sernett and Monfort were lodged in the Deschutes County Jail on charges of second-degree robbery, third-degree assault and second-degree theft, with bail totaling $17,500, Mack said. The juvenile involved was taken to the Juvenile Detention Center and lodged on the charges. The other juvenile, while not involved in the attack, was cited for minor in possession of alcohol by consumption and also taken to the Juvenile Detention Center.

Orrin has been arrested several times since then too. Arrested 3 times in 2011 for resisting arrest, probation violation, 2010 for driving while suspended - petty stuff.

2006: driving under influence, attemtping to flee

Nancy Pitman is a good looking mature woman which is not my central thought in this post.

Even sketchy people love their families. Conservative people often remind us of their values. The people who continue to love each other despite the odds never seek social approval.

If I came face to face with my Creator, I'd probably just ast him. Why didn't you make everyone whole to begin with? Rather than create man sick, and command him to get well?

Dare I say it looks like Nancy has had some work done?

Well dare, you did say it. And it is dare I say, kind of a TMZ era observation that misses larger points.

Dare i say that conservative people also have their sketchy lives even if they don't admit it.
Andrea i wish i had those cheeks at 38...LOL!! I agree with you...

TomG: Allow me to respectfully push some of YOUR buttons.

What is the name of YOUR creator ?

Is the "sickness" YOU refer to "man" made or "creator" made ?

What do YOU call the "thing" that cures the "sickness" ?

Don't you think it's rather clever and profitable to "create" sickness in a sea of health & wealth ?

I agree with you too, Andrea. A little nip n' tuck but she looks great regardless.

Thanks for all the info from everyone on Monford. I didn't realize you weren't joking when you said this is a prison photo. So Nancy hasn't really shaken the past as much as I thought. I'm reading the first part of the Jeff Guinn book and it reminds me of the early relationship of Charlie and his mother. Also "Adam Raised a Cain" by Bruce Springsteen: "we're born into this life paying for the sins of somebody else's past."

Hump, if you want to catch up on the Monfort topic here are some links:

I'd answer that Robert Hendrickson fellow except that I am an East Coast bird, not taking west coast acid, and even though I read his post three times, I still don't know what the fuck he's asting.

I guess I'm trying to invite you TOMG to comment on the Dr. Dave post where the subjects you touch upon are discussed. I get most everything you say and would like you to expound upon your thoughts.

One thing about Nancy still confuses me. Wasn't there a relatively recent account here of her being a card carrying member of Hadassah? I assume her children were pretty much raised with "Monfort family values" so I wonder how this all pans out. I can't imagine Hadassah and the Brand being ideological bedfellows.

Hey Buc. The Hadassah think was just a joke. We think she married a Jewish guy, that's all.

Ah, I see, LOL. Still, to be a fly on the wall in that particular household during the holidays. The words "never" and "a dull moment" spring immediately to mind.

Suze, that is a simply horrible thing to say, about the girl's ears. Dont we have enough of women's bodies being policed without other women pitching in too?

Nancy is still hot. I want to sit on a sidewalk with her.

I wonder if she every looks back and questions why she would sit back and watch a young couple s life being taken and go on to have children with the man responsible....Was he not murdered also.Anyone that would back the murder of an 18 year old Steve Parent. An about to be mother and all the other victims does not chance she just got away with alot.

Update on Orrin.... I briefly employed him until he failed to show up to work, he was in county on domestic charges. Did some digging, found out all this stuff... was amazed. There is a newer mugshot of him from the domestic. Had visits from cops today, looking for him after he threatened to kill a 16 year old girl and take her bike. Class act. In my brief time with him, he said he could NOT drink alcohol or this stuff happens. His father was dead and not a good guy, and his name came from The Neverending Story. Raw video posted by the cops is here... https://www.facebook.com/albanypd/videos/1019880601463389/

His facebook page is here... you can see the tat in the video as well as the backpack and how he wears his hat backwards. https://www.facebook.com/orrin.monfort?fref=ts

It appears that apple does not fall far from the tree.

Update on Orrin.... worked with him... he failed to show up to work, he was in county on domestic charges. Did some digging, found out all this stuff... was amazed. There is a newer mugshot of him from the domestic. Had visits from cops today, looking for him after he threatened to kill a 16 year old girl and take her bike. Class act. In my brief time with him, he said he could NOT drink alcohol or this stuff happens. His father was dead and not a good guy, and his name came from The Neverending Story. Raw video posted by the cops is here... https://www.facebook.com/albanypd/videos/1019880601463389/

His facebook page is here... you can see the tat in the video as well as the backpack and how he wears his hat backwards. https://www.facebook.com/orrin.monfort?fref=ts

Nancy's kids are gorgeous. I'm not surprised. She was my dream girl back in the third grade, but my best friend got to swap St. Christopher medallions so they would officially be "going steady."

I sure did love her.