DOCUMENTARY Charles Manson: The Man Who Killed the 60s 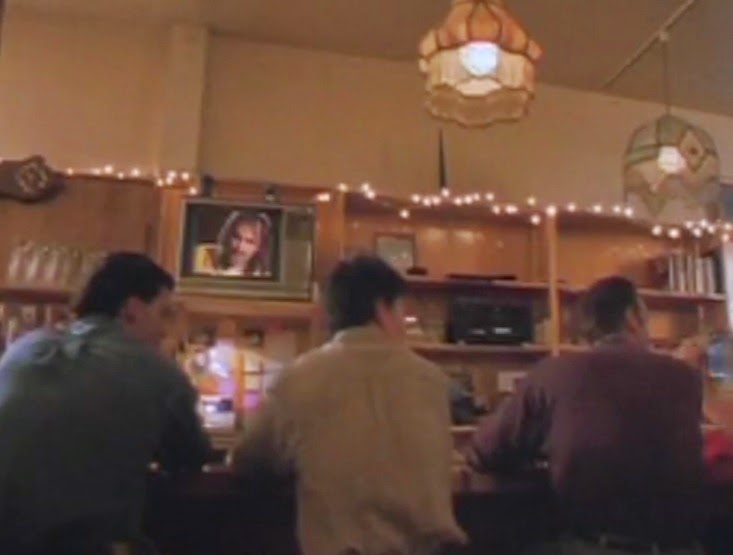 Of course, the very first interview had to be with The Bug, all decked out in a fancy suit and tie sitting poolside in a very strange juxtaposition of formal and casual. "The murders were bizarre," he says, blah blah blah, "guru" blah blah "Christ and Satan" blah blah blah. Patty is worried this is going to be just another fluff piece.

However, here we have what turned out to be a very balanced documentary on the Tate La Bianca Murders and their context within the times. Many, many more insightful interviews followed the Bug including Steven Kay, Bruce Davis, Sandra Good, Paul Krassner, Todd Gitlin, Dr. David Smith, Phil Kaufman, Kim Fowley, Wavy Gravy, and Jim Pursell among others. And, save a few small inaccuracies like Sharon Tate having been hung from the rafters and the Family being arrested near Independence, there were no real cringe inducing moments to speak of.

Charlie pronounces his middle name. This is the first time Patty has ever heard him do so. She always assumed that "Milles" was one syllable, like "Mills." It's not: it's two like "Mill-is." He also reiterates what George Stimson wrote in his book about his generation being more Bing Crosby than Beatles.

Paul Krassner says he is the first one to draw parallels between the Manson Murders and Lt. Calley and the massacre at My Lai during his bay area radio show.

Dr. David Smith says that his medical administrator, Al Rose, went and lived with the Family for a while, and this is how they got enough access to write their scholarly paper on the family's group marriage dynamics.

Wavy Gravy tells the story of how Charlie broke up their Om Circle at the Hog Farm. He says that Charlie was making choking noises out of the window of the black bus, then came out and "delivered a scathing put down of our whole scene." That's when Wavy asked him to leave. "I'm so glad he didn't take offense," Wavy says.

Anita Hoffman says that she and husband Abbie actually visited Spahn Ranch and were "spooked the whole time."

At the end, Charlie is asked if he is sorry for what happened. He sits pensively for a moment, then says "I don't really know what sorry means. I've been sorry all my life." He says that his mother always said that she was sorry he was born. "I understand rules and regulations. I don't understand sorry."

Back in 1994 I sat next to a Wavy Gravy on a eight hour plane ride. He seemed to be a very happy sort of fellow, always smiling. I knew who he was and did ask him a few questions about his life back in the sixties but I didn't want to bother him too much especially since he was flying with a companion. I remember asking him about knowing Manson though and he said something to the effect that he was basically a nobody in his mind so I left it at that. He seemed like quite the character I wish I could have talked more to him.

You have more self-control than I. I would have questioned him relentlessly.

Matt I wish I would have said more to him, he seemed very friendly and more than happy to talk to me but I was afraid he might think I was a pest.Stupid move on my part - he no doubt had plenty of amazing stories to tell which would have made that long flight go very quickly. Nobody else around us seemed to pay him any attention, probably most people didn't know who he was. When we walked off of the plane- we were coming from London- he was right behind me and my sister who was picking me up said.." Damn you can sure tell that guy's from England!" Ha. He did look British with his bowler hat though.

That's why he called wavy didn't he know janis

Vietnam and drugs killed the 60!

I ran into Wavy Gravy at a Grateful Dead show at Cal Expo in Sacramento back in the early 90s. I sat at a card table with him and a teenage girl and help him collect donations for his Camp Winnarainbow. We didn't have much of a conversation. I sat with them for about an hour or two just so I could tell my grand kids that I hung out with Wavy Gravy. My first grand child is due on April 22nd. I'll tell her when she's old enough to have a dialogue with me just to have ask me "Grandpa, what's a Wavy Gravy?"
I also ran into him at the Earth Day festival at UC Davis in the mid 90s. He was MCing the bands. I didn't want to bother him so I didn't try to talk to him.....

Krissy, when I saw him at Cal Expo he was wearing the same kind of hat that Goober used to wear on The Andy Griffith Show except it was multicolored and looked to be made of leather. By the way, I'm not positive but that may have the very last time I dropped acid. Those were the days.....

Too funny Doc!I don't think I could have held it together seeing him in a Goober hat while tripping. He certainly has a very unique look about him that's for sure. Of course from what I remember it's hard to hold it together period after dropping acid but it's been a very long time since I did that myself!

I concur. Wavy Gravy in a technicolor Goober hat while tripping would render me worthless.

What an interesting person.

I think he was a good guy too. You could sense it just being in his presence. No bad vibes there. By the way- when I said I laughed about my sister saying he looked English- it wasn't a insult on either of our parts. I know there are people from England who read this blog. I'm British born and hope to spend my final days in England. He just stood out with his clothes and very British bowler. :) Love the Brits.