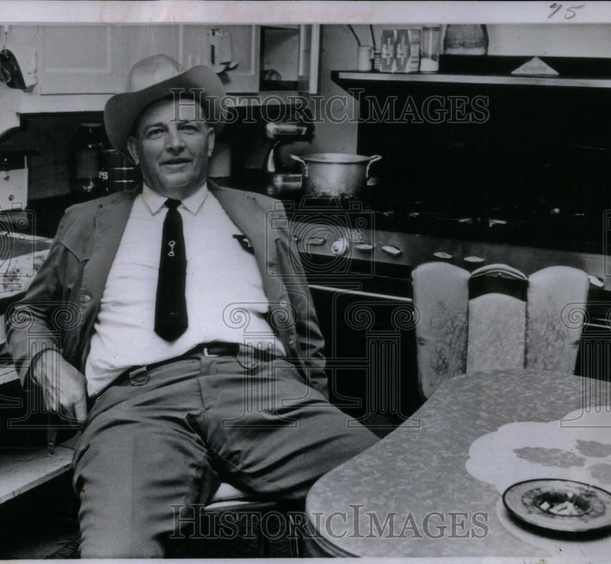 What we have here, ladies & gentlemen is a photo of Tex Watson's 2nd cousin, Sheriff Tom Montgomery, who happened to have been in the unfortunate position of being related to Watson, and was the one who placed the piece of shit under arrest in Texas. Of course, he probably used fur-lined cuffs, so the "boy" wouldn't bruise his wrists & all. Sheriff Montgomery just thought the world of his "relation"and allowed the mother of Satan to take her son daily meals and other luxuries. Here is what he had to say about Tex Lucifer during his jail time in Texas:


"You know, I'm the boy's second cousin. His mother's daddy was my daddy's brother. But I don't think they ever established that Charles was in the Tate house-or that other place either. And this boy was raised in the church house. Why, his mother & daddy are the finest people you'll ever meet. It's awfully hard for people around here to think he could ever have done the stuff he's been accused of doing."

Okay, let me go barf now. Why were they always calling him a "boy?" He was a freakin hairy-legged 24 year old already? Tex would call himself that too. He says in interviews "I was just an innocent Texas boy being corrupted by Charlie & the girls!" What a bunch of horseshit! Tex was a bunch of different things even before he met up with Manson, including a drug peddler, a wimp, a mama's boy, a thief, a liar, a pervert, and an extreme scum bag. A freakin boy? Are you kidding me? I'm surprised his mother didn't wipe his ass when she made her daily visits to the Collin County jail. I mean, come on. Does this look like the face of an innocent Texas boy? 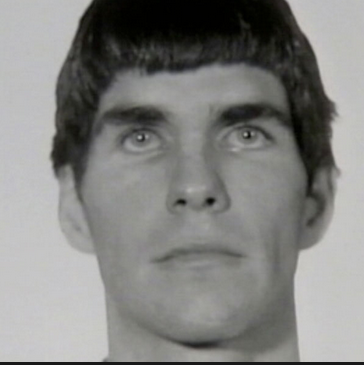 A boy's best friend is his mother!

YES Ann, but doesn't dominant "churchee, mommy" explain it all ?

"Good old boy" is merely a Texan phrase of endearment. AND a 24 year "boy" is NOT out of the ordinary in the Lone Star State.

Of course, Arkansas can give you a whole other issue to deal with.

Sometimes the word "psychopath" just doesn't seem to be adequate, so WHY do the rest of us put -up with ALL this shit ?

Mr. Hendrickson, I can assure you, nobody in my family has ever called a grown man a "boy!" Rednecks are the only ones who we call "good ol boys." Tex is from Northeast Texas though and it is a whole other world up there. The people up there are very, very religious for the most part and are a lot different than most other parts. We're originally from the Southeastern part near the Louisiana border, which is a lot more laid-back. Texas is an extremely diverse place. Different regions have different type people. Hell, Austin, where I am at is probably 95% California now.

You have a way with words Ann. I always enjoy your posts.

YES, YES Ann: We've got the SAME book, but we are on different pages. I spent 1965 - 1967 at Fort Hood, Texas. AND traveled the state from Austin to Dallas. We are going to KEEP sending YOU Californians until we can quietly slip GOV) Jerry Brown IN. He will convert YOUR "Good Old Boy" Rednecks into nice little "Socialists" - almost overnight.

Then, HE will feed all YOUR "psychopath" TEX Watsons a strict diet of Mrs Obama's favorite recipe: Corn husks, sprinkled with dried Crow shit, sautayed in Frog piss.

Huckleberry Jerry will also provide FREE re-training for ALL your "local" SHERIFFS - so they know the difference between their GUN and a WEAPON.

I love TEXAS - most of MY biological Family lives there - AND J Lennon's "IMAGINE" is banned from public performance there.

AND when Polanski is finally extradited back to LA, the Prosecutor is going to ask for a change of venue, straight to Austin, Texas. Maybe the "Good old MEN" will give HIM a "Good old FAIR trial."

Remember ANN - it's ALL just entertainment !

No way we're gonna turn this state into a socialist government. No way. Austin, maybe, but not anywhere else. At least I hope not, but nothing surprises me anymore.

Sorry Ann: YOUR own LBJ paved the Yellow Brick Road right to Texas for HIS "Great Society."

I hear people here say: IF it gets too BAD I can always go to Austin, Texas.

So what EXACTLY is better there ? Are they still "teaching" capitalism in your schools ? Cause that's so 1990s !

Here, the kids get FREE lunch and BREAKFAST. What are you folks serving ? Appetizers in between ALSO ?

Your money goes a long way here in Texas, and we have a little bit of everything. Austin has the hippies, Dallas has the yuppies, Fort Worth has the cowboys you thought you'd find in Dallas, San Antonio has a riverwalk, Houston is just plain hot, and if you are looking for rednecks, well then, you have just about the rest of the state to find them.

Everyone wants to invade Austin though. It used to be a nice place, but now you have to deal with obnoxious crowds, hideous traffic, overdevelopment of once beautiful lands, increase in crime and everything else a big, ugly city has. Too many people is never a good thing.

Thanks Ann and Ceilo: Austin is significant in many ways. When I was there in the mid-sixties it was a sleepy hollow City, but it had most everything, including sophistication & a special kind of class. I remember coming out of a movie theater on main street ( after seeing Whos a afraid of Virginia Wolf ) and as I walked along I thought: "This is a place where I could live in peace and be happy."

Apparently the word got out and about 15 years ago the WORD was spreading in LA. My brother in law actually made a trip to there to check it out. Just the other day, my son mentioned HE could go to "Austin" and live like a king, instead of NOT being able to even afford an old used home in LA. (average 2000 sf - $500,000)

I know nobody likes the DIRTY word (politics) but it is that simple. They MADE Austin attractive (NO state income tax) etc,
and the California politicians made it more necessary for "middle-class" folks to leave for places like Austin. AND "race" is playing a huge part. Here, the practice of "peonage" is in full bloom. The politicians are actually "pushing" Blacks and Mexicans out of California and especially LA. A one bedroom apartment in a middle-class neighborhood is $800 - 1200 a month. A traffic ticket is $400- 500. In LA you have to now PAY 10 cents for a "paper bag" to carry your food from the market. AND the "government" gets the whole fuck'in 10 cents. Most of us can afford the 10 cents, BUT when you try to carry just a couple of items to your car, without a bag, and a bottle of soda falls to the ground - I'm afraid the next time I hear of a California politician getting wacked - I'll die LAUGHING.

So what does ALL this have to do with Austin ? Imagine "the Family" is just a swell community of fun-loving hippies, UNTIL one day a Charles Watson type joins the scene.

Texas is significant in many ways. Manson got busted in Laredo, which is a border town way back in the 50's, also I have reason to believe a significant old ex -family member is a resident of Texas, actually extremely close to where I live. I don't wish to expose him or her and I won't reveal his/her name, but this person is here and probably is living a pretty low key life in peace. Mr. H, the Austin that you spoke about is gone. Now you deal with higher rents, lines & crowds everywhere, rude ass people, road rage, pollution, ugly subdivisions everywhere and people that want to change it into the West coast. Attitudes, plastic surgery-duck lips everywhere and nasal accents are everywhere. My dad was up here at his first semester in the summer of 1966, then he went to Vietnam as a pilot.

what a waste tex being in prison, he's hung like a horse and had a great motion of a ocean skill