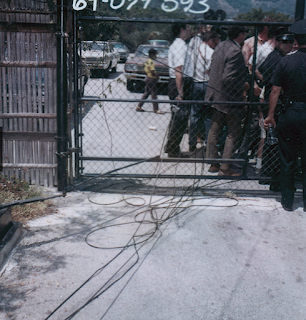 I imagine the kid had a good story to tell on the first day of school.

Did he drop his glasses?

I would love to ask that kid, who, if still alive is a man....WHY the hell he was wandering around outside the gate of one of the most brutal crime scenes in California. Yeah, most folks don't give a shit, but, alas, I do....

I think Matt's on the right track :-) Best laugh of the day for sure.

No doubt, it’s likely one of the ambulance chasers children. My dad was a fire captain and had a Motorola that he’d respond to. And if I was in the car with him, I’d be there at an accident scene or housefire etc. I loved going along and grew up wanting to be a fireman.

Also likely a neighbor kid who’s parents told him to “go see what all that fuss is about” or similar. People forget that in those days, kids were sent outside for the day.

I'd rather not say.

I agree with Astro I would think he would be a neighbor or came along with one of the reporters or other professional, although I wouldn't think they would have told him to wait in the car. To me he looks African American or dark complexioned. It is an interesting question Ann. It could be beyond the skills of even Deb, David or other top notch researcher to find out.

I always assumed he was the boy next door that called the police for Mrs. Chapman.

beauders said:
"I always assumed he was the boy next door that called the police for Mrs. Chapman."
I looked in Helter Skelter and the boy who called police for Mrs. Chapman was Jim Asin and here's a photo of him.
http://murderpedia.org/male.M/m/manson-charles-photos-18.htm
He was 15 at the time of the murders and was warming up the car and was scheduled to go to a job.
The first house she had gone to was the next door neighbors, the Kotts, but they apparently weren't home. Here is an interview with Seymour Kott: https://www.youtube.com/watch?v=7_dVgXRmb7E I don't know if they had kids.

The boy I think was following coroner Noguchi at one point in the film. According to Helter Skelter Noguchi's assistant arrived at 1:45 pm. and Noguchi later.

I sort of think it was a reporter's kid who was probably told to stay in the car, but obviously didn't. In the video, he's just walking around aimlessly. No parents in sight. He looked pretty little, too. Weird!

These are the types of posts that I love about this site. In a million years, I’d never have come across A). the imbedded video B). Seen the imbedded video C). Thought about the little kid milling around outside the gate while I watched the video.

I’m not here to challenge the motive or solve the crime. It’s little gems like this that keep me coming back.

AustinAnn74 is correct about this. LAPD probably had a unit at the bottom of Cielo Drive to keep out lookees and strangers, so people were probably not randomly walking up to 10050 to see what was going on. The boy probably was a relative of one of the reporters.

Is that the neighbor's house the boy is walking near? The Kotts?

AstroCreep, it's funny you should say that, because, as you notice, these types of posts don't get as much feedback as the same old argument about drug deals, Helter Skelter & bikers. It doesn't fit into the overall theme of the crime, or the mystery/motive behind the crime, so it doesn't peak anyone's attention as much. Me, well, I sometimes think the little things in this horrible case is what is interesting. Boring, I suppose, but interesting to me, at least...Thank you..

AustinAnn74 said:
...these types of posts don't get as much feedback as the same old argument about drug deals, Helter Skelter & bikers.

I think it's also because it's difficult to come up with anything to say in response. Because it's never been noted before (well spotted by the way), there's absolutely nothing known about the kid or why he was there. As you say- "we'll never know". Personally though, I found it really interesting. Unbelievable that a kid could be allowed to wander around a murder scene. Very different times.

Almost every aspect of this case is interesting. I had not seen this video before. If this kid is still alive, and chances are he is, he'd probably be amazed that he is the topic of a post on this blog. He'd maybe identify himself. But then we'd have our doubts. Great post, AustinAnn.

Tim A, there would probably be some conspiracy theories that the little kid is the one that planted Tex’s fingerprint after the drug burn went down- paid off by Lotsapapa to frame Tex all to get one of his Black Panther buddies out of jail on some murder rap. Linda, the mastermind, was carrying Lotsapapa’s child and agreed to help frame the peaceful and loving Manson family in exchange for mescaline for life. William Garretson and Linda are the ones that butchered everyone. You just believe everything the lying Bugliosi says and follow the establishment if you can’t see beyond the Helter Skelter lie.

Damn, AstroCreep....you're onto something!! The kid, indeed was a Black Panther spy, sent to plant evidence to frame poor Charlie. That latest UNBIASED Reelz documentary should've at least telephone interviewed the kid admitting that!!

I think that's it right there. It's so irrelevant and lacking in anything remotely interesting that my brain isn't going to be launched into any kind of action trying to work out who some stray kid hanging about might or might not have been. With no supporting detail on which to hang any kind of speculation and no clear shot of a face, it's like trying to work out what size shoe the priest was wearing.
Even today, a kid sees a camera on the street, they gravitate. How much more so in '69 ?

First time I completely disagree with Grim.
To me it's much more than remotely interesting and it's relevant to me. And I disagree with anyone who thinks there's no way to know who the boy was. It could be easy for someone to find out if they wanted to put some work in.
Based on Jim Asin's photo when he was 16, my guess would be if he had a younger brother that could have been him. I know he had a step mom and step sister. Jim Asin is reachable online.

Some things aren’t meant to provoke your brain to launch into action, Grim. Similarly, hearing about some drug burn theory (again and again) doesn’t stimulate my brain either and I don’t feel the need to write for hours to dispel the theories.

I don’t think that pointing out something curious in a video taken less than 12 hours after the murders happened, at the murder scene, is irrelevant at all.

Maybe you’ve seen the video and it’s old news. For me, it was more interesting than many others posts I’ve read and also brings a perspective that I hadn’t necessarily thought about. The neighbors, the curious onlookers, the people carrying out the pets, etc.

Ain't that the truth, AstroCreep!

Some things aren’t meant to provoke your brain to launch into action, Grim

How something is meant is no arbiter as to how it will be taken by each individual. Different things will spark off different trains of thought. That's what's a real plus in a public forum, even though there's the risk that things can get a bit unwieldy at times.

Similarly, hearing about some drug burn theory (again and again) doesn’t stimulate my brain either and I don’t feel the need to write for hours to dispel the theories

The key there is "again and again" and I agree.

I don’t think that pointing out something curious in a video taken less than 12 hours after the murders happened, at the murder scene, is irrelevant at all

I wasn't speaking as a representative of all humanity. I was speaking for me.
In any case, I was responding to brownrice's point that it was difficult to come up with any response and even Anne concluded that it was boring to most people and futile to us all which was accounting for not many responses.

Nope, had never seen it and it wasn't old news, just irrelevant.
Maybe it's because in so many clips I've seen of a murder or robbery scene where there is a reporter, there has been a crowd of people and one will see kids and older people milling around and only in one instance as far as I can recall, has one of the crowd ever had anything to do with what happened.
Mind you, he turned out to be the murderer !

When i was that kids age I headed straight for sirens, flashing lights, police, ambulance, fire trucks, garbage trucks, paving trucks, snow plows and any construction going on anywhere I saw it. Its a kid thing, nothing more.

The child may have been allowed in accidentally, with all the confusion, with each adult there just assuming he was there with someone else amongst the crowd. Or, in trying to get there fast someone literally did bring their child along, but that does seem far fetched. Yet no one expected this to happen, and maybe the parent {perhaps a reporter or someone else inside the gate} just brought him so they could there quickly rather than dropping the kid off with a babysitter or relative.