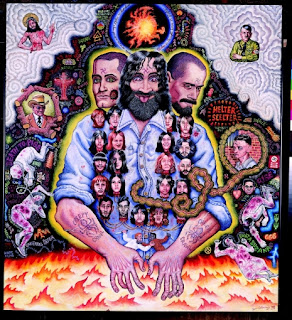 Facebook might've said farewell to Nik Schreck's group today. Five years of research and literature vanished into thin air. The group housed scanned documents that will be impossible for noobs to find, several pdfs of books no longer in print, and other easily accessed study aides.

Facebook runs their own show and I get it, but I hope group admins were allowed to remove their files before the lights went out.

The behind the scenes bs in this world is awful, and I don't necessarily agree with the Schrekians on everything Manson, but I know a ton of work went into that group. I feel for the people who busted their butts there for half a decade. May you rise from Zuckerberg's ashes.

Unfuckingbelievable. I don't want to state publicly what I think should be done to the person or person(s) responsible for this atrocity, but one can perhaps get an idea of where I'm leaning by checking out certain crime scene photos taken approximately 52 years ago in certain upscale neighborhoods of los angeles, california.

Nik Schreck? Who is that? I've never heard of him or the Facebook group

Lord, I am not worthy to join the hidden super secret Manson Facebook page, but only say the word and I shall be healed.

No salads for me but please add the Greene.

Schreck set up a forum in case the group got deleted but I lost the link. Anyone have it?

A lot of work in there and a lot of documents and books that are vital to anyone with a curiosity for this case, no matter how interested one may be. I believe it is all there at the mansonmafia link listed above. I wonder if the decision to close that page was based on the subject or the fact that a lot of copyrighted work was available for free.

Hi, I don't know if I posted these sets of interviews or not as a comment on a different post, so here they are (again, maybe):

Schrek is the man, very well versed, be careful fam. I noticed this site was down over the weekend, let's hope it stays up. Be easy