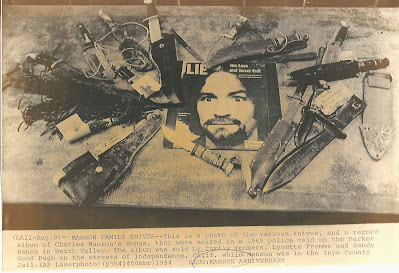 Ages ago I posted the above press photo of the Manson Family knives. There was a little discussion in the comments about when the photo was taken with Cielodrive commenting that the LIE album wasn't released until March of 1970. The photo ran in newspapers in 1984 on an anniversary for the TLB murders.

The caption says that the knives were confiscated in the Barker Raids. It is obviously a staged photo. 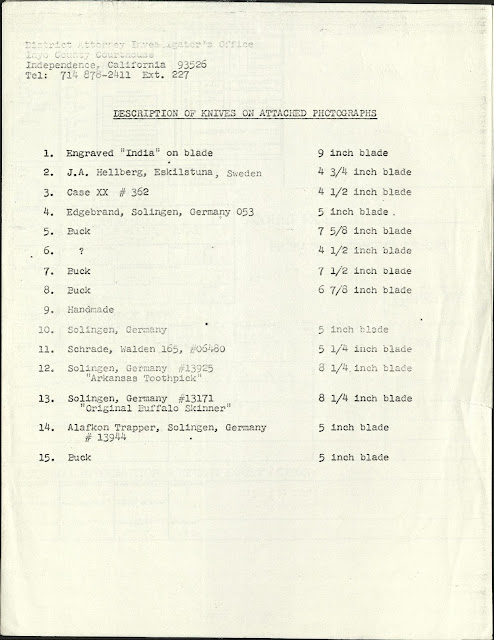 Deb, THANKS!!!
I think I wore Bo's patience thin on this one while I sat in Independence being ignored by the Inyo DA.
This is a big piece of the puzzle for me. I am so glad for you and Bo. The way you inquire and process logic appeals to me. Bo has ALL the goods. The combination is so nice.
Y'all made my day.
DR

I'm glad I could help you out!

Looking at the group of knives in the photo here, I would say there are some rather formidable weapons present. I am reminded that Tex remarked on the Tate night that the knives provided were rather insufficient for the killers. Tex wanted better weapons on the LaBianca night. Yet Patricia and Leslie rummaged through the LaBianca kitchen to find knives to use.

Makes me wonder if any of the above knives were even available on August 8.

Somewhere, I got the idea that Charlie got his hands on a number of folding Buck knives and issued them to his killers before sending them out to do their work.
Wasn't it a knife like that that Sadie lost at the Tate house?
https://rb.gy/xwpa3i

The Buck Folding Hunter was a very popular knife back in those days for anyone who wanted to carry a knife. I think it still sells well. The knife Susan left behind looks like the Folding Hunter.

Thanks, Deb. I had a couple of cheap copies of that knife in the seventies. Even those copies, were good knives.

Interesting isn't it that Linda Kasabian had her very own Buck Knife that she took when she stole the $5,000 and 60+ tabs of LSD.