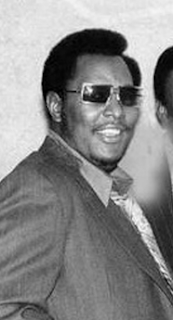 In an effort to find out what happened to Bernard Crowe after he was arrested on forgery charges and then testified in the penalty phase at Manson's trial, I sent for any court documents that the Los Angeles Superior Court might have on Crowe.

I wanted to know if Crowe was given immunity on the forgery charges for his testimony at the trial or if he served time for the crime. Los Angeles Superior Court has a terrible archival system. Not only is it very expensive, it also is lacking in organization and completeness.

I received two different court cases, both in the 1980's. They did not have the 1970 forgery case. The 1981 case documents are not complete. The 1986 case seems to be complete though.

Crowe was not a nice person. He referenced how many times he had been arrested as a youth, it was a lot times!. He told the judge he didn't have any parents but he did have parents, his father was a minister. He had been a heroin addict. The 1981 case had to do with assault with great bodily harm, he shot someone in the hip. The judge told him "It just appears Mr. Crowe that you are a menace to society." Crowe was affronted by that characterization!

It would be interesting to see Crowe's arrest record post-TLB to see how much time he actually did for all his offenses. Did he manage to leverage what he knew about Manson into lighter sentences or charges being dropped?

Wasn't Crowe incarcerated with Tex at one point? I'm sure I heard that somewhere....

Did Sanders or any LA-area reporters ever try to interview this guy and find out any further details regarding his connection to Manson or Manson's associates? I'm pretty sure Crowe would've responded with something like "no comment", but I'd still like to know for certain if any journalists made the attempt.

Yes, Crowe was interviewed by the press after he gave his testimony in the penalty phase of the TLB trial. Here's a link to the YouTube of that interview.

So did he ever go to Vacaville? If so, same time as Manson? Nothing much is ever discussed about the fam's interaction in prison. I believe all the girls were sent to the same joint. With all the members, sure some spent time together, wonder how close they stayed.

I did some additional reading on Crowe at the following link.
https://thissicklife.blogspot.com/2014/05/who-is-bernard-crowe.html

The eleventh paragraph down, the one beginning with "T.J" tells how Charlie took a buckskin jacket from Crowe's companion and at the end explains that this was the buck skin fringed jacket Charlie wore when he was arrested. I had the opinion that Charlie's buck skin jacket and pants were sewn for him by Victor Wild/Brother Ely from some hides that had come Charlie's way and the girls had difficulty sewing. Was it really a jacket taken from Crowe's pal that Charlie was arrested wearing, during his final moments of freedom. Were the outfits sewn by Victor Wild different ones entirety?

orwhut, I think your impression is correct. Wild did make a set of buckskin leathers for Manson and that is what he was wearing in the mug shots taken in Inyo County. The pants and shirt were matching.

I don't know for sure but I think the shirt/jacket taken from Crowe's alleged body guard would have been too big for Manson. Manson was a small guy, he didn't have a lot of upper body bulk. You can tell by the mug shots taken in Inyo that the buckskin outfit fit him well and there were few men that could have fit into that outfit.

Starviego and Chrisonthecape I can't answer your questions. The reason I sent for the documents was to try to learn whether or not Crowe did any time for the forgery charges. The Superior Court archive did not seem to have the documents I was looking for and I got what I could. If you read the documents, you know as much as I know. Those 16 pages cost me $85 which is unbelievably expensive, I couldn't afford to press them further to search for more documents. Most courts charge fifty cents per page for documents and a $15 to $25 research fee.

Hi Deb S. Do you have a way we could chip in for expenses?

Thank you Deb. I asked the same question, more gently worded, of the blog where the information appeared and haven't gotten a response.

Still no reply from thisscklife.

Still no reply from thisscklife.

Don't hold your breath. The post you reference is from 2014, and the last time the blogger responded to anyone was 2018. And checking out some of her other posts, she seems pretty clueless anyways.

Molly wrote: “Hi Deb S. Do you have a way we could chip in for expenses?”

Same question! I’m a researcher in another area, and I appreciate your good work very much!

Deb, have you considered creating an account with buymeacoffee.com for donations?

Gorodish,
It does look like I'd remember to check the dates on these posts.
Thank you,
Whut

Medium Patty - That is exactly the sort of thing I was thinking of.