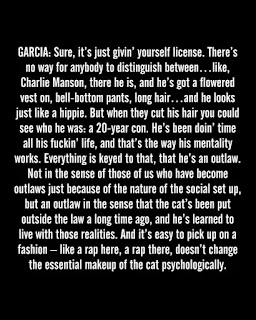 So long Jerry, you were basically a good guy.
I remember seeing the 'dead' posters in head shops and hearing fans of the Dead talking about concerts and what have you.
I didn't listen much to the band, though in later years, I came to see that the fans that followed the Dead concerts were almost a sort of a, what I would call a 'groupy cult.' Sort of like the fanatics that debated and looked up to the 'who's the best guitarist...' blah blah. There is no best guitarist, anymore than there is the best song or book. I think.
Looking at Jerry's pictures, almost always smiling, the first thing I thought of, back in 'the days,' is: another guy I know I'd really enjoy having a couple drinks or pot of coffee with.
As with Frank Zappa, Jerry had some pretty interesting things to say.
Jerry also angered some, many actually, when he said-"rap ain't music...sorry it just ain't."
As for his take on Brother Charlie (Manson, of the Tate/LaBianca criminal cases from the year of 1969 and of many enjoyable interviews later) Charlie actually said that he, Charlie (not our friend the good guy in Britain, his Royal Highness Prince Charlie) was an "outlaw, man..." and "look what you all did to me."
-kicked me set me on fire deprived me of my rights you threw the Constitution in the trash and denied my legal right to a fair trial and to legally represent myself...
Charlie was, of course, right about that. He should have been given the right to self consul and to call witnesses. Just as the lovely girl, unfairly judged, Sadie/Susan Atkins, was denied some rights, particularly the unjiust, hateful denial of earned freedom/parole.
Jerry was looking at Charlie from his perspective, Jerry's that is, as a fellow growing up in the American culture, in the 60s as an adult now and he looked around and he saw and read about the many aspects of this culture and the many crimes and weirdness, such as the war against Vietnam and...so on. And so on
Speaking of weirdness, what was up with, when I walked into a department store, a Penneys' in this case, years ago, and they had Grateful Dead ties! That's right, men's dress ties. Kids in Haight-Ashbury, Taos, Chatsworth/Spahn Ranch, communes here and there, the phonies at Altamont, Woodstock, Monterrey looked gor high and listened. Many died, many were fooled by the rock stars, most of whom were anre a holes, as the bands played and socked tens of millions away and they wouldn't have a soda pop with any of these fans and they always looked down at them and made fun of their fans, i know, I heard some. Jerry was a good, honest guy with a good heart.
Know what I mean? Yes you do thanks

brownrice, I recently read a Jerry quote that reinforces your point. It was about Owsley Stanley:

The man had an amazing mind and ability for putting together an epic sound system too...not just a one trick pony...er, Bear

@Fayez Abadaziz so basically, you know nothing about the Dead, Deadheads or Jerry himself.

Matt said: brownrice, I recently read a Jerry quote that reinforces your point. It was about Owsley Stanley:

:-) That's actually one of my favourite quotes of all time about Bear, Matt. Garcia also described him once as "a difficult cat at best" (said with much affection) which was also true. As Doug said though "an amazing mind". He was certainly one of the most interesting and intelligent people I ever came across.

"Heroin takes away all of the problems you have in life and replaces them with just one: where to get your next fix."

Does anyone know the name of a coming of age film where one awestruck young man points out Owsley to another and explains his "work" with LSD? The setting was the build-up to a concert possibly Woodstock. I've been trying to remember that movie for years.

gina said...
@Fayez Abadaziz so basically, you know nothing about the Dead, Deadheads or Jerry himself.

deprived me of my rights you threw the Constitution in the trash and denied my legal right to a fair trial and to legally represent myself...
Charlie was, of course, right about that

Charles Manson said a lot of things that were insightful and true....when it came to the failings of society and what was wrong with it. But interestingly, he rarely applied that recognition of wrongdoing to himself.
And he most certainly was not right about being denied his legal rights. The irony will always be that it was him exercising his legal rights to the limit and basically abusing them, that eventually led to him not being allowed to represent himself.

He should have been given the right to self counsel

But Fayez, are you cognizant with what actually happened before and during the trial ? I mean, are you ? Because you have to ignore a whole lotta reality to hold the view you do. Now, I've said for years that I think the judge should have given him one more final stiff warning and let him carry on hanging himself with his legal rope. But it's not correct to say he was denied his legal right.
He had that right granted by a judge in 1969 and it was his behaviour that got it taken away because the judge felt that after 3 months of putting up with Charlie's stupid motions in court, that to allow a man facing the possibility of a death sentence that acted as Manson did, to represent himself, was going to be a serious miscarriage of justice. And in many ways he was right.

and to call witnesses

He could have called any witness that he wanted. There was nothing preventing him from calling any witnesses. He and his team chose not to.
And then in the penalty phase, they did.

Yeah, Gary Hinman, Wojciech Frykowski and Sharon Tate all saw the lovely side of her and probably thought 'what a sweet, unfairly judged assistant in murder !"

was denied some rights, particularly the unjust, hateful denial of earned freedom/parole

Parole isn't really something that a prisoner earns. It is something the state grants, pending certain conditions.
There's a difference.
And going before a parole board and saying "I didn't stab Sharon Tate" when the court record states that she was adjudged to have done so automatically nixes her chances. Susan was always going to be in the soup. Even if she hadn't stabbed Sharon, because she went on record in court as saying she did, that left her in an almost impossible position and it made the parole board's job easier than it would have been for say, a LVH parole board.

Thanks Matt for the Jerry quote. I don't think I knew that one. I read some of that interview last night and was amused to see it was conducted on an airline and it's noted when stewardess comes by with coffee etc.
It's interesting that the Grateful Dead had just released Casey Jones and Garcia was already expressing regret for influencing more people to do cocaine, even though that wasn't the song's intent.
Also, talking about Neal Cassady how he was the most amazing person he'd ever known and his raps were in twelve dimensions etc. I've seen some of the footage of Cassady doing his thing and he obviously was a lot of fun, but my impression is that he was a speed addict. Why is that okay and not cocaine? Seems at least as harmful. What I heard of his rap didn't seem multidimensional to me. Would be interested to hear others' thoughts. Was also imagining what an interaction between Manson and Neal Cassady would have been like. What if Cassady got to drive the Black Bus for a stint.
Garcia appears in a Hell's Angels documentary and when interviewer asks if he's afraid of the Angles he says: Sure. The Angels are really good in all the violent spaces.