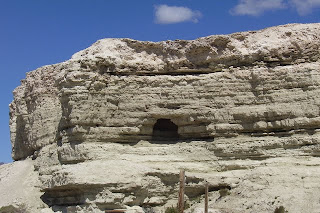 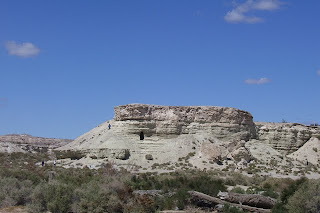 Hi Grump! I could almost throw a pebble into your back yard from where I am right now...not really, but close...

Is the THE cave they stayed in? How did you figure out which one it was? I ask because I'm always interested in new research techniques. ;)

There are too many caves to tell really. A lot of them are caved in too. There are some behind the post office also (next to the graveyard). I don't remember the name right now, but the place Paul, Paul and Brooks worked at (it is named in little Paul's book) is still around too.

The sheriff of Shoshone came to the cave that Paul. Brooks and Crockett lived in and told them not to go near Barkers that week because he was going to raid the area. It always struck me as funny how the sheriff knew exactly which cave they lived in. I guess the caves had addresses like an apartment complex. The caves probably had cable tv and a pool too. Not even The Flintstones and Bedrock had the modern conveniences of the Shoshone Caves.