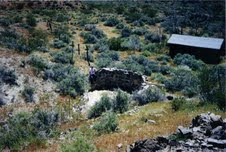 Pool at Barker Ranch
As the end of summer has arrived we here at Eviliz are holding a raffle to win THE ultimate "First Annual Eviliz Nude End of Summer Pool Party." All expenses paid for by us. Well, as long as Matt has not run his hands through the petty cash drawer again.

Eviiz Inc. will be providing all the necessary fixins for a kick ass party. A few kegs of beer, some cheap boxed wine, weed, LSD, hot dogs, hamburgers and of course for our vegan friends, veggie burgers.

Yes you may bring your significant others, children, immediate family, friends and dogs.
Bring an instrument so we can all jam out around the fire at night. Patty and Eviliz have invested in mandolin lessons for the occasion. We also ask that everyone bring one blunt wrap, and one side dish or dessert.


There can only be one winner but almost everyone from the blog is invited. Watch your snail mail for the invitation. If you don't receive your invite by September 16th, it means we don't like you, but tolerate your presence.

The winner will be given the choice of two locations for the shindig. Barker Ranch or Myers Ranch.
Remember it is a nude pool party. Ken our paparazzi will be trying out his newest digital camera. Which means, photos will be taken. Make sure your "downstairs" is in picture taking order.
And as always, there is a catch.

Grump,
I like the pix. If you have any more of Myers Ranch, I sure would appreciate seeing them.

F*ck it. If invited, I'm gonna buck the trend and bring Sandy along.

I'm bound to piss her off, especially as I'll be driving us in my custom dune-buggy, powered by gallons of sap from freshly felled Giant Redwoods.

Oh God Ken, that new avatar is too much...you are cracking Patty up.

Patty hopes that Snake will take her up on an invite so we can talk about how we went to the same University, albeit about 15-20 years apart. You wanna talk about pool parties...we had some doozies in our day!

Matt will be there with Little Patty. She was bad ass! The Mattster likes bad-ass biker chicks with no conscience!

The most recent Myers pictures I have are from after the 1999 fire. I'll send them to Liz and she if she feels they are worth posting.

The rebuilt structure there is awesome! I saw it a few years ago, but no pictures:(

I'll get some pictures of it in the spring.

Can I come if I named one of my children after a family member?

That should count for something, Stacey. Is she old enough to pour the martinis?

Stacey L. said...
Can I come if I named one of my children after a family member?

I don't think it would be a party without Lady Dangerous and the Monfort boys. But we would have to get Liz one of those 100 foot high lifeguard stands to sit on and all of Lottsapoppa's decendants to sit at the base and guard her Evilness.

OK ladies, which one of you is going to bring Donkey Dick?

Can ya postpone this hootenanny 'til March 2012 after Charles gets parolled?

I think bringing CM would get you into the party, Ace. I'd be impressed...

Charles on parole would certainly prove the Mayans correct. Or is it the Aztecs? I get my football teams mixed up.

Ruth and I will be there with Honolulu hamburgers and everyones favorite party game, Russian Roulette!

I'll send them to Liz and she if she feels they are worth posting.

Grump,
Thank you very much. I haven't seen very many photos of Barker Ranch.

I guess that leaves me to round up Red and drag her out there. But, I don't think she'll want to go ;)

hmmm... might have to dig up some Orange Sunshine and swim to America...

'fraid so, Ken. Either Pat or Mother Mary.

Life's a bitch sometimes, ain't it?

Take one for the team Ken.

Gov Brown can be unpredictable at times and the state is under a court order to discharge prisoners and not to let politics interfere. So who knows CM may have a shot this time.

Alright, I'll take one for the team. I'm going to show up with a razor in hand, but somebody else is going to have to shave her!

Don't forget her back.

Ken619 said...
Alright, I'll take one for the team. I'm going to show up with a razor in hand, but somebody else is going to have to shave her!

adam said...
OK ladies, which one of you is going to bring Donkey Dick?
Patty is but she doesn't want her husband to know.
shhhh

DD's D will look like a used up gold crayon next to Mr. Patty's frighteningly enormous manhood!

Who's going to guard the buffet from fatty Hoyt?

P.S. Ken, it might be a good idea to keep Pat from the steak knives.

Ok, that made me laugh.

As long as Matt is shaving her, I'll show up. I'm going to need more than just a couple of paper bags though. And....if I even THINK someone is laughing at me, I'm going to sic her on them!

Am I the only one who thinks that Pat was (just about)passable back in the day?

Always seemed that Charlie's big thing was making the girls with a bad self-image like Pat feel really beautiful, and that bonded them to him. Especially the early recruits - Mary, Lynette & Pat.

A standard pimping ploy, I guess. But Charlie's pursuit of a record deal made it more useful to have a harem instead of have the gals turning tricks on the street.

The girls who know they're conventionally attractive smile for the camera more. Pat was generally a non-smiler.