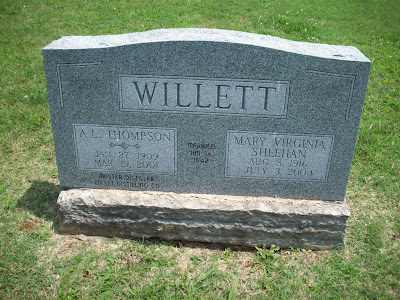 Above: headstone of James Willett's parents in Bardstown, Kentucky
Readers: we are coming to the end of our exploration of the murder of James Willett in Guerneville. We saw where his body may have been found, and where it was initially taken to be identified and prepared for burial. James Willett is most certainly dead. Today, however, he lives on in the person of Heidi, who we understand reads the blogs. We wish her the best. This last article pulled from the Press Democrat deals with what became of Heidi when she was not yet a year old:

STOCKTON, Calif. (UPI) - The tiny daughter of a nomadic young couple gunned down after joining a group of ex-cons and "Manson girls" has been claimed by her grandparents in XXXX.

George XXXX of XXXX, Conn., a general foreman at a plant in New Haven, and his wife, Vera, said Wednesday they would fly here later this week to take custody of eight-month-old Heidi Willett.

The youngster was found Sunday in a house where police discovered the body of her mother, Lauren Olmstead Willett, 19, in the basement and arrested two men and three women for her murder.

The child's father, Marine combat veteran James T. Willett, 26, was shot to death a month ago and buried near the town of Guerneville, 100 miles northewst of here.

Willett's father, distillery president A. Thompson Willett of Bardstown, Ky., sad he and his wife discussed their grand-daughter's future with Lauren's parents and decided the Connecticut couple should adopt her because they had a smaller family.

Willett said his son's lifestyle bordered on "being a hippie," while his daughter-in-law, whom he met once, was a "quiet" girl who ran away from home in a dispute over continuing in school.

Authorities said Mrs. Willett and her daughter apparetly accompanied the three men charged with her husband's death to Stockton after his slaying. They all lived here in a two-bedroom home with three girls invlved in the cult of mass murderer Charles Manson.


And that, dear readers is the end of our story: an oft-overlooked chapter in the history of The Family that is obscure enough by now that today's editor of the Press Democrat for Guerneville was informed of the incident by doing a standard internet search on her town and stumbling upon Eviliz.com earlier this week. James, you are gone, but you are not forgotten. Not here, not on our watch.
Eviliz replaced some names and addresses with "XXXX", out of respect that no one will bother the family of Lauren. If you remember, Heidi did contact us and post in the comments awhile back. She told us she is doing very well in life. We here wish her nothing but the best.

all the way through!

The murders of James and Lauren Willet are usually overlooked in discussions about the Manson family. It's good to see this young couple has not been forgotten.

Contrary to what some people may believe, Mr. Patty does have an identity of his own. He will be returning to Guerneville for a concert with his homies in about three weeks. If anyone can think up any loose ends, he has graciously agreed to tie them up for us. Anyone?

Great Job Patty!! Very appreciated by all I am sure.

Great work and very interesting. I wish Heidi the best as well.

Who were the other "Manson girls" that were there, besides Nancy Pitman? Why weren't these girls charged with murder? I am sure they knew about it, and even witnesses the actual murders. I never understood how they got away with this. Also, I never understood how that little bitch "Ouish" or whatever the hell her name is got away with lacing a hamburger with poison to try to kill Barbara. These bitches are living a completely normal life now, but they were involved in stealing lives away from others. Why did they get away with it? Also, why didn't they ever charge them with child abuse? They would feed those kids drugs, and even make them perform in their sex acts. There isn't a statute of limitations for child molestation in California, is there? I just don't understand why they got away with so much.

AustiAnn, I believe Priscilla Cooper, Nancy Pitman, Maria Alonzo and Squeaky were living in the house. I'd have to look it up to be sure.

Ouisch I believe actually did stay in jail for a few months but skipped bail. Even with a conviction, given her age and soforth she wouldn't have done any more time. Prosecuters didn't feel it was worth it to pursue her. She was just a kid.

Ruth Ann was finally arrested in Sacramento in late 1975 after Squeaky pointed a gun at President Ford. Ruth's address was there in Lynn and Sandy's apartment, so she got paid a visit by the Po Po. Patty thinks she read that Ruth Ann still had the "X" on her forehead at that time, but later had it surgically corrected.

I live in Bardstown ,Ky where James Willett was from .I know his family quite well . I do know that his sister Alice was under protection for awhile after the murders .The Willett family received death threats and numerous threatening phone calls .Everyone was so scared for a long time around here .Yours is the only site where I have found much info on James and Lauren .