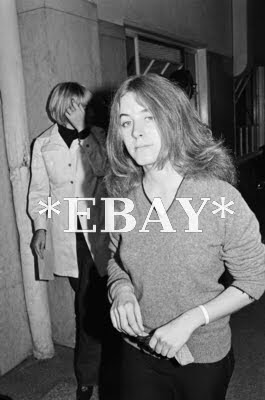 A good leave-in conditioner will take care of those split ends.

does anyone know what year this pic is from?

I was thinkin' this could be the poster child for "just say no to drugs".

You're looking at me all wrong. Do it again and I'll stab you in the face with a soldering iron.

She actually looks pretty fashionable if she would just get that hair thinned and cut. Maybe she's going for the Big Patty look. There are probably other grooming issues that we're not seeing here.

This photo was taken of Nancy after her arraignment for the arrest mentioned in the article below.

GIRL SUSPECTED OF TRYING TO SMUGGLE DRUGS TO MANSON

LOS ANGELES, Dec 28 - A girl follower of hippie leader Charles Manson was arrested here on suspicion of trying to smuggle drugs, concealed in two balloons, into his jail cell.

The girl, Brenda McCann, 19, was booked on suspicion of possessing dangerous drugs after she swallowed one balloon when her handbag as being searched at the entrance yesterday, police said.

They said she tried to grab a second balloon which a jail warden found, but failed. The balloon was confiscated.

Balloons are a common way of transporting drugs in southern California. Police said the second balloon had been handed over to the Narcotics Bureau for analysis.

Miss McCann was on her way to visit Manson, chief defendant In the Tate murder trial, when she was given the routine search. Manson and three of his female followers are on trial on charges of killing film actress Sharon Tate and six other people in August, l969.

Miss McCann, who gave her often-used alias of Nancy Pitman when arrested, recently persuaded her husband, Bruce Davis, 27, another Manson "family" member, to give himself up on a murder charge.

Davis was wanted on a charge of taking part in the torture killing of Los Angeles musician Gary Hinman in July last year.

Miss McCann was also wanted by police on a check forgery charge but was released as part of the Davis surrender deal.

Her arrest yesterday was the third drug incident involving the jailed Manson. Earlier this year police removed his rights to visits in an open room with his attorney after LSD was found on him.

Two weeks ago there were reports that marijuana and hack-saws had been found in his cell but police would neither confirm nor deny these.

I don't understand why everyone thought Nancy Pitman was such a beauty. I don't think she had an attrative face at all. Her body was small petite, but the face was fug. Don't get it.

Anyone noticed in the part of Cielodrive.com ,,Miss Brenda Mc Cann who also use the alias Nancy Pittman,, ?? Or 1 it is a writing fault by journalist...or 2 Nancy fooled them ?? Should be the other way around