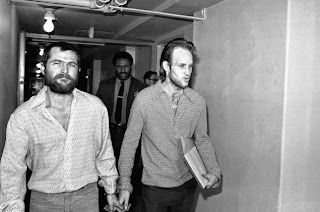 Article by: LINDA DEUTSCH , Associated Press
Updated: June 13, 2012 - 5:06 PM
Los Angeles County Deputy District Attorney Patrick Sequeira says Davis showed up for Wednesday's hearing in San Luis Obispo but said he didn't feel well.
He was examined at a clinic in the California Men's Colony and sent back, but still complained of illness and parole commissioners said it was necessary to postpone.
Davis is serving life sentences for two 1969 slayings, although he was not involved in the infamous murders by Manson followers of actress Sharon Tate and six others in Los Angeles.
A parole board determined in 2010 that he was ready for release but then-Gov. Arnold Schwarzenegger reversed the decision.
Wednesday would have been his 27th parole hearing.
THIS IS A BREAKING NEWS UPDATE. Check back soon for further information.

PS: like the photo? They appear to be holding hands. Priceless.

Yeah I noticed the fingerlock. Also Clem appears to be whistling a tune...

This is my first post here. I'm really happy to find you. I've been interested in this case since it happened, when I was 13. Anyway...
I drive by Bruce's "house" everyday on the way to work. I hope that he doesn't get released. As Doris said,"They should get parole when the dead get parole."
A post in our local paper refers to a "nest" of Manson family types here in Grover Beach. Other than his wife, I know of no other past/present followers. Anyone here have any info on that? Jenn

Other than inconveniencing Debra Tate and Barbara Hoyt, why would he want to delay his hearing by faking illness? What would be the advantage of doing this, for him? I don't know much about these hearings and their rules, but I have never heard of an inmate doing this. Either they show up for the hearing, or they don't. I don't get it. Someone explain this to me, please.

Very curious to see which commissioners were on the panel.

I'm with toocrowded. Why would he want to delay the hearing?

Something else I don't understand is how Debora Tate gets to go to Bruce's Parole hearing. Was Bruce convicted of anything to do with Sharon's murder.

Unknown, could you forward a link to that article to one of us? Our addresses are on the blog.

Victim's next-of-kin can now send a representative to the hearings.

At Tex's hearing last November a woman was there to read a opposition letter from Janet Parent.

Also, Debra Tate and Jay Sebring's nephew have shown up to one of Leslie's hearings to speak on behalf of the Smaldino
family.

Yesterday, Tate was going to be representing the Hinman family and Hoyt the Sheas.

I don't know if this is the article or not, but one of the comments states something similar to "The Manson Nest" comment.
I think its referring to Bruce's wife and kid, and the ministry he plans to be involved with if paroled.
http://www.sanluisobispo.com/2012/06/13/2103102/manson-family-member-seeks-parole.html

They are handcuffed together. It only appears that they are holding hands. Sweet thought, though...