Pics of Blue after being released from the pokey

From our German friends~ 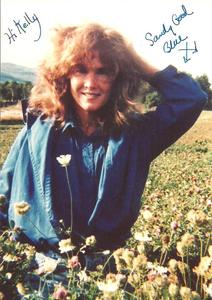 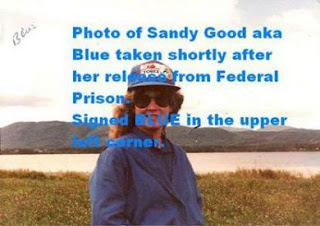 She was very pretty in middle age.

Were those her prison issued denims?
I like the pose with one hand behind her head. She seems to be getting her senior pictures taken. After all, she had just graduated from prison! :)

"The lunatic is on the grass"

I think Blue still looks awesome.
I also think Pink Floyd is one of my all time fav bands.

“Dispute not with her: she is lunatic.”


“A casual stroll through the lunatic asylum shows that faith does not prove anything.”

wonder what the downward arrows means to her?

Good question- I didn't notice that...

there does seem to be some sort of symbol???

gotta be some story behind that you would think....

And what's up with the goofy trucker hat?

candy and nuts said... wonder what the downward arrows means to her

Draw a circle around the crossed part and the Zodiac conspiracy people are off and running.

Woops, I left out ooo-eee-ooo.

I know that is an old photo, but for goodness sake, I hope this woman has gotten a hot oil treatment for her hair since then, or at least invested in a flat iron. That frizzy mop was almost as bad as Suzan Struthers, who, I might add was another freak with frizz.

Ann,
There is a video of Sandy with her hair so frizzy that by comparison, it look's straight in those pictures.

Sandra was older than the other family girls she was educated she could have prevented some of what happened within the family if not before the Tate murders than after.She said right on about the Tate murders when she found out.Her reason for the murders are insane.She is cruel she wasted her whole life what an angry bitch.Could not even bring up her own child now she is an old lady the facts are in WASTE.

Candy and nuts, I have noticed you take great offense if anyone says anything about any of the Manson Family women's looks. Why? Eviliz knows exactly what I look like. Ask her. I don't hear many complaints in the looks department! Your name shouldn't be Candy and nuts, it should be Hairy Nuts, named after the set you probably have growing between your legs! Do everyone a favor, keep the bag over your head if you ever go out of your basement. Also, take a break from Manson blogs every now & then, go get a pedicure, perhaps visit a gym every century or so. Oh, and make sure you, and your psychotic buddy, Sandra "Fuzz" Good invest in a flat iron! Thank you.

Ann and Candy,
You can fight it out later but, could you please help satisfy my curiosity first?
I take a special interest in Sandy because, I think she's one of the prettiest of the girls and have noticed that her hair often looks like it's had more care than that of any of the others. Is this because it's naturally frizzy and she has to spend time on it to keep it under control? I have very little hair of my own and am mostly ignorant on the subject.
Thanks,
Orwhut

No. It's because she's of bourgeois descent and even if their rhetoric was revolutionary, some of the bourgeois habitus stayed in their brains! ;-)

I guess, some of those big words would tend to friz a person's hair.:-)

I have frizzy hair...

when I was a teenager - I wanted to have long hair soooo bad!! I wanted the surfer look in the worst way. But when I let me hair grow it doesn't get long and straight- it curls and frizzes and I ended up looking like Greg Brady back in the day.

so I have always worn it short and neat in attempt to not look like a complete jackass....

which is not to say people with frizzy hair, or Greg Brady back in the day, look like jackasses..

but that my skinny little freckled face with that look certainly did...

My son's hair frizzed for a while reminding me of Lyle Lovett's. It doesn't do that any more so, I think it was caused by the wrong kind of shampoo. Personally, I'd just like to have some hair.

Sandra Good had her hair styled better than the other girls because she came frome upper class.

Cybot said... Sandra Good had her hair styled better than the other girls because she came frome upper class.

That was my first thought. Now that the friz thing has been pointed out, I'm beginning to think it might have played a large part.

Not the friz, but she behaved different than the others in general.

She flew in a private plane to the Family, she had her baby in a private clinic, she wanted to have her baby the 'legal' name Pugh not associated to the Family and her dress and haircut was better. And she almost got an academic career. ;-)

I guess you're right. Her makeup seems to be done better too.

But it's very tragic, that the life of her sister ended so early by drugs and alcohol. We do not have many pictures of Ginny Good.

The book of Gerard Jones is very interesting! It also contains a little information about Sandy.