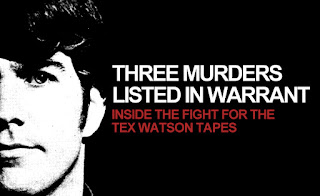 Read it on cielodrive.com

Stubbs & Tenerelli. Out of all the peripheral crimes The Family is suspect in, these are the two I've always felt the strongest about. Thst's why the 2012 Tour hit these spots early.

I wonder what, if any comments Sequeria will make about the recordings at Leslie's hearing on Wednesday. Also very curious about the sound quality of these tapes.

I agree with Matt; Stubbs and Tenerelli are very likley victims. However, even with an on-tape confession, they will never be able to convict for these. If they had enough evidence to do so, more would have been made about these crimes 44 years ago. I think it's almost a given Stubbs is a victim. Tenerelli could have been killed by an M person, but was it under M's order- maybe not. At this time there were so many people running with M and his people that you'd never be able to get the real story. Tex saying "yes, so and so killed him..." and now "so and so" is dead... that's pretty much it.

I am going to stay on record and say the tapes reveal nothing new.

Of course it will be way more interesting if I am wrong...

This picture of Tex makes him look Bundy-esque. Cielo, is this your graphic and if so, did that occur to you at all? Just curious.

I agree with those who feel that there will be no real new information on the tapes. But I sure would love to listen to his discussion and description of the events. I want to HEAR HIS ACTUAL VOICE in his taped statements regarding that summer, and of the murders he committed. Reading transcripts is not the same, for me.

Hi Patty, I definitely see the similarity but that wasn't my intention. That picture was used because it was from Tex's days in Texas while Boyd was fighting the extradition. That photo was taken in McKinney, Texas on February 16, 1970. This was the first press photo taken of Tex after he had been arrested for the Tate/LaBianca murders. Although he is obliviously not pictured, Bill Boyd is sitting to Tex's left.

i think tex looks fairly handsome in that photo, good enough to model. but what do I know, i'm a lesbian after all.

Yes I agree it's a very good photo of him. What a difference a haircut can make. This was taken less than year apart from his famed belladonna mug shot. Comparing the two, it's hard to believe it's the same person.

And boy did he look different again by the time he was finally extradited.

yes much better than his mr. spock after doing too much acid look.

The only thing these tapes have the potential to do is block paroles. Paroles that would have likely not happened anyway. In my personal opinion. ;)

From a practical standpoint Josh, I agree. But I want to know what happenned to Tenerelli & Stubbs - even if they are in no way related.

And johnny ussery's family, too.

I agree with you Matt. My hope was that somewhere on there Tex slips and mentions Shea. Then they prosecute him for it finally. That guy has gotten away with a lot over the years.

I sure hope they let detectives with brains and a knowledge of the events surrounding all of this to be the ones who listen to the tapes and not some young up and coming shamus who wouldn't understand the significance of any possible leads.

So really they should turn the tapes over to people like us.

We could have a brain trust assembled very easily to explain to them what they are hearing. We'd save them months of research instantly.