Debra Tate and the Oui article

This is the text of Debra Tate's Oui magazine debut.  Yep, aside from the one dozen photos, one being the centerfold, there are words amongst the photos!  This was published March 1977.

I know some wonder why so much scorn is heaped Debra's way.  This is just one example of her actions that have contributed to that scorn.  There is nothing demure or tasteful about the photos, nothing is left to the imagination. The timing of the publication couldn't have been worse either.  Leslie Van Houten's second trial began January 1977 just weeks before Debra's photo spread.  While Leslie was not being tried for the Cielo Drive murders those murders were back in the spotlight and undoubtedly Doris and Paul Tate were having an emotional time of it.

The piece was one long continuous paragraph, I split it up where I thought it was appropriate to make it easier to read. 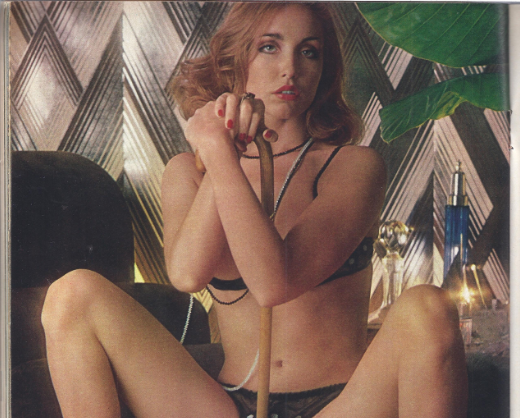 Men tell her she will grow out of these fur fancies and move on to the hard stuff: hairy chests.  Debra just smiles.  What does she really want, they ask.  Debra says mink. And high heels.  And cherry-red lipstick. But primarily mink.  Because it tickles when your naked.  Like a man.  Yes, her name is famed, and YES, SHE IS THE BABY SISTER OF SHARON TATE, THE LATE GREAT, [this part was capitalized in large print in the article] who helped raised Debra in the whirl of the Sunset Strip Sixties.  As you can see, Debra has come of age.

She has dealt with that which had to be dealt with.  She is not running after a movie career and has no interest in the sort of public life that Sharon lived.  Debra wants none of that.  She has her own concerns.  Secret concerns.  By day, she passes for just another spectacularly built California girl who races horses down the rolling verdure that leads to her beach house, body surfs in her front yard ocean and thinks happy thoughts: ermine-lined license plates; finding her inner peace in a sable.  But that's just the daytime.

In the early evening, she lolls around with the black sheep of Hollywood, a circuit of brothers, sisters and children of famous people.  They have quiet luaus by the pool.  They complain about est seminars.  Debra is soon bored.  She presses a button and the time lights up on her gold watch.  Deliverance is near, for after midnight, the leopard changes her spots and the fur fantasies begin in earnest.

Debra sneaks off to a gay disco with a pack of boys.  She wears her Black Diamonds mink over nothing. This is her comment on the Hollywood status scene: everything on the line:  price tags up front.  The dancers bop-ba-bop.  Debra takes her time.  Suddenly, as if by accident, she lets her mink fall open.  A tinsel star falls from the ceiling.  Somewhere a galaxy explodes.  One man drops his drink.  Debra blows him a kiss.  She takes a cigarette from her garter strap.  A man who identifies himself as a Milanese count turned movie producer lights it for her.  She is not fooled.  She exhales smoke into his eyes.

Spaghetti disaster-flicks indeed!  Her sister warned her about these lounge lizards.  Debra turns up her collar and leaves.  Fast, faster, fastest.  Her Lamborghini zips along the Pacific Palisades.  The steep, winding descent to the shore.  Off with the mink, on with the boa.  Debra wraps herself in it and wanders naked through her many windowed beach house.  ONLY THE SEA SEES WHAT SHE DOES WITH HER SERPENTINE LOVER.  [again this is capitalized in large print in the article]

The unconstricting boa slithers over her blushing landscape.  The sea waves.  Tonight Debra is angry.  Tonight she plays rough.  She drags her mink across the redwood floor, grinds her silver heels into it.  For this, she must later suffer the boa's flagellations.  (It's only a game.  No one is hurt.  Even the fur glistens afterwards.)

But then the phone rings.  Oh, no, it's the spaghetti man!  He wants to make Debra a star.  But she will have nothing to do with this projected epic, "Earthquake, Italian Style".  And no, she is not interested in a musical biography of Benito Mussolini.  What does she want, he persists.  Debra gives her standard answer.  He offers her the roll of a mink rancher who gets stuck in a Swiss ski lift with a man from Save the Seals.  The drama centers around the couple's ideological split on the fur question and how it relates to world communism, the state of the arts and Debra's pouty lower lip.

Debra says she will think about it.  Men are too ridiculous!  ISN'T IT ENOUGH THAT SHE IS BREATHTAKING?  MUST SHE WORK, TOO?  She puts the receiver in the cradle.  That's that.  Debra cuddles up in the boa.  But already she has a vision of herself, not so much as a box office heavy but as a box office heavy in one of those What-becomes-a-legend-most? ads. (They say they let you keep the mink.)

Before long, with the boa caught up in a most provocative convolution, she falls asleep before a window.  Bright sun wakes her.  Debra must think things out.  She puts on her naughty lingerie with the gold gizmos and slides into her Lamborghini.  No one will be startled by her traveling briefs.  Everyone in Los Angeles goes about in bikinis; that's how Debra once explained her scanties to a police officer whom she had asked to tell her the way to San Jose.

He saw the sheer bikini, and they never did get around to San Jose.  They dated.  He was an ex-surfer and showed Debra how to hang ten- without a surf board.  Debra already knew that trick but played dumb, give or take a few moans.  A star performance.  Yes, Debra tells herself, acting may be her forte.
The Lamborghini turns onto the freeway, that great conveyor belt where LA does much of it's thinking.  It's smooth, hypnotic transitions empty the mind (which explains the type of thinking done in LA).

Motoring aimlessly, her destination nowhere in particular, Debra arrives at a decision almost by psychic osmosis.  Without really willing it, Debra is back at the beach house.  ON THE COUCH, WAITS THE MINK TO BE TOYED WITH.  The phone rings. Debra knows who it is and will accept his offer.  What becomes a legend most?  A beauty whose time has come.

This always grossed me out. Even though she wasn't hideous, she still looks like a butterface. Top that off with how she looks now and I want to vomit. She no doubt used the notoriety of her last name to spead her legs for $$$. That not only makes her no better than anyone else who has exploited the case for money, but a scumbag.

How could she afford a Lamborghini, a mink, and a beach house?

This is just a fictitious story, like the kind you probably find in Penthouse forums. I think she definitely had a wild past, but a lot of people have. I don't like to judge her as harshly as others. I don't know DT, and won't pretend to. There are plenty of skeletons in people's closets, including her. Of course, I think her decision to pose with her starfish out was way more rebellious than anything I would of done! Her parents were probably mortified. I do wonder if this "spread" (pun intended) was the cause of her family strife?

Funny, I thought of Penthouse Forum when I read this. Yes, it's just a story contrived for blockhead readers of those magazines. I'm sure she had no input.

I think that those who find fault with Debra Tate do so because she is so quick to judge others' motivations in profiting from or exploiting of her sister's death when she has on countless occasions done many things that could be just as easily construed as the same thing - Were they? I won't judge one way or the other, but if you're going to attack others' motivation you should expect to have your own motivations attacked.

My opinion is she brings this judgement on herself because if she wasn't so self-righteously condemning others, she would never come under the scrutiny thrown her way. Just to name a few:

She condemns her niece Brie for using the last name Tate when her daughter is doing the same thing -
http://www.modelmayhem.com/1857074

Back in 2005/6 she (and Robin Olson) bullied, attacked, and threatened every blog/website out there who ran pictures of Sharon claiming only she had the right to post pictures of Sharon because she owned Sharon's estate - which is false - anyone else remember that period?

She accused Alisa Statman of wanting a bill passed (allowing family members to assign anyone as their designated speaker at parole hearings) when she uses the very law to (possibly) gratuitously attend Van Houten, Davis, and Beausoliel's parole hearings.

And, she attacked her niece Brie for publishing the book strictly for financial gain when she, through her website, has been selling calendars, BBQ aprons, coffee mugs, and license plate holders with Sharon's photo on them at her Shop Sharon website for profit.

As the saying goes, those that live in glass houses shouldn't throw rocks.

Cindy some of that is news to me...

I never totally understood Deb, and certainly she has made some bad decisions...

She gets some room for error from me due to what she had to go through, as long as she doesn't hurt anyone.

Nothing she ever did seems to me bad enough to warrant the outright hatred some show her- though granted some of these deeds Cindy mentions are beyond self centered, and actually could be hurtful to others.


Being totally honest - I think she is sort of sexy in this pic...

The pictures were in bad taste and came at a bad time. I still think Debra was the real beauty in the Tate family (in her younger years).

Dooger said...
This always grossed me out. Even though she wasn't hideous, she still looks like a butterface.

LOL. That word always cracks me up "but her face..."

She looks a little smacked out.

Debra's mouth seems to have a natural frown or maybe she frowns she doesn't really have a Lamborghini, a mink, and a beach house.

I never understood why she attends Bruce Davis's parole hearings. One of Gary Hinman's relatives even wrote a letter to the parole board stating that she did NOT give Debra Tate authority to speak on her behalf. I think Debra should definitely go to Tex and Pat hearings only. There is no point in going to the others. Of course, on the other hand, all of those people were involved as a group, and maybe she feels that she needs to stand up for all the victims! I just don't know.....

Why didn't Robin....I mean Vera jump in on this one to protect Debra's honor???

Guess there's not a whole lot she could say.

No need to be nasty about a woman's looks.

Interesting it was all one paragraph. Goes to show ppl's attention spans have deteriorated, just as Ray Bradbury said in Fahrenheit 451.

It is a stupid mindless story. Wow, the 70s. And it is a horrible set of snaps. So crude.

I think she was sexy hot in those pics! The Tate girls were all fine in their own right!

ALL the Tate girls were stunningly Gorgeous. People are jealous the Tate women won the genetic lottery and they didn't. Debra Tate is doing nothing wrong and amazing there is such hatred for her from rando stranger trolls who need a life.