It has been a treat to follow Claire Vaye Watkins become a respected author who has been honored by her peers over the past year.  In March of this year Claire won the $10,000 Rosenthal Family Foundation Award and the $20,000 Story Prize Award.  Well, she has done it again!  On November 7 Claire bested six others, in the eyes of the judges, to win the prestigious Dylan Thomas Prize and $48,000.  Not bad for a girl from the desert whose father, Paul Watkins, was touted in the press as a major player in the "Manson Family".

Judges said she was an "exceptional" writer and described her collection Battleborn as "infectious".

The California-born 29-year-old was one of seven writers aged under 30 shortlisted for the prize.

The prize, based in Thomas's birthplace of Swansea, is one of the largest literary cash awards in the world. 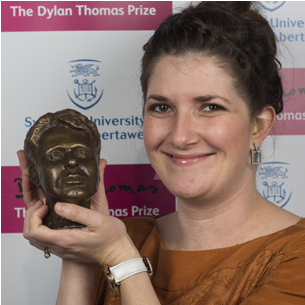 WOW! She really is something else. Nice photo: she looks truly happy.

yowza, I'm stunned. I didn't like the book at all. Goes to show what I know. But then I didn't enjoy Alice Munro's 'Dear Life' either and that has won a ton of awards too.
But as Patty says, good for her, she certainly appears to be a lovely person.

calling my curiosity savior, CarolMR, how did Claire's book sell? There's gotta be an upswing with this award.

She is a VERY good writer.

I haven't read the book but I've read something else of hers that was posted here recently.

If you look at the pic of her from far away and/or different angles, you can see the resemblance.

I hate to be a "Blog Hog," BUT what could be more relevant to the MANSON case than "teaching" "programing" "brainwashing" ?????

"I have a real problem with people who talk 'nonsense' and 'demean others' while 'elevating themselves' to the mantel of "out of the box thinkers."

And of course, kids are NOT all that stupid - they can sense when they are being dropped off with the babysitter. But most parents are ignorant of the fact that IF you at least "teach" your kid how to read and do simple math before they enter kindergarden, their kid will have had, at least, a chance to experience some time "thinking outside of the box" before they are locked-up in the box for the next 12 years.

Where did "Claire" get her "out of the box" thinking/ambition to "write" books? couldn't have had ANYTHING to do with her father - only a "teacher" could inspire her for that.