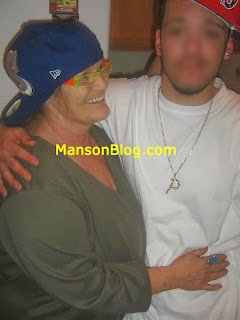 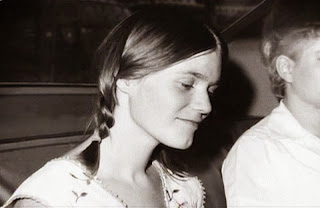 Good, how about some new Ruth Ann Moorehouse pics? :D

From what I can tell, her family is quite diverse these days. I'm sure one of the kids slapped that on her!

Anyone see "BlackList" last night. It was about a "rejected" child who grew up to "create" babies and have them placed in middle class homes all accross America. Made me think: What IF Charlie Manson was - by proxy - placing himself in the life HE never had, in homes all over the place?
Will WE ever know where ALL the new and improved Charlie's are living?

HOW do you guys do it? I'm impressed, Thanks!
She, to me, is the most intriguing female member. I wish she would write a book. Although I'm sure it would be full of BS.
Is her nose pierced?

Snowing in NC. Just a dusting so far mind you. Car accidents abound. I'm dead stopped in traffic. The grocery stored are right now looking like stores in Soviet era Russia, and I guarantee no school for a few days. Unreal.

I don't think Linda will be writing a book any time soon, if ever. She, along with the others convicted of the Tate murders, is named in the civil suit that Bartek Frokowski won against all of them and there is still a hefty outstanding balance. If she wrote a book she wouldn't see a penny of the proceeds. It would be nice if she did write a book if only to pay her debt but if it hasn't happened by now it probably never will.

Interesting Deb that Linda is still in debt to the Frykowskis. Patty wonders, a few years back, did a TV network pay for her appearance on Larry King, or did they just get her a plane ticket and a fancy suite? How do statute of limitations work for criminal vs. Civil suits? Thanks for sharing all your cool knowledge with us.

Great to see some new pix of OG family members!

Patty, Bartek has an attorney that keeps the civil suit alive. Apparently the suit continues until the debt is satisfied. The last paperwork I saw on it was from 2009 when Susan Atkins paid about $1,500. to Bartek. It still has a giant balance though.

I believe Linda's a great-grandma now. She looks happy and content.

Bartek died a strange death just like his father, Bartek's daughter is the one that now receives the money.

How did Bartek die?

From his Polish Wikipedia page, after running through Google Translate:

He died from knife wounds on the night of 7 to 8 June 1999 at the estate Karolina Wajda in Gluchy (in family court Norwid). Investigators concluded that it was a suicide death. He was buried in the Old Cemetery Street. Garden in Lodz.