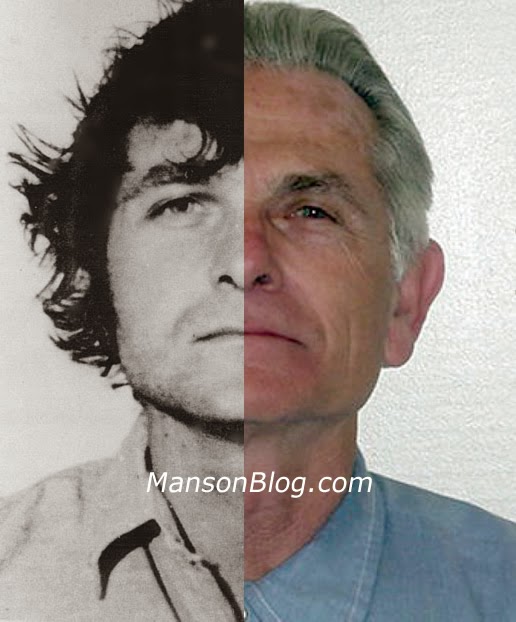 Yes indeed an eventful week as might have been expected.

Great news that you have got a record number of join-ups. I just wanted to say that I am leaving and wish the very best to those who I have 'met' here and wish you 'happy blogging'.

Yes, nice work DebS! I'm sure this Bruce Davis's parole woes are far from over. Too bad though that the victims' families have to continue to endure this.

Re-read the first paragraph to the "Statement of Facts." He WAS a MEMBER of the Manson Family.

AND then he spent his precious REHABILITATION time / opportunity becoming more involved in RELIGION. If it was a "conservative" governor, HE could have been pressured into playing the "JESUS saved Bruce card."

So Why Oh Why didn't Bruce SEE his only chance for release as coming from a KNOWLEDGE of the LAW ? If instead, HE got a degree in LAW. HE, would at lest, have a chance at FREEDOM.

Same applies to LESLIE, SUSAN, "Tex" and even CHARLES MANSON. None of them have spent their VALUABLE prison time learning how to PLAY the game. It's like spending 40 years learning how to play CHECKERS so you can be a better CHESS player.

I know why Manson does HIS gig, BUT the others - it's like THEY are still FOLLOWING the beaten path to nowhere. Even the illegal aliens making the dangerous journey across the desert have to a better life have a mission. BUT becoming a PRIEST - you think "Jerry Brown can SEE himself "kneeling" before BRUCE or TEX.

Lastly - Bruce did NOT kill for Helter Skelter, BUT he helped make the book-ends to the whole "Crime of the Century." He was there "a member" for the whole "Real Deal." AND in the eyes of the LAW, that's a BIG deal.

Is the Anniversary Celebration over ?

EQ is leaving, the comments are diminishing, HE drifted in, had a cup of coffee and a few words (IE: "Manson Family BAD" ) then hit the information highway. So I was thinking and WaLa: He was a "drifter," probably traveling the world "internet" in search of the answer to life itself. Just like Paul Watkins, when HE stumbled upon the Manson Family in Topanga Canyon.

BUT are WE not ALL just drifting from one thing to another. Even a movie producer "drifts" from one movie to another. DRIFTING - "I'm just a "drifter" wondering the internet in search of ??????

Well Mr. H, EQ actually LEFT in a search for knowledge. He has exams to study for. :)

the resignation of Richard Nixon, the President of the United States, on August 9, 1974 — the only resignation of a U.S. President to date. The scandal also resulted in the indictment, trial, conviction, and incarceration of 43 people, dozens of whom were Nixon's top administration officials.

ALSO an American-History milestone ,an Anniversary of an August 9. EXCACTLY 40 years ago today.... But in a strange kinda way not SO much attention. Although the Nixon periode was also in the Manson era, or vice/versa.

Owhhh and BTW, I have asked myself this for few times,:What did Manson sayd or thought about ,,WaterGate,, and the whole Nixon resignation ? ? Nixon was not one of Mansons favourite US Presidents after all. Are there any documented words,pictures,interview, with Manson about this ???

I just heard the news about Robin Williams. What a shocker.

Yup. This epitomizes him for me: http://www.anyclip.com/movies/patch-adams/performing-for-the-kids/#!quotes/

EXACTLY Matt: And EQ set me to thinking "Drifter" You might be too young, but growing up at the Saturday matinee movies in the fifties, the COWBOY / Gunslinger movies almost always had the STAR being a "Drifter." Just think of the more recent Clint Eastwood in "High Plains Drifter." Of course, SHANE is the most famous of them all. "The "drifter" always stood-up for the littler guy and the females loved HIM. The question is: Why was the HERO always a "drifter" and in search of WHAT ?

I mention all this because WE of the fifties (including the Manson Family) grew up with this morality play pumped into our little brains by the likes of "bigger-than -life" movie Gods on a weekly basis.

THEN, the Vietnam War came and CHANGED everything WE were taught. The "Anti-hero" became the new God and OUR "programed" value system was tossed on it's head. The police, who we were taught would carefully walk us across the street, began to beat us with Billy-clubs - just for looking different.

In LA we NOW have video of a CHP officer, on top of, and beating a 51 year old homeless black woman in the FACE, with his big burly fists. AND hardly anyone can figure out what Death to Pigs was meant to mean.

I just heard on the radio "Leo the Teck Guy" say: "Learn to Learn and learn to THINK." That that is going to be the "education" necessary for survival in the new tech world. Amen