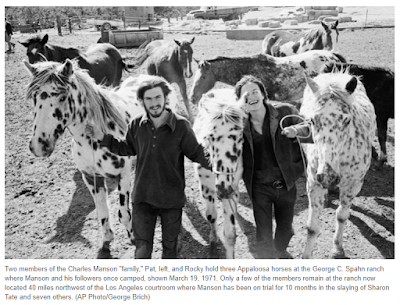 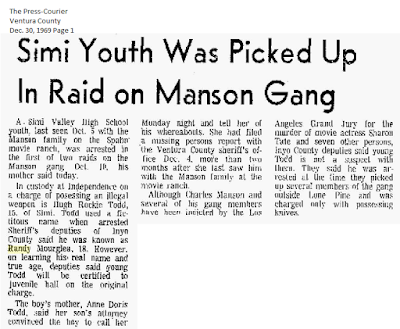 I have seen this Photo on the Net quite a while back... even saved it in ,,Manson,, folder on my Laptop. My thoughts were they were Ranch-Hands. And just did not belong to the Manson-Clan, just as more others at SpahnsRange. But now you say that Hugh dude was arrested at the Barker Raid... Yeah then he must be a part of Mansons clan. THANKZ Debb !!

I thought cold cases were unsolved ones :-)

brownrice, that whole cold case convention seemed less about solving cold cases than having authors come and shill their books. I would expect that there would be at least one speaker on the way the Golden State Killer and now other unidentified killers have been brought to justice through forensic genealogy.

I mistook Rocky for a girl.

I mistook Rocky for a girl

Thanks for the response, Deb... and the initial post.

Hugh "Rocky Todd" Morglea was the one recruit they managed to snag from the FOTW, thanks to Krenny's efforts.

I wonder what came of Rocky? I know there is a Rocky in Death Valley but that's not this Rocky.

There are numerous mentions of a Randy Morglea in North Carolina if you Google...this hit is mentioning a son born to this womam who was, herself, born in 1929...making her 22 in 1951 when Rocky was born.

I updated the post with a newspaper article about Hugh Todd. Randy Mourglea was an alias that he used when arrested at Barker. He was only 15 years old when arrested. He was born in North Carolina but has lived in California since he was a child.

I was researching some of the more obscure family members a year or so ago, and I'm pretty sure I ran across Hugh Todd's obit from 2016 in the Porterville, CA area. I believe he was 62.

Blogger starviego said...
Hugh "Rocky Todd" Morglea was the one recruit they managed to snag from the FOTW, thanks to Krenny's efforts.

Imagine how many Ruth Ann or Cappy could have brought back.

I was researching some of the more obscure family members a year or so ago, and I'm pretty sure I ran across Hugh Todd's obit from 2016 in the Porterville, CA area. I believe he was 62

That would have made him 17 in this photo.

Yeah, thats him. He passed.

Here is a picture with him at the Hall of Justice in January of 1970
https://tessa.lapl.org/cdm/singleitem/collection/photos/id/8620/rec/1

You can always spot the obscure ones. They have shoes on.

Who's that guy next to Ruth Ann Moorehouse ?? ALSO a shoe wearing obscure one ...lolololol

I'm not seeing any pictures with the link Cielo posted?

I'm pulling it up just fine...

Just to add something to the original post a new 2 part documentary aired recently as part of a series called "Very Scary People" (great name right?). I'm only about half way through it.. so far its the same old stuff but Dianne Lake makes an appearance as does Gregg Jackobson. There's also some interview footage of Charlie that i don't think i've ever seen the full version of so there might be some new stuff there.

Hi Matt!
:oD
Thank you for your reply and making it so I can click on it to see the picture too.

Question...
What happened with the profile pictures? Why is there these weird looking B in yellow circles appearing instead of our pictures?
Anybody know??
:o/

HellzBellz said...
Who's that guy next to Ruth Ann Moorehouse ?? ALSO a shoe wearing obscure one ...lolololol

I think that's Little Paul Watkins on the viewer's left, wearing shoes and Clem on the right. If I'm wrong, I've been wrong for a long time.

I've been curious for sometime, did they really let people into the courthouse and especially the courtroom barefoot? I graduated high school the year of the murders and was fortunate enough not to spend much time in courthouses so I don't remember.

I think that's Little Paul Watkins on the viewer's left, wearing shoes and Clem on the right. If I'm wrong, I've been wrong for a long time.

The guy on the left is also in a few other pictures, but it's definitely not Watkins. Clem is in the middle with the street sweeper bell bottoms, and Hugh Rocky Todd is on the right. I believe the woman on the far right is Barbara "Bo" Rosenberg.

Is Rocky the guy with the bandana around his neck? I would say the guy on the left is Watkins but Watkins was a lot shorter than that guy. Remember all kinds of people were drawn to the Family when they were arrested and started being covered by the press. That guy is probably some random groupie/hanger-on. I read somewhere Rocky liked Krenwinkel because she would talk about horses with him. Refreshing that he was hanging around for something other than easy sex.

Hellsbellz, I believe Rocky was arrested with Grogan sleeping in gully with a sawed off shotgun before the raid. Grogan and Todd had been ordered by Manson to hunt down two girls running away from Barker Ranch. Luckily they were arrested before catching up to the girls. I don't remember clearly who the girl but were they Lutesinger and Schram?

OT
For what it's worth, I found "House of Manson" is free to watch with my Amazon Prime account. I haven't watched it.

Thats excactly my thoughts on Paul Watkins...The guy is way to Tall/Bigg.. and I could be verry wrong but by that time werent Paul Watkins & Brooks Poston at their Crocket Guru Guy ?? preparing to Testify against Manson&Family ??

We just watched the haunting of Sharon Tate. So bad. So, so bad.

HellsBells,
You're probably right. It occurred to me that Paul might have been in the desert too. Pictures can be tricky so I ignored the apparent height difference.

@ Orwhut For what it's worth, I found "House of Manson" is free to watch with my Amazon Prime account. I haven't watched it.

And yeah , Pics can be tricky, you right . But if you look closely you can see that the Guy stands Behind/Next to Ruth-Ann... And it clearly shows He is quite a lot taller. In comparisson maybe even as Tall as Clem Grogan. Well annyway, chances are He is one of the Hanger On as Beauders sayd before ...

It was truly bad. The only marginally good thing about it was the stunt casting of Lydia Hearst as Abigail Folger.

She is a really awesome person.