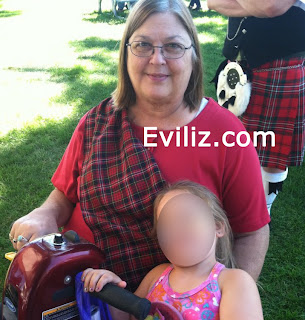 I was taught the "If you don't have anything nice to say" by my Momma so this time - you all choose the caption.  I will say that she looks like she lost a ton of weight. Or is the kilt shes wearing slimming?   I bet it was to look good at Bruce's hearing. A little bird told me that was why Bruce called out sick.  He chose to pass on sitting with Debra and Barbara when he found out they were there. What does everyone think about Barbara telling she heard poor Shorty's screams, but  the time she claims she heard them were completely wrong with the killers time line. Did Barbara lie? Or as The Colonel says, does she just want attention? Or did the killers lie? Maybe that burger caused some damage to the memory part of her brain? Do you think she still eats burgers? And if so, does she look under the bun now? Maybe the site of a hamburger cause her flash backs?

Is she sitting on one of those electric wheelchair like devices?

orwhut said...
Is she sitting on one of those electric wheelchair like devices?

Good observation!
Where will Barbara's Hover Round take her? Up Goler Wash? LMAO

Picture Charlie riding on the back!

She could use a full body shave, too. Look at them arms. Krenwinkel has nothing on her.

I can never figure out why people like the Col etc have to bring up if someones fat as a reason they would lie...what the fuck does fat have to do with telling the truth?

Hey Candy. I've never heard anyone say that she lies because she is fat.

I have discerned on my own that her account of Shorty Shea's screams do not match up with what is in the documentation - Clem's parole hearing for instance.

I have also discerned on my own that she is overweight, but I don't think it is why her story doesn't add up. :)

Like I said though- maybe she told the truth and the others lie.
We will never know.
Fat comments, I don't get. I am not a skinny minny nor am I obese and you can call me fat all you want, does not bother me.
I can always diet but am comfortable in my skin.
I think people pull out the "fat card" when there is nothing else to say bad about someone.

I remember when Matt was posting the trip pictures, now don't forget the camera adds 10 pounds, lol-
I told Matt I looked fat in all the pictures and he said "It is what it is." Why I keep him around I don't know. ;)

Hoyt has always been a portrait of apathy to me. She’s equal parts witness for the prosecution and passive participant while ultimately being ambivalent about testifying at a murder trial, by traipsing off for a ‘free’ trip to Hawaii.

Who could actually consider, let alone enjoy, some journey to a sugar white beach knowing some details about a man’s murder? Her concern for victims seems to be too little or displaced and too late. Perhaps it’s her way of subconsciously atoning for such ridiculous conduct during the trial.

If a person was trying to design a caricature of a ‘Manson Zombie’, then Hoyt would certainly contribute more than the average person’s share of ignominious traits.

Point of order Eviliz: I don’t believe women wear ‘kilts’ they are just called skirts since their sexuality is not in question. Not that there’s anything wrong with wearing a kilt, thigh length silk stockings and a bra, as a defiant symbol of one’s masculinity. There now, I think that clears things up.

Liz your a voluptous doll dont lie ya Im no skinny either and I agree when people dont know what to say they say people are fat or hairy always comes down to this kind of comments but its this way in life I mean Ive said it myself called people fatasses Im just saying...

Farflung said...
Point of order Eviliz: I don’t believe women wear ‘kilts’ they are just called skirts since their sexuality is not in question. Not that there’s anything wrong with wearing a kilt, thigh length silk stockings and a bra, as a defiant symbol of one’s masculinity. There now, I think that clears things up.

Not true. I wear a kilt every Tuesday, Friday and Saturday night!

candy and nuts said...
Liz your a voluptous doll dont lie ya Im no skinny either and I agree when people dont know what to say they say people are fat or hairy always comes down to this kind of comments but its this way in life I mean Ive said it myself called people fatasses Im just saying...

TY
My bff and I have a rule "If someone elses is bigger than yours, it's ok to talk shit about it."

So women can wear kilts after all. I’ve been carrying around that incorrect information way too long.

Perhaps an apropos caption would include some gentle and poetic nuance which embraces the moment which marries whimsy and irony:

Maybe the hairy arms qualify her to wear the kilt!

Here's a thought....What if the screams Hoyt heard were at nite, but not Shorty's? Not too far fetched to think maybe she heard someone else being murdered.

Wasn't Shorty supposed to be 6'5" tall? And weren't the remains Clem led the police to between 5'9" or 5'11"? Do skeletons shrink, or could this be another victim?

When she goes into McDonald's or Burger King does she say hold the pickle, hold the lettuce and no LSD please.

Does anyone have a reliable source for Shorty having been 6'5" tall, like military records or something. All I've been able to come up with, is a Wikipedia article that lacked a citation.

She doesn't have any reason to lie. Why would she want attention? She isn't a freakin teenager, who is dying to be noticed. I think she did hear somebody screaming. I live in an area that has a creek running through it, and the terrain looks very similar to the Spahn Ranch. Sounds travel through the creek all the time. I have no doubt that this woman did hear screams. Sh*t, these people were murderers. Who knows if it was Shorty, OR some other victim. Just because CLEM, or BRUCE or any of the other killers stated at parole hearings that they killed him in a car, up the street from the ranch doesn't mean it is all together true. These people's word has not exactly been truthful up to this point. Remember, there are still unsolved cases from that area. Also, the people writing comments about this woman's weight is not surprising. It is easy to hide behind a computer, and type whatever you want, even though I am 99.9% sure that NOBODY on this blog, or any other one has a PERFECT physique, absent of any fat, pimples, hairs, boils, scabs or anything else......Hell, you might be a walking skeleton, but I bet your poop smells just as bad as the next human.

Ann Ive thought that too I mean why would she lie knowing especially her size that she would get alot of ridicule, would been alot easier for her to just stay out of the limelight, besides she almost got wasted for talkiing before

I don’t know how I would act if I found myself as a witness at a murder trial. Obviously someone lost their life, and the liberty and life of another person or persons in now under the full weight of the finest judicial system created to date. Would I feel ‘nothing’?

I would have to imagine that the task of participating in such an activity, would consume many of my idle thoughts, while concurrently placing a much lower priority on other things in my life (vacations, parties, being reflective). Perhaps I’m simply no good at compartmentalization. I dunno.

Ruthie put an LSD tab in her hamburger, which, to no surprise, she ate anyway. Wasn't like she planted it in the Spinach salad.

If only they had youtube and smartphones back in that day. Wouldn't it be great to see her wandering about on that day?

Austin Ann- Why does anyone want attention? Why did dozens of people pretend to be Stymie or Buckwheat for fuck's sake? She's a lonely fat housewife who probably doesn't even get time to watch Oprah. Her one claim to fame was Manson- if she rates an obit his name will be in it. It is human nature to try to matter. Most people don't. Babs sure doesn't. But she thinks, maybe if I help keep people in jail who are never getting out anyway, I will matter.

Yeah. What he just said. In the end game, we all want to matter!

Col kinda like you using this name in your blogging,,,,vicariously living thru Charlie ....

Nuts
I never said I matter. I don't really think about whether I do or not. I have a good job and a beautiful wife I care about. I also have a blog that is 100% for me- for what I want, which is the truth about TLB.
ColScott is where TLB begins. That's why it was chosen. Having been at this since the beginnings of TLB internet research I feel like a granddaddy. But if I go, I don't know that my work has mattered. It made ME happy though.

You are right, I was wrong...Sorry

Austin ann says... I am 99.9% sure that NOBODY on this blog, or any other one has a PERFECT physique, absent of any fat, pimples, hairs, boils, scabs or anything else...... Euhhhhh I AM THAT 0.1 percent .... LOL !!! But anyway...Thats not a Full Kilt Ms Hoyt wears there, Just a Wrap.....Nad in all kinda way, and whatsoever,...I do think Hungry Hoyt is doing a Good Job and givin her two cents, to let stay those Animals IN !! Have a Good Day !!

Hi...year-long lurker. Why the hate-on for Babs? Anyone ever think she feels horribly about the time she spent with these tricks? How it affected her psyche? She doesn't seem to be an attention whore ala Deborah Tate. So, what gives?